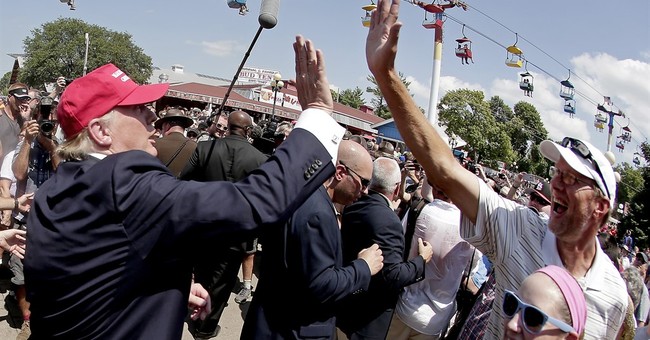 Donald Trump's six-page platform on immigration may not be, as Ann Coulter wrote, "the greatest political document since the Magna Carta." But given the issue's role in elevating the candidate to leading Republican polls, it merits serious attention.

And at least some of the platform's planks are serious. Trump calls for nationwide use, presumably mandatory, of E-Verify, the government system that is supposed to enable prospective employers to verify a job applicant's immigration status.

He also calls for completion of a visa tracking system. About half of the nation's estimated 11.3 million illegal immigrants (Pew Research Center estimates, not significantly changed from 2009 to 2014) are people who entered on valid visas and have stayed past the expiration date.

There's only one problem here: gummint don't do IT good. Example: healthcare.gov. Example: the FBI system abandoned after millions were spent. Example: the NextGen air traffic control system that went on the fritz last Saturday and stranded thousands at New York and D.C. airports.

Unfortunately, Trump the businessman did not accompany these reasonable proposals with suggestions about how to get government IT working.

Trump makes sense too in calling for outlawing sanctuary cities, though his remedy (withholding all federal funds) might not be the most effective. And ending catch-and-release of illegal border crossers seems like a no-brainer.

However, some of Trump's proposals are, as Bloomberg's Megan McArdle writes, "a farce."

"End birthright citizenship," he says bluntly. There's an argument that the Supreme Court erred in its 1898 decision declaring that the Fourteenth Amendment grants citizenship to everyone born in the United States (except diplomats and the like).

But that argument isn't going to sway the Court anytime soon, and amending the Fourteenth Amendment requires two-thirds votes of both houses of Congress and ratification by 38 state legislatures. Ain't gonna happen.

Trump calls for building "a permanent border wall," even though that's technically unfeasible in some places (such as along the Rio Grande) and declares, "Mexico must pay for the wall."

That sounds good in TV debates and on talk radio. And there's a wisp of justification also for his claim that Mexico has encouraged illegal immigration to the United States. Mexico does seek to protect its citizens in this country and provides them with "matricula consular" documents.

But Trump's argument that the U.S. can make Mexico pay by increasing border transit fees and impounding remittances from illegal workers is unrealistic. Will banks and Western Union be required to determine the legal status of depositors and customers? Will the government confiscate money deposited into U.S. bank accounts of workers' foreign relatives?

What may be most important about Trump's six-page platform are the things he misses -- such as the fact that immigration from Mexico is sharply down from the 1982-2007 surge. Net migration from Mexico to the U.S. in 2008-2012 was zero and any subsequent rise minor. Nor has Central America produced an offsetting surge. China and India each account for more immigrants than Mexico in recent years.

Nor does Trump address the fact that current immigration law has more places for collateral relatives of low-skill immigrants than for immigrants for whose high skills there is market demand.

He gets bogged down instead in a complex proposal to increase salary levels for holders of H-1B visas. He's probably right that for a few big high-tech companies H-1Bs are a source of indentured labor that costs some Americans higher-paying jobs.

But the solution is to ditch the H-1B formula that tends to tie down high-skill migrants to specific employers and substitute something like the Canadian and Australian point systems that provide more places for high-skill immigrants -- and let them contribute to free-market growth any way they like.

The most unrealistic Trump proposal is his call for "a pause" -- of unspecified length -- in issuing green cards to workers abroad, "where employers will have to hire from the domestic pool of unemployed immigrant and native workers."

That's a nod to history-minded immigration critics Pat Buchanan and Ann Coulter who argue the 1924 immigration act provided such a "pause." But much of that "pause" came during depression and wear, when immigration would have been minimal anyway. Shutting high-skill immigrants out today is cutting off one's nose to spite one's face.

Some of Donald Trump's prescriptions make sense. But too many result from misdiagnosis and would transform treatable illness into wasting disease.