Mamas, Don't Let Your Babies Grow Up to Wear Uniforms 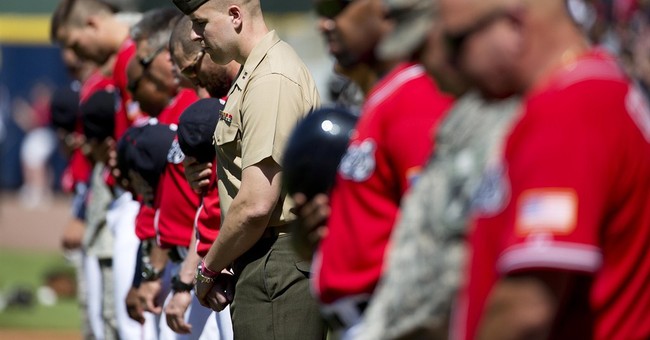 That's the real message, isn't it? Whether it's the young man or woman who chooses to join one of our military branches or anyone who decides to protect us from harm locally as police or sheriffs or deputies, it's becoming increasingly clear that wearing a uniform makes you a target in today's America.

This isn't about the relatively few police officers who knowingly do wrong. Nor is it about past military incursions. The issue at hand is a growing sentiment among an increasing number of Americans that anyone in a uniform is not to be trusted or given a break or to receive the thanks that they deserve.

Consider the Marine woman who was convicted recently in a court-martial for displaying some Bible verses at her desk. Admittedly, it was a desk she shared with others, but the evidence that they too had their own objects and trinkets at the desk was ruled inadmissible at trial.

She's out. She has a black eye on her record, and as of last reports, she has no job. Thank you, ma'am, for your service. A grateful nation casts you aside because, after all, you're not some kid who chose to steal from a store, run down the middle of a street and ignite a national controversy. You're just a woman who wanted to serve her country and express her personal inspirational faith in a small and unobtrusive way.

Of course, her plight is much worse than that of another service member who was dressed in uniform and dared in recent days to enter the posh bar at New York's upscale hotel The Standard. She was from the Navy, and she was told by the bouncer at the establishment that she could not enter because, "Hey, man, there's a dress code."

Oh, I'm sure there is. I can only imagine the "dress code" one might see there on a Friday or Saturday night. Of course, the "top brass" at the hotel reversed engines in a hurry once stories of this insult reached the news.

And then there are those times when following a legitimate dress code leads to much more -- like the cold-blooded murder of a New Orleans police officer.

Officer James Bennett Jr., who was working the area controlled by the Housing Authority of New Orleans, was shot to death this past week while he was sitting in his patrol car. No chance for him to put his "hands up," as they say. Instead, he caught a cold-blooded coward's bullet that took his life.

So let's just say what is really going on here. We have a new culture that has made it uncool to be in the military or to display patriotism, much less to suggest that there is something exceptional about America.

And it really isn't in fad to be a Christian (of any denomination) because we're standing by and watching Christians get slaughtered by terrorists with virtually no show of outrage by our leaders.

Who wants to be in the military knowing that our current leadership has an understated but oh-so-clear belief that removing American troops from unstable areas of the world is far better than having them keep control of areas we finally liberated, such as in Iraq? No, no military uniforms needed.

And who wants to be a police officer when that uniform can mean sudden death at any moment, and reaction to any situation could lead to criminal charges against you? No, no uniforms needed for that thankless job anymore.

We all know there are problems in our criminal justice system, and we also get the fact that most Americans grew war-weary after the George W. Bush years. But it hasn't been since the late 1960s that we've seen outright disdain, or at least lack of proper respect, for the men and women who wear any type of uniform to keep us safe.

But rest easy. At least the government respects the Taliban. Five of their top leaders will have their travel rights restored next week. And they won't need a uniform.