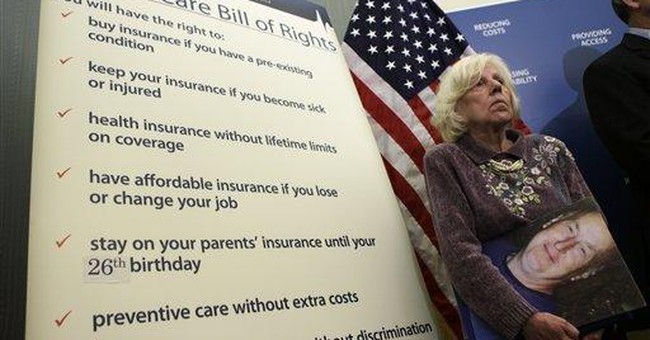 Democrats have done a good job portraying Republicans as health-care-reform obstructionists. Rep. Chris Van Hollen (D-Md.) gave the party line, for example, when he told Talk Radio News service, "There is no Republican health-care plan out there."

In fact, the GOP has offered several health-reform bills. And on Nov. 3, the party's leaders in the House unveiled a comprehensive reform plan, introduced as a substitute amendment by Minority Leader John Boehner (R-Ohio) -- which Democrats defeated 258 to 176 on Nov 7.

One key aim is to lower health-care costs with, among other measures, medical-liability reform and the creation of an interstate health-insurance market.

According to the Congressional Budget Office, the GOP plan would indeed "reduce average private health-insurance premiums per enrollee in the United States relative to what they would be under current law."

The GOP plan has several advantages over the Democrat-crafted bill that the House passed. For one, it would impose no new taxes, where the Democrats' bill hits taxpayers for another half a trillion dollars over 10 years.

The plan contains no mandates for individuals or employers to purchase insurance, where House Democrats would force every citizen to buy insurance or pay a hefty fine (plus possible jail time).

True, as The Washington Post points out, the Democrats' bill "would expand coverage to an estimated 36 million of the uninsured," while "the Republican alternative would cover only 3 million." But that is only a weakness if you accept as axiomatic that 1) everyone must have insurance, and 2) that the government should provide and/or enforce insurance ownership.

What the GOP plan does do is use market forces to lower the costs of insurance premiums so that more people who want insurance can afford it.

According to Rep. Ryan, the plan's "interstate shopping" provisions would have the most dramatic effect. Today, people not covered by a large company insurance plan (and who don't qualify for Medicaid or Medicare) are stuck buying a policy in whatever state they live in. A 2008 study from the University of Minnesota, however, found that "allowing for a national market where anyone can shop for health insurance in any state" would increase the number of insured by "just over 12 million."

New Yorkers, in particular, would gain -- because state regulations have pushed the price of such health policies out of reach of average incomes.

The GOP plan also includes reforms to the nation's medical-liability system, including "a statute of limitations on bringing a case" and a "cap on noneconomic damages to $250,000."

Texas passed similar reforms in 2003 and 2005. According to an April 2008 study by The Perryman Group, these reforms led to an additional 430,000 Texans obtaining health insurance, and also created nearly half a million new jobs.

If the goal of health-care reform is to insure every citizen, then the GOP proposal comes up short. But if the goal is to make insurance more affordable for tens of millions of Americans, the GOP plan does just that -- at little or no cost to the taxpayer, and without a government take-over of one-sixth of the US economy.