Barack Obama and the History Books

Matt Margolis
|
Posted: Sep 03, 2016 12:01 AM
Share   Tweet
The opinions expressed by columnists are their own and do not necessarily represent the views of Townhall.com. 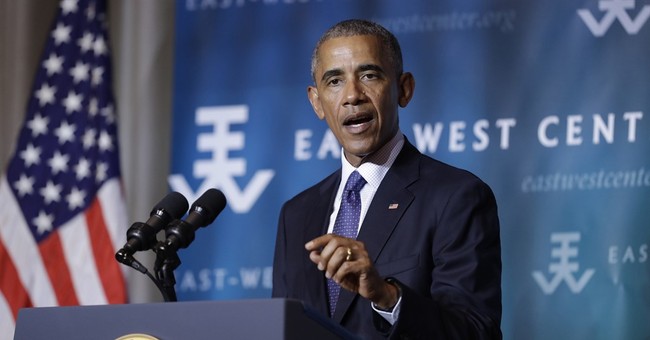 What will my son be taught about Barack Obama?

At two years old, he won’t remember the Obama years, but he’s most definitely going to be taught about them outside the home one day. Liberal bias in schools is well known, and one can only imagine just how slanted curricula will be about the 44th president.

When I was in school, I can remember being taught whoppers like: the Second Amendment only applies to militias and/or muskets, the Founders wanted to keep religion separate from the public square, southern Dixiecrats all became Republicans, and Franklin Delano Roosevelt ended the Great Depression. Kids today learn that Bill Clinton was impeached over sex, the Supreme Court gave George W. Bush the presidency in 2000, and the 9/11 terror attack was the fault of the United States, amongst other patently false things.

I dread the day my son goes to school. Among all the other historical fallacies he’ll be taught, I know very well that, when he and his classmates are taught about the first black president, he’ll encounter a politically correct, rose-colored version of the Obama years. It will sound something like this: “Barack Obama was elected during the worst economy since the Great Depression. After his stimulus saved us from a second Great Depression, he signed into law the Affordable Care Act, giving millions of Americans access to health care. Obama restored America’s standing in the world, made us safer, and united our country against all odds, with a Congress doing everything it could to stop him.”

In fact, the rewriting of Obama’s legacy is already happening, and adults who should know better are swallowing the misinformation being fed to them by the media.

Paul Krugman wrote in Rolling Stone in 2014 that Obama was one of the most “successful presidents in American history.” Jim Nelson, the editor-in-chief of GQ magazine, wrote earlier this year that Obama will go down as one of the greatest presidents of all time. According to Nelson, “in the coming decades, Obama’s star will rise higher than Clinton’s, and he’ll replace Bill in the public mind as the Greatest Democrat since FDR.” Included in Nelson’s verdict of Obama’s legacy is his regret that Obama’s likeness won’t grace the side of Mount Rushmore, because we “won’t build Mount Rushmores anymore.” Journalist Jonathan Alter declared in January that history’s positive assessment of Obama was a foregone conclusion.

It’s not just pundits that are giving Obama the biggest benefit of the doubt in human history. Obama won the 2009 Nobel Peace Prize nine months into his first term. A poll of leading presidential “scholars” ranked Obama 15th best president less than a year and half into his presidency. Steven Gillon, Scholar-in-Residence at the History Channel and Professor of History at the University of Oklahoma, predicted in the Huffington Post back in March that Obama will be ranked “very high” on the scale of presidential greatness.

This presumption of greatness actually preceded Obama’s even taking office. New York Times bestselling author Frank Schaeffer declared just days after Obama was elected in 2008 that “he is going to be amongst the greatest of American presidents.” Weeks after his election, an elementary school on Long Island was renamed Barack Obama Elementary School, and the prime minister of Antigua proposed renaming the island nation’s highest mountain peak after Obama--which it ultimately was.

Today’s political left don’t just want Obama to be remembered as a great president, they need him to be. They have been emotionally invested in Obama since he was a candidate back in 2007. They are part of the coalition willing to go down with the ship they can’t (or won’t) admit has hit an iceberg and is sinking because everyone believed it was unsinkable. And this coalition includes influencers in pop culture, the media, and academia who are given captive audiences of the young and impressionable, and absolutely take advantage of it. To them, what Obama represents is more important than what he has actually done, and they will rewrite history on Obama’s behalf, canonizing a president who couldn’t be less deserving. What makes this worse is that, today, young people are taught to tolerate everything but differences in ideology. By the time kids get to college, they’re so afraid of ideas that don’t match what they’ve been brainwashed to believe that they actually need “safe spaces” to protect themselves from ideas different from their own. Bottom line: if we don’t teach them to challenge the narrative when they’re young, all hope might be lost.

I spent three and a half years researching and documenting the Obama presidency. What I found was a tangled web of scandals, corruption, unconstitutional acts, and abject failures of policy and leadership 200-strong and counting.

Will tomorrow’s students be taught about the Obama’s Administration’s incompetent response to the BP Oil spill? Probably not, even though that ineptitude was far worse than the federal government’s response to Hurricane Katrina. But, kids will surely be taught that Katrina was an epic failure of the Bush Administration, not the state and local officials who were actually in charge of the response.

While Richard Nixon is widely regarded as the most corrupt president in history, a look at the scandals that have plagued Obama’s administration make Nixon look like George Washington. From Fast and Furious, to the IRS scandal, from the Benghazi cover-up to his actively protecting former Secretary of State Hillary Clinton from criminal prosecution, Obama has a set a new bar for corruption in the White House. Despite the cancer of corruption in Obama’s administration, New York Times columnist David Brooks said the Obama years have been “been remarkably scandal-free.”

Obama also made an art form of giving ambassadorships to grossly unqualified individuals who were donors, sacrificing U.S. diplomacy for his personal and professional enrichment. When he wasn’t choosing unqualified donors for ambassadorships, he was picking the most radical people he could find for various positions in his administration. Obama had no qualms about picking people to serve in his administration who were anti-Semitic, convicted criminals, terrorist sympathizers, radical misandrist feminists, eugenicists, and supporters of convicted murderers.

His choices for those serving as his policy czars are also a reflection of his terrible judgment. John Holdren, Obama’s Science Czar (2009-present), supports forced abortions and sterilization to combat overpopulation. Vivek Kundra, Obama’s former Information Czar (2009-2011) was a convicted criminal. Rob Malley, Obama’s ISIS czar (2015-present) is a terrorist sympathizer. And then there is Kevin Jennings, who, as a history teacher, was told by one of his 15-year-old students that he was having sex with an older man. Jennings was legally required to report the statutory rape, but instead, actually encouraged his student to maintain the relationship. Jennings was appointed as, and served two years as, Obama’s Safe Schools Czar.

Let that sink in for a minute.

Aside from Fox News, no one else covered the story. Does anybody really believe that the history books will take Obama to task for such poor judgment? My Magic Eight Ball says Don’t count on it.

And then there’s Obamacare. Negotiated in secret and passed in haste without bipartisan support, it has become precisely the disaster critics predicted. From the day of its launch in 2013, the American people learned quickly they were sold a bill of goods - starting with the claims that the healthcare.gov exchanges would be secure (or even work). Instead of cheaper, better health insurance, they got higher premiums, higher deductibles, and less coverage. Obamacare health insurance co-ops have been failing, and even the left-wing fact-checking site Politifact called Obama’s promise “if you like your health care plan, you can keep it,” their Lie of the Year in 2013. Since Obamacare was passed, more people than ever are delaying medical care for financial reasons. But, don’t expect the history books to tell you that.

While Obama may pat himself on the back for his record on the economy, that’s nothing to brag about either. Record debt is now approaching $20 trillion--the direct result of the highest deficits in history. Economic growth is weak, we have an unsustainable debt-to-GDP ratio, poverty is up, food stamp usage has exploded, wages are lagging, and workforce participation is at historic lows. Will Obama be blamed for this? His allies in the media and academia will blame George W. Bush for his failures while claiming that, had it not been for his stimulus, things would have been much worse. That’s the same stimulus that was supposed to keep the unemployment rate below 8 percent—it reached 10 percent and the decline in the workforce participation rate is largely responsible for it going down since—and the economy has actually performed worse than his own administration's predictions for if there had been no stimulus at all.

And I haven’t even begun discussing foreign policy. Obama has proven himself to be a modern-day Nero. As the world burns to the ground, he plays golf and tells Americans that everything is getting better abroad while anyone paying the slightest attention knows otherwise. Between the failed Russian reset, the nuclear deal with Iran, the quagmire in Libya, and the destabilizing of the Middle East, nothing has gone right on Obama’s watch.  He can’t even keep the homeland safe.  Since the day he took office there have been at least ten successful terror attacks on U.S. soil.

All of this stuff… it’s just the tip of the iceberg. The question still remains, what will younger generations be taught about Obama’s presidency? George Orwell wrote in his dystopian novel 1984, “He who controls the past controls the future. He who controls the present controls the past.” We need to gain control of the present, because we can’t afford to have future generations believing Obama was actually a good president. If we don’t expose the truth now, then Obama will undoubtedly experience similar post-presidential legacy inflation as Franklin Delano Roosevelt and Bill Clinton.

So, before more schools are impetuously named after him, before monuments are built in his honor, or his likeness is put on our currency or the sides of mountains, we need to have an honest discussion about whether or not Barack Obama deserves such recognition. That’s why I wrote The Worst President in History: The Legacy of Barack Obama—because someone has to hold up the other side of that conversation.

I know my son will learn the facts to counter the fantasies about Obama’s presidency at home. But, most other kids will know only what they are taught in school or popular culture, and that’s what worries me. Obama never had to prove himself to earn accolades from those who saw him as a symbol of hope and change. When he repeatedly failed to deliver, rather than acknowledge their mistake, his supporters kept buoying him up, desperately trying to keep his legacy afloat, just so they can say they were a part of history. But what history were they a part of? The version they want to believe, or the truth? If we don’t get the truth out now, the history that is taught will be nothing more than a fairy tale.