Marvin Olasky
|
Posted: Sep 01, 2019 12:01 AM
Share   Tweet
The opinions expressed by columnists are their own and do not necessarily represent the views of Townhall.com. 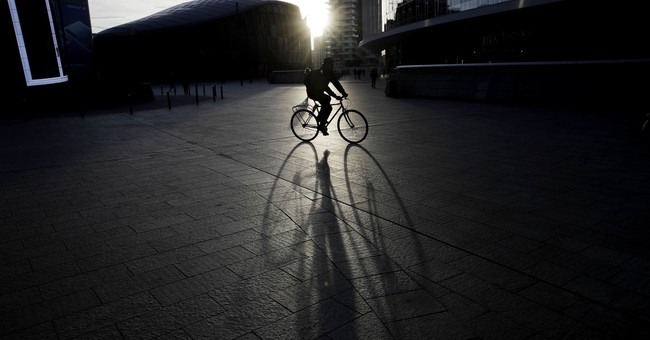 In 1968 CBS, facing political pressure, finally allowed on “The Smothers Brothers Comedy Hour” a song, “Waist Deep in the Big Muddy,” that implicitly called President Lyndon B. Johnson a “big fool” for leading America deeper into the Vietnam War. The song has a platoon fording a river that goes from knee deep to neck deep in the Big Muddy -- “and the big fool says to push on.”

Forty years later, in 2008, an 8-year-old in Adair Park in Atlanta’s Westside had a bicycle that needed new tires and tubes. Tim O’Mara, who owned a video production company, and his wife Becky, who worked at a local church, wanted to be good neighbors. They offered to fix the bike if the girl would do chores in their yard.

She worked so diligently that she ended up with a new bike -- and soon children throughout the neighborhood wanted the same. Before long children learning how to repair and assemble bicycles filled the O’Mara driveway on Saturdays. Five years later Tim and Becky had created a bike shop and gone all-in on a nonprofit that became WORLD’s Southeast Region Hope Award winner in 2013.

By itself that might look like a cute tale about a ministry, but the story of Bearings Bike Shop is more than that. During the past half-century American education has become one-dimensional: Every student is supposed to attend college, even though most students are not inclined to sit in a classroom and discuss abstractions.

Nationally, one-fourth of high-school freshmen now fail to graduate in four years. Half of students who start college drop out during or after their first year. Others hang around, often learning little but piling up debt. Meanwhile, the United States faces a skills gap. Young workers who gain the skills and self-discipline to become technicians and mechanics can readily move from poverty to the middle class. Nevertheless, many liberal politicians and their National Education Association funders are big fools who demand “college for all.”

Atlanta’s Westside is typical in that regard: Becky O’Mara says students without academic aptitude “are told that college is the path ... you feel like a failure.” Tim O’Mara has seen how accomplishments change self-perception: “When you give a kid a bike and you start building things for the first time, they’re like, I can’t do this. And then we do it piece by piece. They learn those pieces and then they build a whole bike and all of a sudden their confidence really takes off.”

I saw at Bearings the wall charts that show day by day whether students take care of their tools, show up on time, and display the other “soft skills” future employees will need. Using donated bikes of varying quality, kids who stick with the program also gain “hard skills,” becoming accomplished mechanics with skills transferable to other tasks. About 250 students participated in the program last year.

As students work, they listen to Christian rap and through that, along with spoken-word CDs, many encounter the gospel. Bearings has also seen tragedies. The little girl who earned the first bicycle has had numerous problems. One Bearings regular grew up with a single mom, a dad in jail, a sister who had her first child at age 14, and a younger brother killed this past March. Still, he’s now working with a small-business owner outfitting camper vans.

James Garfield, president in 1881 when American colleges were just starting to turn into German-style universities, defined an ideal college as theologian “Mark Hopkins on one end of a log and a student on the other.” We can improve American education for students with mechanical rather than academic aptitude: How about an O’Mara fixing one wheel of a bicycle and a student fixing the other?

Classical Christian schools have been a wonderful innovation of the past three decades. Christian mechanics schools and training programs are rare. If you know of a good nonprofit one, please nominate it for next year’s Hope Awards by writing to ckoh@wng.org. To read about this year’s regional winners, and to vote for the one that moves you the most, please go to wng.org/compassion.