Mark Davis
|
Posted: Oct 08, 2018 12:01 AM
Share   Tweet
The opinions expressed by columnists are their own and do not necessarily represent the views of Townhall.com. 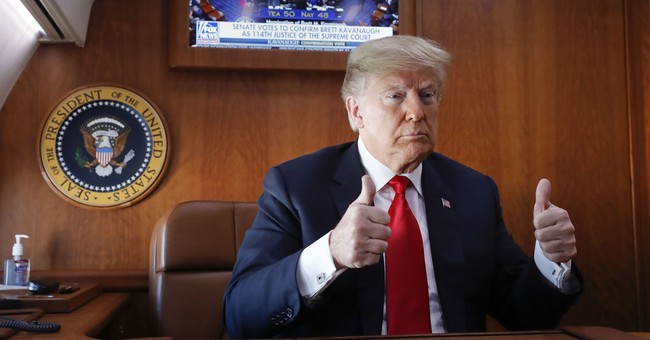 In a way, I still can’t believe it happened.  Brett Kavanaugh is a Supreme Court Justice.

Of course, I know it happened.  I saw it happen.  Through the worst of the smears against him, I held out moderate confidence that it would happen.  But as the 50-48 vote was announced, as his SUV motored toward his new workplace for his installation, as the photographs of that moment were released—I had a pinch-myself moment.  Did we just fend off the worst the left had to offer?  Did we just power this nomination to the finish line by standing up not just for the Constitution but also for basic human decency and fundamental rules of proper behavior?  Did President Trump and an energized Senate GOP just show America how to fight?

For too long, the frequent Republican reply to Democrat viciousness was “Thank you, sir, may I have another?”  As Justice Kavanaugh (how I love typing that) prepares for what should be decades of voting according to the law and not his whims, conservatives should pivot from celebration to serious reflection.  Will this be a one-off moment of joy?  Will we look back longingly on the autumn of 2018 as that singular chapter featuring the courage and conviction we had hungered for?  Or will it represent a wake-up call setting the stage for the battles to come?

It’s up to us.  Will we allow our relief over the Kavanaugh success to lull us into a satisfied stupor?  Or will we rise up with still-sharp memories of what the Democrat party did to this good man and his family, to Senate decorum and to the concepts that keep our society rational?

Our first gut check is right around the corner.  Democrats who participated in the attacks on Kavanaugh are up for re-election in several Trump states.  They must be shown the door back to private life in Florida, Indiana, Missouri, Montana and North Dakota, and dare we dream, Ohio, Michigan, Pennsylvania and Wisconsin.

In West Virginia, Joe Manchin distinguished (and maybe preserved) himself as the lone yes vote for Kavanaugh in the party that otherwise savaged him.  President Trump is surely grateful, but he should not dilute his vocal support for Republican challenger Patrick Morrisey.  It is impossible to know whether Manchin bucked his party in a reflection of his true sensibilities or as a desperate tactic for November survival. I don’t care.  We don’t need to spend the next six years wondering if he will give us similar cooperative moments.

No retreat.  No surrender.  There is only one reason Kavanaugh is on the high court and not dashed against the rocks of leftist slander:  we fought back.

Trump’s instincts and track record in that regard are not surprising.  But look who volunteered to march into the gaping maw of Democrat fury:

--Lindsey Graham, occasional fellow traveler in his friend John McCain’s wanderings from the conservative path, especially on immigration, where they both became famous for being dead wrong nearly all the time. Graham’s righteous anger from his Judiciary Committee seat is one of the great conservative moments in recent congressional history.

--Mitch McConnell, always capable, always measured but not unanimously admired by conservatives as he followed his instincts of deal-cutting and compromise in an era when both became an image negative. But can anyone recall a Republican Senate Majority leader so galvanizingly compelling the faithful to climb on his back to take that hill?

--Susan Collins, whose New England-style Swiss cheese conservatism has earned her electoral security in Maine but grumbles of frustration from the conservative base.  She didn’t go full Ted Cruz in her definitive speech announcing her intent to vote for Kavanaugh, assuring his success.  She employed her usual traits of nuance and even-handedness, but this time toward a bold moment that did not spare the Democrats and other Kavanaugh-haters the scolding they deserved.  For this, she was pilloried as having abandoned her moderate credentials for admission to the Trump agenda clubhouse.  One can only hope.

What we have witnessed has never been hard to describe but has apparently been monumentally difficult to do.  Republicans, from the President on down, have finally sprouted spines that do not collapse out of fear over what Democrats or media tormentors might say.  Confronted with hideous attacks that have withered past GOP majorities, this Trump-infused army drew a line in the sand and refused to budge.

The good news is that Republicans seem particularly energized, some even willing to sweep aside their NeverTrump neuroses and row along with the rest of us.   The challenging news is that this kind of resolve must be rekindled again and again and again.  If majorities in both houses of Congress can be preserved in November, those Republican members installed in January had better be ready to take the next hill, and the next and the next.  Do you think liberalism made its deep inroads with intermittent passion?  I have long opposed the ideology of the left while admiring and envying its tireless devotion.

It can be our turn if we are up to the task.   Let us bring Kavanaugh confirmation-style courage and energy to our fights for stronger borders, health care reform and fiscal sanity.  Maybe a uniquely brave wing of the GOP can even prod the President on spending cuts.

We fought for Brett Kavanaugh not simply to win him a Supreme Court seat, or just to bolster the Constitution.  This fight was necessary to deal a blow to the darkest of tactics and those who would deploy them.

They will not stop.  They will not slink away. They are not defeated.  Every elected official who rose to this great occasion and every voter inspired by it must prepare to draw from this well repeatedly.  Brett Kavanaugh could well sit on the Supreme Court for thirty years.  If we rest on the current laurels, the left can regain the upper hand in a matter of months.