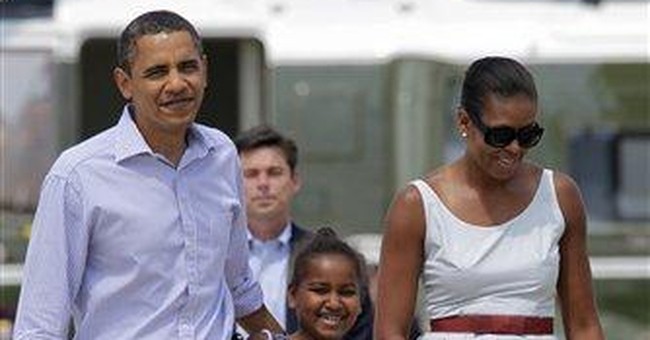 The Travel Channel had an “extreme” marathon this weekend – Extreme Waterparks, Extreme Terror Rides, Extreme Restaurants, etc. In the Extreme Towns episode, there was a segment on the town of Metropolis, Illionois, featuring a picture of Barack Obama standing in the Superman pose in front of the town’s 15-foot tall, 2-ton bronze Superman statue. The image reminded me of the superhero status the President had enjoyed as recently as eight months ago and it made me think about the kryptonite that brought him down to earth.

Is it true that, as Obama’s supporters claim, “special interests with a stake in the status quo” have acted as the kryptonite that has weakened the once seemingly invincible Obama? Or are the American people, organized into “angry mobs” across the country, responsible for his fall to earth?

The kryptonite that has caused Obama’s approval numbers to drop 20 points since his inauguration is not a group of people or powerful interests. Truth has been Obama’s kryptonite – truth and reality. The reality of President Obama’s actions has not lived up to the “hope” candidate Super Obama sold to voters. Candidate Super Obama made many promises pertaining to transparency. On his transition website he promised "a new level of transparency, accountability and participation for America's citizens." The reality of his presidency has fallen far short of those promises.

Candidate Super Obama told voters when he was president, “the days of [corporate lobbyists] setting the agenda in Washington” would be over because “they won't find a job in my White House.” In reality, by the end of January Obama had already named over a dozen recent lobbyists to staff positions in the White House.

Candidate Super Obama said as president he would put any bill that crossed his desk online for five days so that voters could review it before he signed it. In reality, that promise has been broken by President Obama more than once, most notably when the record breaking “stimulus” bill was rushed through the congress before there was even time for those voting on it to read it, only to have it sit over the weekend before President Obama signed it. And that was not the only promise broken with passage of the stimulus bill.

In February, when Super Obama was still enjoying high public approval, he bragged about passing a recovery plan free of earmarks, but shortly thereafter signed what he called an "imperfect" spending bill that included more than 8,500 earmarks. Also by February, he had already broken his promise to not raise taxes on anyone who makes less than $250,000. The reality of the Obama administration became even clearer during the health care debate.

In a town hall meeting on August 21, 2008 in Chester, Virginia, regarding how he would bring about health care reform, Candidate Super Obama said: “I'm going to have all the negotiations around a big table… we'll have the negotiations televised on C-SPAN, so that people can see who is making arguments on behalf of their constituents, and who are making arguments on behalf of the drug companies or the insurance companies. And so, that approach, I think is what is going to allow people to stay involved in this process.”

At a debate on January 31, 2008 he said, "That's what I will do in bringing all parties together, not negotiating behind closed doors, but bringing all parties together, and broadcasting those negotiations on C-SPAN so that the American people can see what the choices are, because part of what we have to do is enlist the American people in this process.”

Earlier this month the reality of how President Obama was handling the debate over health care and the economy was much different than those promises of allowing people to stay involved and enlisting the American people in the process. At a fundraiser in early August Mark Knoller reports President Obama said, "I don't want the folks who created the mess to do a lot of talking. I want them to just get out of the way so we can clean up the mess!" In March, Mark Tapscott wrote, “As people focused more on the details and how they didn't square with what they thought he had promised during the campaign, the soaring rhetoric lost much of its power. It may even now be approaching a net negative because it throws so much more light on the inadequacies of the policies.”

“And so the ground has shifted and the essential narrative is changing…the mask is off and the disconnect between rhetoric and reality is emerging as the dominant driver of the Obama narrative. The contrast is no longer between the young, personable, historic candidate Obama and a creaky, cranky old Republican White Guy, it's between what America thought it was getting in a President Obama (cool, reasonable and beyond partisanship) and what it now sees as the reality of a President Obama (government spending out of control, an uncertain hand on foreign policy, broken promises, more bureaucrats, etc. etc.).” There is even more evidence today of what Tapscott called the “disconnect between rhetoric and reality” and it continues to grow. In addition to those listed above, a couple of recent “realities” of President Obama’s administration include weaker than promised job creation resulting from the stimulus bill, and last week’s announcement the 10 year federal budget deficit projection is now at 9 trillion dollars.

The only way President Obama is going to regain his superhero status is to distance himself as far away as possible from the reality of his administration’s actions. Until he is able to do that, his effectiveness will continue to weaken as surely as Superman in the presence of kryptonite.