Track Record Shows McCain is Most Fit to Lead 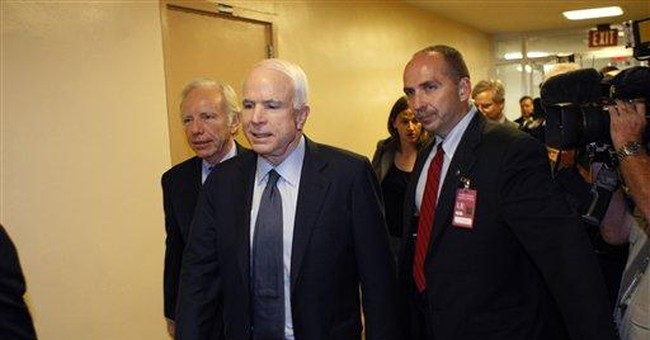 Democrats are fond of accusing Republicans of avoiding a discussion of the issues. Most recently this accusation was made regarding John McCain’s request that Friday night’s foreign policy debate be postponed so that all attention could be put on the current financial crisis and bailout plan. If I were John McCain there are quite a few issues that I would be eager to discuss, and some facts I would want to repeat over and over again until even those in the mainstream media would have trouble ignoring them. Here are a couple of the issues I would discuss as frequently as possible.

John McCain’s warning of the current financial crisis. The specifics of how we got where we are today are not simple enough to put in a 30 second television ad or on a bumper sticker, but the general concept is. The roles John McCain, Barack Obama and congressional Democrats played in the current crisis are pretty darn easy to break down so that even those like me who are challenged when it comes to understanding finance and world markets can understand it. In May 2005, John McCain identified the problems at Fannie Mae and Freddie Mac saying, “For years I have been concerned about the regulatory structure that governs Fannie Mae and Freddie Mac – known as Government-sponsored entities or GSEs – and the sheer magnitude of these companies and the role they play in the housing market.”

McCain went beyond voicing his concerns and took action: “I join as a cosponsor of the Federal Housing Enterprise Regulatory Reform Act of 2005, S. 190, to underscore my support for quick passage of GSE regulatory reform.” He warned of the consequences of not acting: “If Congress does not act, American taxpayers will continue to be exposed to the enormous risk that Fannie Mae and Freddie Mac pose to the housing market, the overall financial system, and the economy as a whole.”

He identified the problem and co-sponsored legislation that might have prevented the current crisis. Congressional Democrats blocked that legislation. Senator Barack Obama didn’t weigh in on the matter.

Today Democrats want the American public to trust them to clean up the financial mess and to steer the economy for the next four years. If Americans were fully informed of the track records of Democrats and Republicans on this issue, as well as the more specific records of McCain and Obama, I think all but the fiercely partisan would see that Republicans have more credibility on this matter. If I were John McCain I would have every spokesperson for the campaign remind voters about my warning and proposed legislation that was blocked by Democrats every time they spoke to the media.

John McCain’s support for the Surge. Another issue that I would discuss at every opportunity is McCain’s support for the Surge strategy in Iraq. This is another one of those issues that is pretty easy to break down for voters. Whether or not you think the decision to invade Iraq was a good one, John McCain’s position on how the war was waged is worth repeating as frequently as possible. John McCain saw a problem with the way the war was being fought. He called for a change in strategy and for more troops to be deployed to the region. When the Surge strategy was put together and presented by General Petraeus, John McCain fought for it in the Senate. Barack Obama opposed it. Obama and congressional Democrats declared the war virtually un-winnable, or in some cases, already lost. Barack Obama said of the Surge, “I am not persuaded that 20,000 additional troops in Iraq is going to solve the sectarian violence there, in fact I think it will do the reverse.”

Even after the Surge strategy was obviously producing results in Iraq, Barack Obama declared it a failure. After the progress in Iraq was sustained for an extended period of time and became impossible to deny, Obama reluctantly acknowledged it, saying in an interview with Fox’s Bill O’Reilly that it had succeeded “beyond our wildest dreams.” In that same interview, however, he refused to admit he was wrong to have opposed the surge. As with the Freddie/Fannie mess, John McCain identified problems with the war in Iraq and took action to correct them. Barack Obama was wrong about the Surge. If he had been President we would have surrendered to defeat in Iraq two years ago. John McCain easily has more credibility than Barack Obama on the question of who would make a better commander-in-chief.

Fitness to lead. The two examples cited here are the basis for a strong argument that John McCain is more fit than Barack Obama to lead this country in a time of war and in time of financial crisis. There are many other examples in the backgrounds of McCain and Obama that provide evidence of which man is more qualified to lead, but I see these two as some of the strongest and if I were in the McCain campaign I would find every opportunity possible to remind voters of them.