Lawrence Peck
|
Posted: Jul 13, 2021 9:30 AM
Share   Tweet
The opinions expressed by columnists are their own and do not necessarily represent the views of Townhall.com. 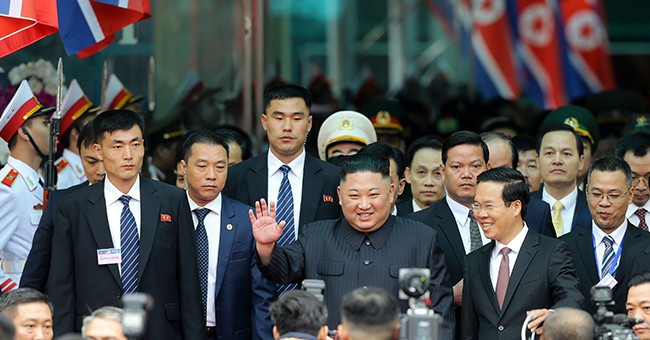 As bizarre, inexplicable, and deeply troubling as it may seem to decent Americans, including even perhaps the rapidly declining number of genuine, old-fashioned liberals, there exists in the U.S. today a pro-North Korean movement. It is an extremely well-organized, well-funded, and increasingly influential network of interlocking, closely collaborating organizations and activists with somewhat overlapping leadership personnel and key supporters.

Most Americans, even some well-known Korea experts, unfortunately including a few who happen to be conservatives, are not aware that there exists such a pro-North movement here.

They sometimes wrongly view it as merely a few isolated, uncoordinated, fringe individuals engaged in activities lacking any substantial impact. Even some of those who are aware of basic outlines of the pro-North movement here nevertheless remain unfamiliar with its reach and basic nature. They erroneously dismiss it as insignificant, and therefore fail to actively expose and oppose it.

Pro-North groups, these days in coordination with groups supportive of South Korea's leftist leader Moon Jae-in and his ruling Democratic Party of Korea, have been greatly enhancing their lobbying activities targeting the U.S. Congress, the Biden administration, the media, and the general public. This has serious national security implications, because some of those engaged in such lobbying, through meetings with members of Congress and Senators, are individuals who have been communicating and collaborating for years with North Korean intelligence agents. These pro-North groups and activists support the North Korean regime, defend it from serious criticism, libel its critics, and downplay or outright deny its repressive nature and crimes against humanity.

There are six essential points to keep in mind regarding the pro-North movement in the U.S.

First, there are different categories of pro-North groups and of the people associated with such groups. There are openly and hardcore pro-North groups and there are pro-North "front groups." The "fronts" are often more dangerous than the openly pro-North groups because although both types share very similar pro-North views, and in some cases even have overlapping staff at the top leadership levels, the "fronts" operate in a different way and target a different and much wider audience. They deny they are truly pro-North and instead deceptively claim that they are merely for "peace" and "unification" of the South and North. They are in many respects similar to the pro-Soviet “front groups” in the U.S. during the 1930s.

Second, there are many individuals who are ordinary members of pro-North groups, particularly "fronts" or who assist such groups, but who may not personally support the North Korean dictatorship. Such people are what we typically term "useful idiots" or "dupes." Others provide important assistance to pro-North "fronts:" These are "enablers" of the pro-North movement, who do not fit neatly into the pro-North category, but who do not realize the harm they do in aiding pro-North groups.

Third, pro-North activists differ from other American citizens who engage in lobbying, pursuant to their Constitutional right to express their views to their representatives, because some of these pro-North activists collaborate with North Korean intelligence agents who are based at the North's U.N. mission in New York City. Other pro-North activists have not merely praised the North but have urged and praised violence against their fellow Americans and the U.S. as a nation. Not only hardcore groups but also some of the "fronts" routinely vilify America in the harshest language, and some have engaged in anti-Christian and especially vitriolic anti-Semitic rhetoric. Pro-North activists are certainly radical leftists, but they are more extreme in their views than many others on the left.

Fourth, in recent years, the distinction which I have noted between, on the one hand, the openly, hardcore pro-North groups, and on the other hand, the pro-North "front groups," has become blurred. These different types of groups have increasingly been willing to collaborate with one other, sometimes openly.

Fifth, whereas pro-North groups and activists have for years been relatively isolated from mainstream society and operated on the fringes of the Korean-American community and American political life, that has been dramatically changing with the coming to power of South

Korea's leftist leader Moon Jae-in. This is because pro-North and pro-Moon groups are now increasingly collaborating such as lobbying against sanctions on the North and in favor of a so-called no-preconditions "peace agreement" with the North. This is a new and extremely disturbing development, because it has empowered the pro-North groups by providing them with a certain "legitimacy" and respectability in the eyes of some Korean-Americans and Korea experts. The Moon government is aiding and promoting pro-North forces here as part of a "united front" effort.

Sixth, the members and supporters of U.S. pro-North groups are a diverse lot, except, of course, in the realm of ideology, where those at the leadership levels of both "fronts" and the openly, hardcore pro-North groups hold many of the same views. Their diversity lies in their various occupations and ethnic backgrounds. The pro-North movement includes Marxist-Leninists of Korean and non-Korean ethnicity; Korean-American extreme ethno-nationalists, a significant number of whom are anti-Semites; adherents of the North's state ideology of Juche; haters of America and their fellow Americans; and worshippers of the Kim dynasty cult. They include professors, street radicals, writers, surgeons, lawyers, young students, scientists, small-business people, and astonishingly, even Christian clergy.

Some of the legislators whom they have been targeting, and from whom they have received sympathetic hearings and even outright support, include members of Congress such as Ro Khanna, Alexandria Ocasio-Cortez, Rashida Tlaib, Barbara Lee, and Senator Bernie Sanders. These legislators either do not know or simply do not care that in some cases they are meeting with activists who have been collaborating with North Korean intelligence agents.

Although a few pro-North activists in the U.S. have been convicted of serving as agents of the North, and others may be in violation of the law by failing to register as foreign agents, I believe that the most effective means of opposing these extremists and frustrating their plans is by publicly exposing and shaming them for their pro-North positions, anti-American rhetoric, and far-left fanaticism more generally. The key is to isolate them from mainstream circles and serious policy discourse, which may be accomplished by simply quoting their own extremist words, noting their bigotry and anti-Semitism, and demanding that they disclose their ties to the North Korean regime. By such means, decent but misguided Americans will cease being deceived by them, and their influence will be reduced. The first step in accomplishing this is to educate our fellow citizens as to the existence and true nature of these forces.

Lawrence Peck holds a B.A. degree in Political Science from U.C.L.A. and a J.D. degree from Loyola Law School.  He serves as an advisor to the North Korea Freedom Coalition.  He lived and worked in South Korea for almost six years as a consultant to major Korean business groups. He is proud of the fact that pro-North Korean groups and activists have stated that his work is a threat to their movement.