Will McCain Make the Investor Connection? 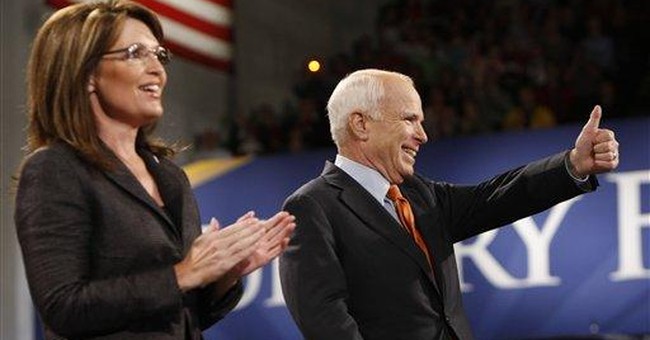 While the presidential candidates were debating in Nashville on Tuesday night, the Asian stock markets were selling off by 10 percent. Earlier in the day, the U.S. market plunged by 500 points. These were big-time drops, yet presidential debaters never talk about the stock market. Nashville was no exception.

Roughly $2 trillion in U.S. shareholder capital has been lost in the past 15 months. Stocks are down 20 percent over the last month alone. Those are nasty hits. Stock market people are very unhappy campers right now. And the bad-news financial statements for September are now either in the mail or on the kitchen table. But there were no references to investors either by John McCain or Barack Obama on Tuesday night. This is nuts.

The investor class is a huge voting bloc. Shareholders in recent national elections represented nearly two out of every three votes cast. And most surveys put the investor-class population at slightly over 100 million. This includes direct investment through brokerage accounts, although the vast majority of investor-class members own IRAs, 401(k)s and defined-benefit plans, such as state and city pension funds.

So why aren't the presidential contenders trying to connect to investors? More glaringly, why isn't McCain?

After the debate, I checked in with TechnoMetrica's Raghavan Mayur, who puts out the respected IBD/TIPP poll. Mayur consistently ranks among the top pollsters in terms of accuracy, including his work on investor preferences. For September, Mayur's data show McCain with a small 45-41 lead over Obama among investors. That's roughly within the poll's margin of error, and for McCain it isn't enough.

Four years ago this September, George W. Bush had a 10-point lead over John Kerry among investors. In November, Bush won investors by a 53-42 margin. By this measure, McCain is now way behind. And I suspect it may be a function of his reluctance to talk directly about investor taxes -- especially on capital gains and dividends.

The Bush tax cuts in this area were very popular among shareholders since they reduced the cost of capital and raised after-tax investment returns. Of course, McCain has pledged to maintain President Bush's investor tax cuts at the current 15 percent rate, while Obama proposes to raise them to at least 20 percent. But McCain seldom talks specifically about cap-gains and dividends, and the polling numbers strongly suggest he's not connecting with investors.

Obama constantly bashes businesses and successful high-end earners, and one would think investors would be totally turned off by this. But Mayer's polls don't confirm it. Why? Perhaps investors sense a lack of tax-cutting passion from Sen. McCain.

For example, during the debate, McCain did mention how he and Obama differ on tax policy. At one point, McCain even compared Obama to Herbert Hoover. "My friends," he said, "the last president to raise taxes during tough economic times was Herbert Hoover, and he practiced protectionism, as well."

McCain later said: "I've got some news, Sen. Obama -- the news is bad. So let's not raise anybody's taxes."

But McCain never got specific on capital gains and dividends, and he failed to educate voters on just how important investment is to healthy job-creating businesses.

Ditto for McCain's proposed corporate tax cut. The senator wants to slash the business tax rate from 35 percent to 25 percent. It's an excellent plan. But McCain doesn't explain how two-thirds of the benefits of a corporate tax cut go to the workforce through higher wages, with the rest then going to shareholders. He also doesn't point out that ordinary folks actually pay the corporate tax, since firms pass this tax cost along in the form of higher prices. So McCain could, in fact, call a corporate tax cut a consumer tax cut. But he's not doing this.

McCain also needs to put investors on red alert about Obama's middle-class tax cut. The Illinois senator's huge government-spending plans will overwhelm his ability to cut taxes for 95 percent of the people. In fact, McCain needs to remind voters that Bill Clinton made exactly the same promise as a candidate in 1992 before he broke it as president in 1993.

Time's running out. The investor class vote -- which still looks up for grabs -- has simply got to be a McCain priority if he is to win in November. Rag Mayur doesn't have his October polling results in yet, but he thinks the race will be much tighter than mainstream pundits believe. Message to Sen. McCain: The investor vote could well tip the balance.