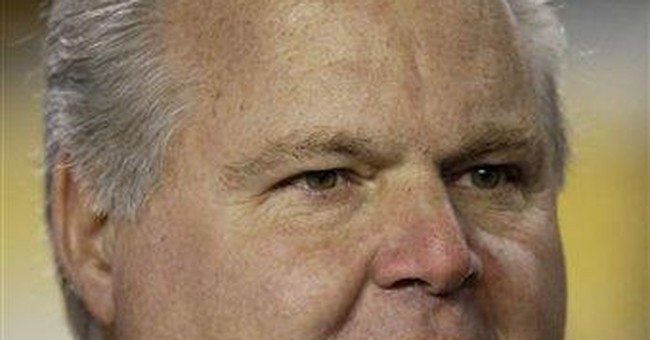 We've now established that Rush Limbaugh cannot own an NFL team given his "unacceptable" (read: conservative) political comments. What about sports figures, executives and commentators who offer their left-leaning political thoughts?

Many of us turn to the sports pages before the news section. For just a moment, we can put aside worries about the economy, Iraq, Afghanistan, ObamaCare, the "peril" of "global warming," government bailouts and the feds' borrowing and spending.

In sports, we want to read or hear about who ran the fastest, scored the most points, defeated the opponent. In sports, there is an oasis -- until anti-GOP, anti-Bush, anti-conservative comments slap us.

National Basketball Association Commissioner David Stern was asked whether Kobe Bryant should continue to play while being prosecuted for rape. Stern responded: "Absolutely. We don't have a Patriot Act in the NBA. That means that you're innocent until proven guilty." What does the Patriot Act --passed to fight terrorism -- have to do with the presumption of innocence or guilt?

New York Times sports writer Harvey Araton, in an article about friction between two U.S. Olympic speedskaters, wrote, "At the root of the conflict is (one skater's) belief that (the other skater) has been attempting to swift boat him." You see, "Swift boating," to many liberals, has now become a synonym for "lying." Never mind that the real "Swift boaters" were ex-military men raising legitimate points about the military record of former Democratic presidential candidate John Kerry.

Bryant Gumbel, on his HBO "Real Sports" program, said that he wouldn't watch the Winter Olympics. Gumbel said, "Try not to laugh when someone says these are the world's greatest athletes, despite a paucity of blacks that makes the Winter Games look like a GOP convention." Gumbel, too, finds soccer boring because he knows "that in soccer they score about as often as Ann Coulter makes sense."

When then-Gov. and GOP vice presidential candidate Sarah Palin attended a hockey game in Philadelphia, The New York Times posted a story from a hockey blogger, who wrote, "Palin ... was greeted by resounding (almost deafening) boos from the Flyers crowd." Really? The Associated Press wrote: "The Alaska governor and self-described 'hockey mom' heard a few boos when she walked onto the ice, but that soon turned to polite applause. ... Palin waved to the crowd and smiled as she dropped the puck to applause and cheers." (Maybe Palin attended two different games.) At least the Times quickly pulled down and replaced its post with a more accurate version.

Maxim magazine asked NBA basketball superstar LeBron James, "If there was one guy on the planet you could dunk on, who would it be?" James responded: "If it doesn't have to be a basketball player, George W. Bush. I would dunk on his ass, break the rim, and shatter the glass." Bush's sport was baseball. Wouldn't former prep-school baller President Barack Obama present a bigger challenge?

Popular television sports analyst and former NBA star Charles Barkley said, "I was a Republican until they lost their minds." He also offered that only two presidents in his lifetime -- Clinton and Carter -- had ever done anything for black people.

Nation magazine's sports editor, Dave Zirin, condemned Limbaugh's interest in purchasing an NFL team as "having somebody in an NFL owner's box who (players) know views them with naked and open contempt because of the color of their skin."

John Salley, former NBA player and co-host of Fox Sports' "Best Damn Sports Show Period," said in an appearance on a podcast: "I have a question: Do you hate Obama? Why are so many people -- who now hate him -- after just 266 days they loved him? (sic) All of white America. Not all of 'em but the majority." So, opposition to policies equals "hate."

New York Times sports columnist Selena Roberts, when it became increasingly clear that Duke lacrosse players were innocent of rape, channeled her inner Dan my-facts-are-wrong-but-my-point's-valid Rather: "What happens if all the charges are dismissed? There is ... the irrefutable culture of misogyny, racial animus and athlete entitlement that went unrestrained that night." Hey, they were falsely accused, but, well, let's examine the big picture.