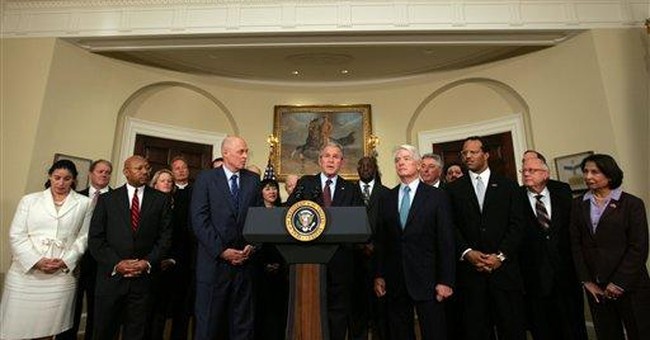 Walter Cronkite, when asked whether he agreed that liberals dominated the major news media, told me, "Yes -- if by liberal you mean open-minded."

Are liberals more "open-minded" than conservatives?

To find out, a biennial survey conducted by the University of Michigan's American National Election Studies uses a scale from 0 to 100 -- 0 meaning shoot-the-person-on-sight hatred, and 100 meaning find-a-place-for-him-on-Mount-Rushmore adoration. The 2004 survey then asked 1,200 adults to define themselves politically.

Using this 0-to-100 scale, the survey asked those who described themselves as "conservative" or "extremely conservative" to rate "liberals." Average score -- 39. "Liberals" and "extreme liberals" gave "conservatives" a similar score -- 38.

But the survey then asked respondents to apply the scale to specific people. How did "extreme conservatives," in 1998, rate then-President Bill Clinton and Vice President Al Gore? "Extreme conservatives" gave them both an average reading of 45. Twenty-eight percent gave Clinton a 0, with 10 percent giving that score to Gore.

After Republicans took control of the House in the mid-'90s, Rep. John Dingell, D-Mich., compared the newly conservative-controlled House to "the Duma and the Reichstag." Dingell referred to the legislature set up by Czar Nicholas II of Russia and the parliament of the German Weimar Republic that brought Hitler to power.

Comparing Republicans to Nazis remains a favorite pastime of some Democrats. Billionaire Democratic contributor George Soros said the Bush White House displays the "supremacist ideology of Nazi Germany," and that the administration uses rhetoric that echoes his childhood in occupied Hungary. "When I hear Bush say, 'You're either with us or against us,'" Soros said, "it reminds me of the Germans."

Democratic National Committee Chairman Howard Dean characterized the contest between Democrats and Republicans as "a struggle of good and evil. And we're the good."

Last week at my local barbershop, the barber working at the chair next to mine, and his customer, discovered that I voted for George W. Bush. Shocked! Shocked! The customer stammered, "Why?"

Not particularly interested in a political discussion, I said something about keeping the country safe, opposition to big government, and support for low taxes.

"But how, how can you support somebody who pulled off 9/11?"

"You mean Bush murdered 3,000 people on American soil?" I asked.

"He did it to get black people."

"Explain to me why people like Bush and Cheney run for public office in order to commit murder."

"Because that's what they do."

"For what reason? To get rich?" I asked. "They already were."

I then learned that somebody intentionally ruptured a levee in New Orleans during Hurricane Katrina; that Bush simply serves as a puppet for others; and that "they" wish to "destroy" the little people in the middle class.

Finally, I sighed and simply asked, "How do you function day by day?"

"How do you get up in the morning thinking that somebody in Washington, D.C., wants to murder you?"

I started to ask him where he places Bush on that thermometer, but I think I already knew. So I switched the conversation to the NFL playoffs.