Kurt Schlichter
|
Posted: Jan 20, 2021 12:01 AM
Share   Tweet
The opinions expressed by columnists are their own and do not necessarily represent the views of Townhall.com. 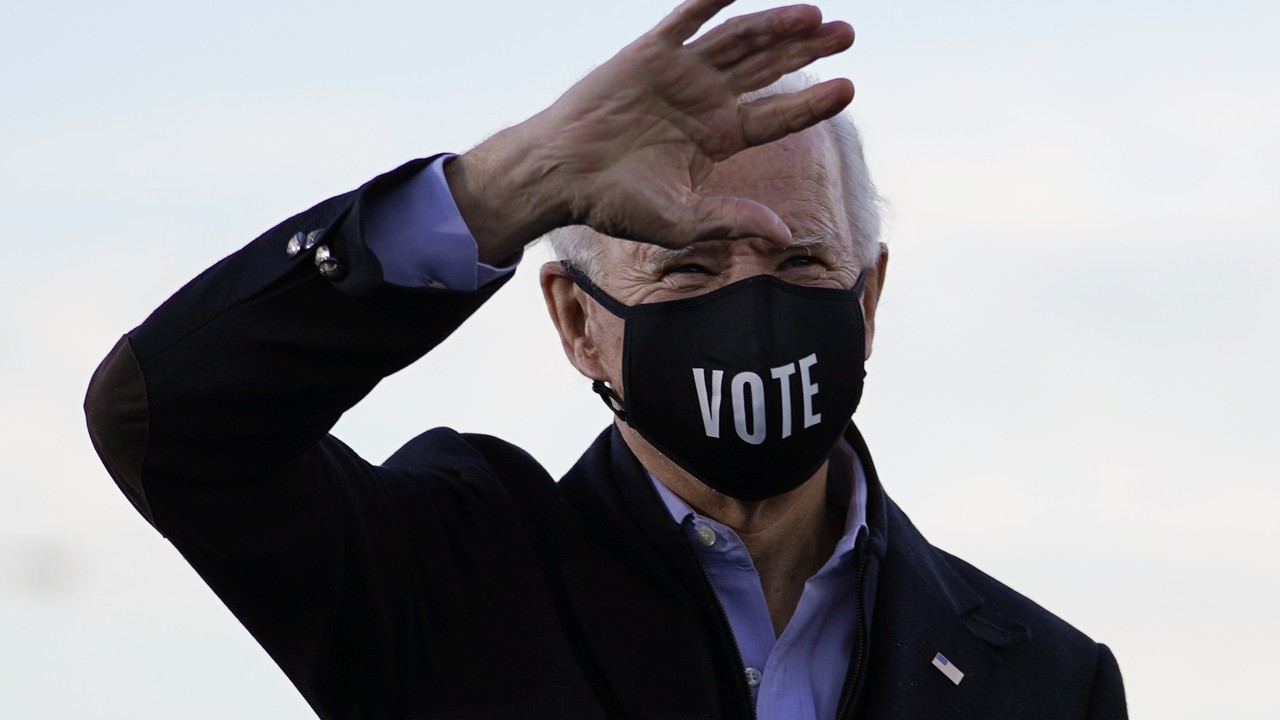 I hear a rumor that some event is going to happen today. Apparently, there is a weird ritual when a few scattered people show up and lurk behind walls – walls apparently work again – in order to install a zombie as king. Hope they have fun, because they look like idiots.

At least we get the answer to the age-old question, “What if they gave an inauguration and nobody came, except a bunch of mobilized Guardsmen ordered to be there?”

I’m not sure this plan to show three divisions of troops guarding the Capitol is giving off the impression that the Establishment geniuses wanted to present. It’s supposed to portray two things: 1) Those evil Trump voters may don their horn hats and attack because they are violent monsters of violence and we need the 150% of the number of division equivalents as stormed Omaha Beach to defeat this threatening threat, and 2) looky at all these troops we have at our disposal to crush your puny attempts to have your voices heard. Be afraid! BE VERY AFRAID!

Well, I’m unsure fear is the response that gaggle on Capitol Hill inspired.

Now, nothing will happen during this kabuki inauguration. Despite the evidence Bidenmania sweepin’ the country, no one will show. And the Establishment will announce that their performance art deployment was a great success in warding off the peril of wanna-be Vikings.

As for terrifying the masses at this potent show of military might, well, it might appear mightier if so many of the troops didn’t look like members of the Vindman Brigade. After a few days, I noticed that the Pillsbury Doughboys and Girls we not longer at the forefront of the force where the media could film them – they found the STRAC dudes and got them into the cameras’ view. Well, there was a lot of talk on the retired leaders’ network about how so many of the troops looked out of shape and, undisciplined. But hey – I’m sure they all got their transsexual awareness training completed.

That mess in the Capitol, with bodies strewn everywhere and weapons all over the place, was a disgrace. It never should have happened in a military organization, where discipline is key. But the objective here was not a military one but an information one. The Establishment wanted to send a message, and thought showing troops gaggled on marble floors was a great message. But it was garbled – the freak out about “insider threats” cast doubt on the troops’ willingness to pillage the proles at the behest of Pelosi.

What it told us vet leaders is these were undisciplined, badly led troops exploited by their garbage civilian leadership. And there was a big building with five sides just across the river full of generals and command sergeant majors but, to my knowledge, not one of them saw this mess on CNN (which they watch like hawks for anything about the military) and ordered up their driver to head over there and unscrew that fiasco.

The Chinese are laughing so hard right now…

I Have Questions The Garbage Media Refuses To Answer

So, the insurrections/coup/apocalypse was the worstest thing ever was, according to our brave media betters, and yet – call me suspicious – I am having some trouble with the premise that “five people died.” Now, I would hate to be accused of being nitpicky, but this “five people died” trope gets tossed around a lot and I have yet to see some, you know, evidence of causation that “five people died” because of…what? That’s another thing? What is the specific accusation? I know who the accused are – everyone who voted for Trump. And what is the evidence?

The purpose of the “five people died” trope is to shame Trump, and by extension you, for not accepting the garbage election results. And it gets used all the time, without question, so let’s violate the New Rules and question the official narrative that us Trump people killed five folks, shall we?

Right now, the only death we know for sure that was attributable to the Capitol Hill riot was the unarmed vet Ashli Babbit who the cop shot on video. The facts tell us she was a Trump supporter, though her personal ideas seem extreme and bizarre and, to the extent she was committing a crime, she is responsible for her own actions. But her death is being attributed to Trump supporters by bad faith media and others, so we need to examine the exact circumstances. Now, the investigation is underway and – again, because I’m a wacky rebel – I’ll await the full story before I judge the officer who capped the unarmed woman. But if it was a bad shoot, then it seems dishonest to present her death as the fault of the Trump people. Likewise, even if it is a justifiable shooting – and I will steadfastly refuse to take a position until I see all the evidence, because I believe in due process – then her actions, not those of Trump supporters, led to it. Regardless, it’s hard to see how that shooting could ever be fairly or honestly hung around the necks of the fans of the Bad Orange Man.

Three other people died at the event, but we have no info on how they passed away except it appears all suffered medical conditions. That is important – how do you attribute a medical event to the mini-riot? I could imagine how it might happen, but before you tar 74 million citizens with it you might want to have some specifics.

I’m curious – but our brave media is mos def not curious – about the specifics. Who were these three people? How did they die? Where and when did they die? Did they die of routine heart attacks or the like? Did they have preexisting conditions? People do die, you know. It’s not unfair when, accused of causing a death, that one demand some clarity on the theory of causation. If the theory is that you are responsible for anyone who dies for any reason in the geographic region in which you asserted your right to assemble to protest, I suggest the BLM/Antifa jerks lawyer up the next time a Republican controls the DoJ.

So, charitably, the three mystery passings cannot be fairly attributed to us based on what information is out there.

As for Officer Brian Sicknick, the Capitol policeman and a demonstrated patriot/vet who died soon after the mini-riot, we have no autopsy report and no specific cause of death yet. The family has stated he died from injuries sustained on duty, which if accurate would seem to exclude medical conditions. This is all we know right now. If the implication that someone hurt him is correct, that is shameful. But lawyering for decades has taught me you need to gather all the evidence, dispassionately, before you can be sure of the facts. We need to know the truth, at a minimum to hold anyone who committed a crime accountable, including any misguided individual who might share some of our very general views. No significant number of the 74 million who voted for Trump got in it to hurt cops.

I counsel prudence and a rigorous search for truth, wherever it leads, but the lack of hard facts has not stopped the left and their lackies laying his death at our feet. We hear rumors of Officer Sicknick being hit with a fire extinguisher, and there is video of some idiot hurling one at the cops, but the lack of hard facts raises questions. It’s been a while – if there were facts that showed he was murdered rather than passed away from another cause, you would expect them to come out. It does not mean they don’t exist. It just means that for the first time in memory a story that the bad faith media could spin against Trump was kept, properly, confidential until the investigation was complete.

It is unclear whether Officer Sicknick was the officer struck in that fire extinguisher video, and it appears from the sketchy facts that he collapsed at some point after the fracas. We still don’t know what happened. Was it a traumatic brain injury? Did he have a preexisting condition? All we have is a general statement. Right now, we really do not know what happened. Causation is still a thing even if the media and the pols want to skip over it.

And no, we don’t trust the people wagging their fingers at us. They are lying garbage. Neither the government nor the media deserve the benefit of the doubt, and both are slobbering at the opportunity to attribute his death to the rioters, and by extension, to us. You saw their game where another officer killed himself days after the riots, and some eagerly lumped that tragedy into the riot’s toll.

It’s certainly possible Officer Sicknick was killed by a rioter – and if someone hit him on the head, that’s a crime deserving punishment. It may be inconvenient for the Establishment’s Department of Narrative Maintenance, but we demand the facts. The bottom line is there is not enough public information at this time to fairly attribute Officer Sicknick’s tragic death to the chaos on Capitol Hill. It is absolutely unfair, regardless, to blame it on us. I wasn’t there. You weren’t there. None of us own Viking hats.

So, don’t use the “five dead” trope, and don’t let others do it unchallenged until they present some actual evidence.

Start the new year right with my newest novel Crisis, as well as my other four novels of America splitting into red and blue, People's Republic, Indian Country, Wildfire, and Collapse!

Afghanistan and the Collapse of Normals’ Faith in the System
Townhall
Canadian journalist claims gun violence happens because "in most States, you can buy a gun like you can buy a bag of chips"
Twitchy
Report: Surprising Private Message Trump Sent to Merrick Garland After Mar-a-Lago Raid Revealed
Redstate
Yes, They're Going to Arrest Donald Trump. Deal With It.
PJ Media