Kurt Schlichter
|
Posted: Sep 23, 2019 12:01 AM
Share   Tweet
The opinions expressed by columnists are their own and do not necessarily represent the views of Townhall.com. 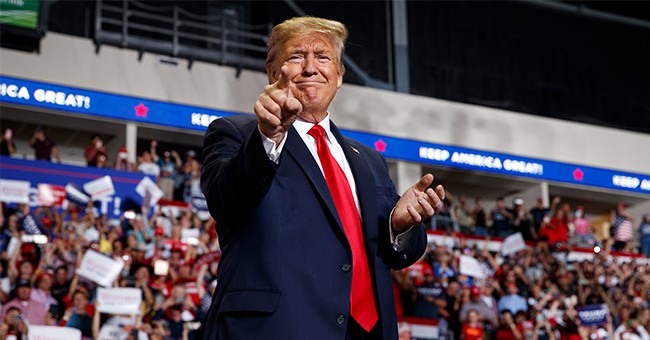 So saith CNN, the Times, the gang at LonelyNeckbeardedLeftistLoser.com and the rest of the cabinboy media, along with the carb-curious Fredocon dorks and the surviving furries, pseudo-Cherokees and other assorted Democrat weirdos currently wandering about in Iowa pestering farmers to join them for selfies. There’s always a new _____________, except the “bring him down” part just never seems to happen.

No coffee for the liberal establishment, because coffee is for closers (NSFW language, sissies). These geebos have been trying to close the deal since 2015, but all they have to do it with are the Rio Rancho leads – they never get the Glengarry leads that will put a stake through the heart of the Bad Orange Man.

The second most recent act in the endless fail-a-thon that is the elite’s hysterical reaction to the rise of Donald Trump was a gambit by the Stop the Hammering guy.

Lawrence O’Donnell claimed he had dirt about Russians controlling Trump because they co-signed some of his loans. He had nothing. Putting aside that when someone guarantees your debts you have leverage over him, Larry the Laughingstock had to apologize when his baloney turned to Schiff.

MC Hammered should have known that when it comes to Trump, you can’t touch this. But these leftist toadies never, ever learn.

So now, some deep state dirtbag has decided he can end-run classification (sound familiar?) and executive privilege and narc out The Donald to the House Dems by leveraging the whistleblower statutes. And what is the subject of said narcage? Allegedly, Trump told the Ukrainians that they should investigate why Joe Biden’s kid and brothers ended up with hugely lucrative sweetheart deals in that notorious Slavic cesspool of corruption.

To which Normal Americans reacted by asking, “Wait, Joe Biden’s kid and brothers ended up with hugely lucrative sweetheart deals in that notorious Slavic cesspool of corruption?”

You see, the problem with making the latest THIS WILL DO IN TRUMP! moment out of the President’s alleged attempt to investigate corruption by the Biden family is that it brings to the fore a scandal that the mainstream media has carefully covered up during the marathon of gaffes that has been Gropey J’s nomination campaign, i.e.that the Biden clan has obviously made a fortune exploiting HairPlug One’s elected offices. There’s no other explanation for their amazing success. Absolutely no one is thinking, “Well, the Bidens are a smart family of cunning and shrewd thinkers who totally could have scored these huge windfalls in Ukraine (and China too) even if Joe had not been a DC power-player for nearly 50 years.”

What’s hysterical is the blindness of these DC dummies who find it unsporting of Trump to call out the sordid corruption of their fellow grifters. Remember, they admire the Bidens. This kind of primo scam is what these swampies aspire to. And they actually believe that regular folks are going to think, “That’s not cricket! How dare that upstart Trump queer the Bidens’ deals!”

This is the problem when you have an in-bred elite that dwells in a pinko bubble of corruption n’ entitlement. They think stupid things and end up resurrecting issues they otherwise could have buried. Weren’t they just howling about how doing deals with Ukrainians was a bad thing when Paul Manafort did them? It’s nuts to believe that people who live on the dismal side of I-495 are going to think Trump is the bad guy for trying to shine a spotlight on a family of Delaware looters.

And of course, noted particle physicist Joe – because he’s smart – is on video bragging about how he told the Ukrainians that unless they fired a nosy prosecutor who was poking around sonny’s company they could wave dasvidaniya to a US loan. So, the whole extortion argument is…awkward.

And yeah, I know dasvidaniya is Russian. I’ve also been to Ukraine several times and have zero trouble believing that the Bidenloeones found plenty of Moe Greenskis and Hyman Rothoviches waiting there to do some sketchy deals.

So, this scandalabra is certainly, absolutely, definitely gonna do Trump in, and we can count on that because we have the usual lib suspects telling us so. The WaPo is assuring its eternally unsatisfied readers that yes, yes, this might be it! The Twitter blue check brain trust is weighing in that this is serious, so very serious! And Seth Abramson is probably still adding to his 678-tweet threat on how this is more emoluments and more Putin collusion and how this means the coming of the Supreme Court Marshal to arrest Trump for treason and the voices, the voices…

Oh, and there’s more impeachment babble – that’s the other scheme that has these nimrods gleefully tenting their soft, spindly fingers. You dummies. Here’s how impeachment goes. Pelosi gets head-locked by her commie caucus into allowing that circus to commence and you have that Willy Wonka worker reject Jerry Nadler plus Ed Buck’s bestie Adam Schiff ringleading it. When the persecution rests, the Republican defense stands up and says, “The President calls to the stand…Joe Biden and all the other Biden princelings and courtiers.” And then the Democrats freak and refuse to allow it and the Republicans say, not without a point, that impeaching Trump because he wanted a crime investigated kind of puts that crime at issue. But the Democrats will squelch the whole line of inquiry and normal Americans will cast some serious collective side-eye at that manifest cover-up.

Then the Dems will vote to impeach and it goes to the Senate, where Cocaine Mitch ensures that the Biden’s dirty laundry gets a nice long airing before putting it to a vote. Then 50 Republicans vote to acquit, with only Mitt Romney insisting on further humiliating himself by siding with the Dems. Next, Trump strolls down from Capitol Hill with a necklace made of the skulls of his enemies and defeats Big Chief Sitting Bolshevik (or whichever other Dem who is not Joe Biden runs against him) next November.

The latest ____________________ is yet another nothing burger, yet another faceplant, yet another exercise in ritual suicide by a despondent and broken elite that still cannot come to terms with its utter rejection by the American people. Yeah, Americans are going to be super upset that Trump thought that this Democrat dynasty of gypsies, tramps and thieves ought to be held accountable for its crimes. Go with that, Dems. Please. Hey, your losing streak can’t last forever.

Wondering what America is like if the elite can toss out an elected president because he refuses to play ball for Team Lib? Then check out my action-packed yet hilarious novels,   People's Republic, Indian Country and Wildfire. The fake conservative grifter doofuses whine that my books are “appalling,” thereby providing the lead blurb for Book IV (coming soon)!