Work Hard, Play By The Rules, And Be Hated By Liberals

Kurt Schlichter
|
Posted: Apr 29, 2019 12:01 AM
Share   Tweet
The opinions expressed by columnists are their own and do not necessarily represent the views of Townhall.com. 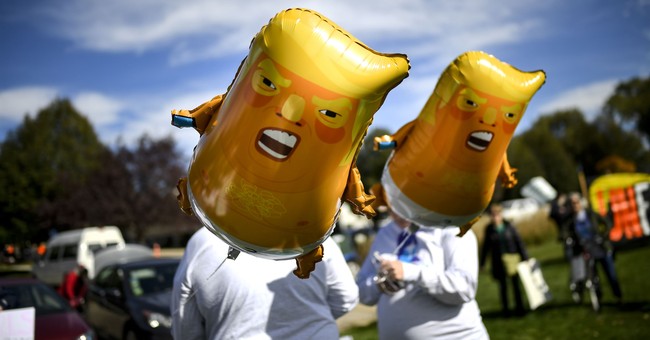 That famous formulation by Bill Clinton describing the Normal Americans that Democrats used to at least pretend to care about now describes the Americans that the Democrats openly hate – you and me.

We’re America. We work hard. We play by the rules. But everything bad is our fault, and the solution to every real or imaginary problem is to take more of our money and more of our freedom and hand them over to the liberal elite to redistribute among their minions.

How about “No?” It’s time to get militant, Normals.

Here’s a fun test, a little mental exercise for those of you so unwoke that you don’t get that the leftist objective is your enslavement (meaning your utter obedience to the ruling class and the total forfeiture of your right to participate in your own governance) and/or your death (whether through the fine grinding of time, fellow boomers, or through more proactive means on softball fields and elsewhere – it’s all good as long as you’re gone): Look at the 672,451 Democrats running for the chance to be crushed next year by Donald “3.2% GDP/3.8% Unemployment” Trump and see if you can find a single policy, position or promise from any of them that increases either your prosperity or your liberty.

Your prosperity. Your liberty. Not that of some pack of randos that constitutes a key Democrat demo. Not that of a sub-set of a sub-set of leftist-loving weirdos or of a constituency of greedy lay-abouts looking for further succor from Uncle Sucker. Not that of those dwelling at the farthest fringes of the acronyms/symbols/punctuation marks of the LGBTQZ4x&F#V™@!y£ü spectrum.

What do Democrats offer you, and the people like you, who work hard and play by the rules? Nothing, except hate and the demand that you give up even more of what’s yours so the lib elite can buy votes by redistributing it to people who didn’t earn it and don’t deserve it.

Come on, what is one single Democrat policy, position or promise that increases either your prosperity or your liberty?

Let’s see. Big Chief Warren, Crusty Commie Curmudgeon and several others want to give away “free college.” How will that help you? It won’t help me. The government did not pay for my college. I paid off my student loans, and got a shiny new law degree in return. Now, the government did pay for some of law school and my masters in Strategic Studies at the Army War College. This is because I was in the Army and went to wars. I worked for it, so it was not “free.” And you worked for yours too (paying directly or via loans), or your family helped, or you went into the military and dressed like a tree in foreign places, or you won a scholarship. You. So, the idea of paying for other people’s college too – because it’s our taxes that would pay for it and everything else these grifters promise their beggar clients – is rather unwelcome, to say the least. It’s going to decrease our prosperity.

How about abortion? The Democrats all want to expand your right to have an abortion pretty much up until the time the victim – I mean “the parasitic clump of cells” – can buy a pack of Marlboros and a sixer of Michelob. But that won’t increase my liberty. I will never have an abortion. That’s partly because men can’t get preggers, despite the insistence of the folks who love to tell you how much they love #science, so broadening my options vis a vis wasting babies will not increase my liberty even if I were so inclined. Nor will it expand yours, because it’s a pretty safe bet that if you have read this far you are unlikely to waddle down to the local “womens’ healthcare provider” to get some terminal “health care” provided for your 8.5-month-old pregnancy.

Guns? Talk about limiting liberty. They want to make you into a criminal for retaining the means to defend yourself, your family, your community and your Constitution. In fact, they want to make tens of millions of us into criminals just for wanting to exercise the right God gave us, and that the Second Amendment merely recognizes. They say it’s because we’re dangerous when we are armed. Damned straight – that’s the point of us having guns. But if we gun-owning citizens were dangerous to anyone except criminals and aspiring tyrants, everyone would know it.

The whole premise for disarming us is a lie – if they cared about “gun crime” they would sweep the ghettos in the Democrat-run cities and lock up the drug dealers and gangbangers who so frequently manage to miss the fellow scumbag they are popping caps off at and instead shoot a kid or an old lady coming home from church. But they don’t truly care about “gun crime.” That’s just another lie. They care about us hard-working, rule-playing citizens having a recourse to the tyranny they dream of. That’s the only threat they care about, not criminals.

They don’t want to take criminals’ guns; they want to give criminals back the vote. And, of course, diluting your power by adding jailbirds and convicts into the electoral mix…wait for it…decreases your liberty. The same with illegal aliens – it’s more dilution of your ability to govern your own country, and more taking of your money to give to people who should not even be here in the first place. Every Democrat is for expanding the electorate using the tsunami of Third World peasants they invited in with the express purpose of buying border-hoppers’ votes (with our money) so they can swamp us actual Americans at the ballot box.

Everything is your fault if you work hard and play by the rules. There’s global warming because you insist on driving Jeep Wranglers and eating Whoppers. Democrat union-run schools are useless because you won’t give them more money to waste. Health care is a mess not because of the Obamacare abomination they imposed upon us a decade ago but because you selfishly insist on choosing your own doctor and on people paying for their own health insurance.

Plus, you are racist. Creepy Joe’s entire campaign rationale is that the half of America that refused to vote for Felonia Milhous von Pantsuit is racist, as if you somehow secretly adore that tiny band of slack-jawed tiki torch nimrods. As a result, people like you who did not own slaves should pay reparations to people who weren’t slaves, but who do vote Democrat.

There are lots of other things wrong with you too. Pete Buttiwhatever, who you might have heard was gay and whose father might have been a mailman (maybe I am confusing him with another Rust Belt dork – they all blend together), thinks your Jesus is inferior to his Jesus. Kirsten Gillibrand thinks you are pro-rape because you are pro-due process. Eric Swalwell is mad because you won’t pay attention to his hackneyed trolling. Amy Klobuchar just wants to throw something at you.

You worked hard and played by the rules, and your reward is the contempt of the liberal elite (as well as of their cruise-shilling Fredocon Renfields). Has a single Democrat ever praised you for not feeding at the government trough? For defending your country against all enemies, both foreign and from Minnesota? Has a single Democrat cheered on your success now that the Trump plan has gotten the economy rolling, or are they promising a return to the bad old days of Obama/Gropey Joe? You just got a tax cut; they want to take it away so you can pay more so other people – Democrat-voting people – don’t have to work as hard.

They want to Make America Miserable Again. And you’re America.

Here’s the world the haters want for us, laid out in my action-packed (and occasionally hilarious) novels about the United States split into red and blue, People's Republic, Indian Country and Wildfire. Think Avengers: Endgame with fewer people in tights and more people being arrested for pronoun crimes. The erotically-defeated goofs at that sad website that replaced what used to be The Weekly Standard hailed these books as “appalling,” so you know