Advice To Help Our Beloved Democrat Friends Win In 2018

Kurt Schlichter  |  Jun 26, 2017
The opinions expressed by columnists are their own and do not necessarily represent the views of Townhall.com.
Top Columns
Trending on Townhall Media 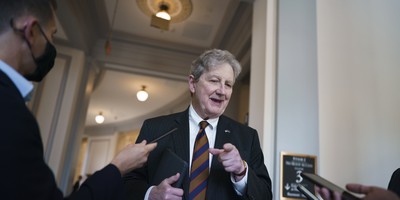 Since we conservatives humiliated Felonia von Pantsuit last November, it’s been all winning, all the time, from Neil Gorsuch to crushing the liberal climate cult to appointing a Defense Secretary nicknamed Mad Dog who prioritizes annihilating jihadists over making the infantry more welcoming to people confused about whether they are boys or girls. But that’s unfair to the Democrats – as our liberal friends teach us, our success belongs to them too, just like everything else we earn, build, or create belongs to them too.

We need to share our winning. We need to be bipartisan-curious!

After all, Democrats are always offering Republicans helpful advice, like “Run away from the guy who beat The Smartest, Most Qualified, And Smartest Woman In The History Of Ever!” and “Reach across the aisle so we can grab your hand and drag you into our reeking cesspool of institutional progressivism!”

So, in that same spirit of cooperation and love, I once again humbly offer some ideas for our liberal friends to help them win in 2018, which still all boil down to this: don’t change a thing. It’s more important than ever for Democrats to maintain a steady course. Just ignore that iceberg up ahead; it’s probably racist anyway.

Look Democrats, you’re doing great. After a half year of Trump and several special election moral victories – which are the best kind of victories – America is digging your vibe. Everyone loves the Democrats and their can-do message of opposition to Trump, entitlement to our money, resistance to Trump, demands for even more of our money, and dog-whistlin’ about murdering Trump and anyone else who doesn’t hate Trump or want to give Democrats our money.

Keep Nancy Pelosi! She’s the strategic genius who brought you to the pinnacle of success upon which you perch today! And no, Georgia 6 was not her fault; global warming caused it to rain on election day, and you know how Nan and other Democrat women react to water!

Sure, the GOP tries to diss her, but what they call liabilities are really assets! She’s not a rich, ageing, out-of-touch San Francisco leftist who never met a bizarre lifestyle she didn’t embrace, nor or a traditional one she didn’t seek to crush under her stiletto heels. She’s a resource-positive, seasoned, woman-of-the-people – people who just happen to hate believing Christians and Jews, unborn babies, and America.

Doubt me? Then ask around Williamsburg or the Haight-Ashbury while you’re walking your animal companion to the fair trade fruit co-op – everyone loves Nancy!

She’s a keeper. So keep her!

Next, continue to stay focused on Russia, Russia, and more Russia! It’s working! People still care about it to the exclusion of all else – look at how much time Maddow spends on it. If The Rach Bomb doesn’t have her long, soft finger on the pulse of America, I’d like to know who does!

Need more convincing? Well, I recently visited a union hall in Wisconsin, which totally happened. There, beneath the portrait of Hillary that the steelworkers and construction journeyman ensure is garlanded with roses each morning, I shared feelings with the kind of workin’ guys Democrats love.

“My big issue,” said Gus, an autoworker, “is Russia! Sure, it’s been a year and no evidence has leaked out, but I’m still hoping for something, anything. And thanks to my job being outsourced to Juarez last summer, I have plenty time to focus on it!”

“Yeah, damn straight!” said Lenny the Teamster, smoke curling up from the Marlboro clenched in his meaty paw. “This Russia Trump treason thing is important to me, but not as much as making sure our society uses intersectional critical theory to fight the patriarchal paradigms that reinforce systems of oppression directed against womyn, trans individuals, and otherkins.”

“Down with phallocentricity!” cheered Gus, raising his Pabst. See, if you just address their priorities, the Rust Belt is ripe for the re-taking!

Which bring us to my last, and perhaps most important, piece of advice – keep accusing us of planning mass murder while you’re also giggling in delight every time some Hollywood moron starts publicly living out conservative killing fantasies!

And your subtle justifications for murdering of conservatives? Keep that up too, because I have to tell you, we’re intimidated. So what if that socialist centurion sprayed the ballpark with 100 rounds from a long gun and managed to merely wound a few targets before being dropped by a couple of cops armed only with handguns? Maybe by next time – and you’re doing your best to ensure there’ll be a next time – your swelling army of bangin’ Bernie Bros will have dramatically increased their tactical skills beyond what they learned in their gender studies seminars and from making coffees for people who drive Volvos. All we normals have to compete with that is years of weapons training, often from in the military. So keep it up – threaten to make my cautionary novels about leftist tyranny a reality. That seems like a solid plan that will end well for you.

The bottom line is that everything you’re already doing is still fantastic. Why change? That would be an admission that you suck, and that can’t be a thing! No, it’s all the voters for being racist and sexist and transphobic and climate deniers and racist, but if you continue to call them out as the monsters they are, and show them that you have no intention of changing, they’re going to respond. And I think that response could be a wave election.

I’m just not going to say for whom.