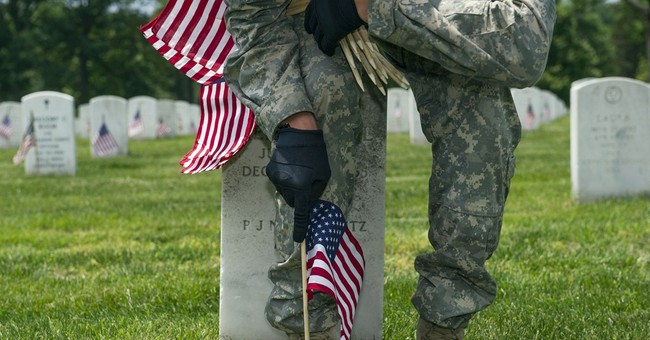 Happy Memorial Day. Sadly, many in Washington seem committed to pushing policies that will ensure that there will be plenty of deceased veterans to memorialize.

The bureaucrats infesting the VA system, that mindless, bloated golem of socialized medicine, have come up with a unique way of hiding their utter inability to perform their most basic tasks. They simply leave patients off the official treatment lists so they can avoid disclosing the endless delays in getting basic services our war heroes endure. And for some of these vets, these eternal waits for medical care become eternal rests.

But hey, the bureaucrats still get their bonuses. Unless they get caught. Then the VA Secretary gets really, really mad. Mostly, it seems, about them getting caught.

These government flunkies aren’t even competent at pulling off incompetence.

The vets trapped in the VA system are showing us all what the single payer future the liberals fetishize over will be like. If the government bureaucrats will let the veterans who the politicians need as campaign props drop dead, what chance have you got?

Naturally, the VA has been praised by warrior-scholars like Ezra Klein and Paul Krugman as a shining example of can-do government success. Of course, the only vet a guy like Ezra Klein knows is the one who gives his poodle her distemper shot. As for Krugman, he hasn’t been so wrong since he was shilling for Enron – no mean feat for that malignant hack.

And then there’s Eric Shinseki. In the Army I served in, a leader is responsible for everything his unit does or fails to do. If you don’t measure up and don’t display the character to resign, you get fired. Apparently, Shinseki served in a different Army.

This VA scandal came under his watch. This is a systemic failure, not an isolated instance of wrongdoing. People he was responsible for are dead because his organization failed again and again and again. Yet he hangs onto his job instead of taking personal responsibility.

It’s embarrassing. I wish it was surprising. What a disgrace.

Washington doesn’t discriminate when it comes to policies that will inevitably lead to more dead warriors. Many of our politicians are happy to put our serving warriors at risk too.

When it comes to cuts, the first on the chopping block is inevitably military readiness. It’s the fat that gets retained – the lazy legions of do-nothing civilians, the politicians’ cronies’ pet projects, and the fashionable fads always survive. They cut the things that keep our fighters alive.

Here’s one example, the A-10. It’s a 40 year old warplane that looks like the designer guzzled too much Jack Daniels then pieced it together out of junkyard scraps. They don’t call it the Warthog for nothing. But to our guys on the front line it’s the most beautiful thing there is.

The A-10 can carry tons of bombs, but its big selling point is that 30mm cannon poking out of its stubby nose. The Warthog flies low and slow around the battlefield, lingering and waiting for the call. And when the call comes, well, there’s going to be a run on virgins.

The Taliban hates the A-10 with a cold fury. You can’t get higher praise. Naturally, the geniuses in Washington want to get rid of it and replace it with zillion dollar supersonic jets that are utterly unsuited for the job of frontline air support. Why? They claim we just can’t afford the plane we already have.

So, when some lieutenant is in contact out in the field, and the jihadi swarms are advancing to overrun his platoon, we can just tell him that we had many, many more important things to spend our money on besides ensuring that he and his troopers aren’t massacred.

No, tough luck, LT. You get to die because we’d rather spend money buying votes. And anyway, you deployed guys’ votes never seem to make it back to be counted.

I won’t presume to speak for all veterans, but I think I speak for a few. Let’s make a few things really, really clear to the people back in Washington.

That means that when we go to fight, we have the best equipment, and plenty of it. If you think doing that is too expensive, maybe you need to rethink your war.

That means that when we come home, wounded or just wanting to move on with our lives, you provide us with what you promised us. And if you think doing so is too expensive, maybe you should have thought of that before sending us over there.

It’s about time our serving warriors and honored veterans stopped getting pushed to the back of the line behind welfare cheats, corporate cronies, and freakish performance artists.

If you intend to vote for a candidate who refuses to put our warriors first, then in a way you are even lower than the scumbag progressive vermin who tormented our returning Vietnam War heroes. At least those dirtbags had the guts to face our warriors when they spit on them.