The Tea Party Isn't Dying – The GOP Establishment Is 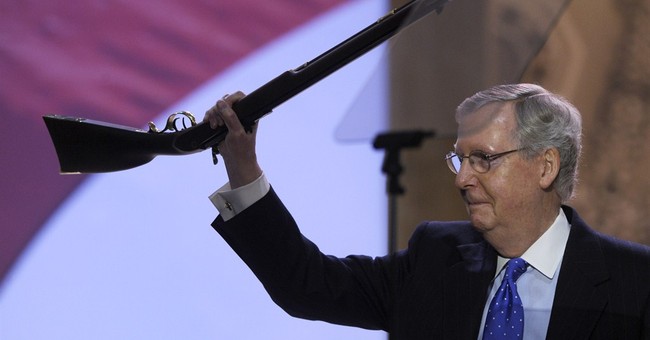 If the conservative insurgency has been crushed, why was Mitch McConnell walking around onstage at CPAC with a musket? He couldn’t have sucked up to the right any harder if he wore a tri-corner hat and had the Gadsden flag tattooed on his rear.

The death of the conservative revolution, the Tea Party, or whatever you call it, has not merely been greatly exaggerated. It’s been flat-out lied about.

It isn’t dead. It just changed, from a shoestring operation to one with real clout. And it’s well on its way to doing what it set out to do – arm-twist a flabby, comfortable GOP into fighting for conservative values instead of just talking about them at election time.

We conservatives have two very different opponents, opponents who sometimes operate in concert. After all, they both want us gone.

The first opponent is the left. They still call us the “Tea Party,” though we rarely use that term anymore. It’s fun to hear the liberals say it – it’s like listening to grandparents trying to sound cool. Yeah, those hepcats are sure hip with their cool jive, daddy-o.

These clowns really believe that we are a racist movement devoted to the beliefs of the late Democrat icon and KKK kleagle Senator Robert Byrd. It’s hard to imagine a bigger misunderstanding of one’s opponent.

They just don’t get what we are about or what we want, which they will find is a problem. Take it from someone with a little bit of military experience – you really should try to understand your enemy. It helps keep you from being, say, humiliated in a Florida special election.

And that advice isn’t coming from some dead white male – Sun Tzu was saying it 2,000 years ago. So lefties should at least listen for the sake of diversity, but they won’t. They’re too invested in their unearned smugness. And they’re obviously racist.

We conservative insurgents have another opponent, but this opponent recognizes us for exactly what we are – a dangerous, existential threat. This opponent is the GOP Establishment, and its members hate and fear us for entirely different reasons.

The problem with the GOP Establishment is not its ideology – most of its members, in the abstract, probably generally agree with our positions. What they hate is that we intend to utterly upend their world. They have spent years in the Beltway, climbing the ladder, building careers, all within the system as it exists today. They are invested in that system just like the liberals, regardless of superficial differences over mere policy preferences.

They want to gather power within Washington then redistribute it after they take their cut. We want to re-wire the system so that Washington is left off the grid to wither back down to the miserable backwater it used to be – and should be.

D.C. is awesomely wealthy, full of fine clothes, sumptuous food, gleaming restaurants, and much more attractive people than when I interned there in 1986. The recession missed Washington, a town that produces nothing except problems for the rest of America yet is better off than anywhere else in America.

We want to end that. That we want to destroy the cushy status quo is why the GOP Establishment hates us. That we can influence elections is why it fears us.

There is a lot of propaganda about how the Tea Party ruined the GOP’s chances to take the Senate. There’s never any recognition of how conservatives are solely responsible for taking back the House. No one ever talks about the Establishment candidates who failed in places like North Dakota and California.

If the Establishment had its way, we’d have Senator Crist instead of Senator Rubio. Hell, if Crist turns back Republican next week, they’ll probably start backing him for president. That is, unless surefire winner Jeb Bush decides to run.

You always hear about a few eccentric Senate candidates the Tea Party gave us, like the Delaware sorceress and the Indiana gynecology professor, but you don’t hear about how their loser GOP primary opponents supported the Democrats in the general. So we should have supported clowns who turned traitor the moment they didn’t get their way? No thanks. If the Establishment wants loyalty, let’s see it show some.

We conservatives are forcing the GOP Establishment to at least start pretending to act conservative. Mitch McConnell didn’t shake his blunderbuss at CPAC because he loves mixing with peasants; he did it because he’s scared, and he should be. The surrender caucus didn’t retreat on guns and amnesty because they wanted to get slammed by the mainstream media. They did it because we’ll primary them at the drop of a hat.

And some of them – not all, but some – should be primaried. If Pat Roberts can’t deal with the fact that he’s not in Kansas anymore in the primary, he might lose in the general. If Thad Cochran can’t hold his Mississippi seat against an upstart after being a senator for a zillion years, then he doesn’t deserve six more.

Time is on our side. The old GOP is passing away into history. The energy, intellect and grit is all with us conservatives – anyone out there ever see a passionate squish? We’re pushing the party, kicking and screaming, to the right.