What Is It With Democrats And Death?

Kevin McCullough
|
Posted: May 26, 2019 10:15 AM
Share   Tweet
The opinions expressed by columnists are their own and do not necessarily represent the views of Townhall.com. 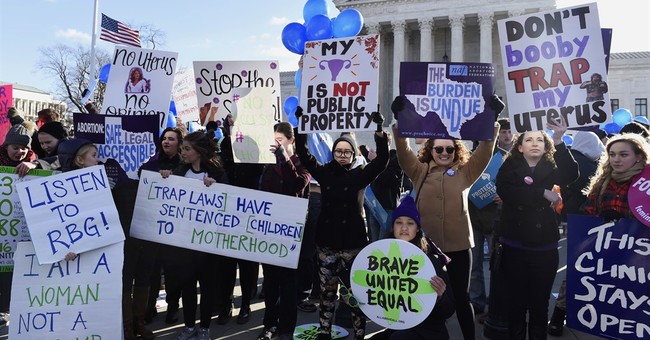 Do Democrats want children to die?

They oppose legislation to prevent them from being killed. They pass legislation that seeks ways to ensure their death. They make outlandish and ridiculously stupid claims as justification to do so. And when presented with evidence to the contrary they flinch.

Recently I found myself in a conversation with perhaps the single most influential person not currently in elective office in New York City.

We were discussing the impact of the six or seven states that have adopted “heartbeat bills” and Alabama’s recently passed nearly 100% abortion ban.

This person’s observation specifically: “If Republicans don’t stop with the pro-life issue, they will push women to vote for... (dramatic pause inserted) ...Democrats.”

So Democrats are supported by those who want the right to see their children dead.

In New York it was the Democrat elected Assembly and governor who passed, signed into law, and then gave themselves a standing ovation on the dead-of-night passage of that state’s new legalization of killing children after they had been born.

In Virginia it was a Democrat governor who eerily described on morning radio step by step what happens when they decide whether a born child has the right to live or be killed.

On Friday, at a gathering of nearly 1300 New York City/Tri-State area pastors, those gathered learned that Democrats have opposed the expansion of crisis pregnancy centers, while actively pushing for the expansion of abortion facility licenses. This happening while three NYC Democrat-controlled zip codes are the only ones where abortions outnumber live births.

Democrats often claim that to be in favor of killing of children is to be “pro-woman.” Yet they refuse to acknowledge that their policies have ushered in the death of more than 30 million women in recent years.

Democrats claim that no child should be forced to live a life unwanted—that every child—they argue should know a life of love. Yet they fail to recognize that at any single point in time there are somewhere around 2 million couples seeking adoption while last year Americans killed a touch more than 800 thousand innocent babies in 2018.

Democrats have argued for mandatory tax-payer funding for low income women to have their children killed without having to pay for it. They have also turned around and resisted efforts by then President George W. Bush to incentivize and encourage marriage  which statistically speaking provides greater financial and emotional security for the woman and the child.

Democrats refuse to assist the children separated from real families (not the coyote rapists) in the current immigration crisis. Democrats also looked the other way when President Clinton signed the family separation law, and President Obama began to enforce it.

And this week Nancy Pelosi led the charge of Democrats and for the fiftieth consecutive time were able to kill legislation that prevented post birth killing of children already born. Akin to the dead of night New York State Assembly vote—Democrats on the national stage voted to keep the killing of born children—legal.

They claim it’s all about compassion.  They cite statistics that are in themselves so small that they—statistically speaking—almost never come into play. Or do they?

Bottom line Democrats argue in favor and tirelessly work for the death of children—born and unborn.

I just don’t get why.

It seems to me to be very cruel and completely lacking in the compassion they too often invoke.