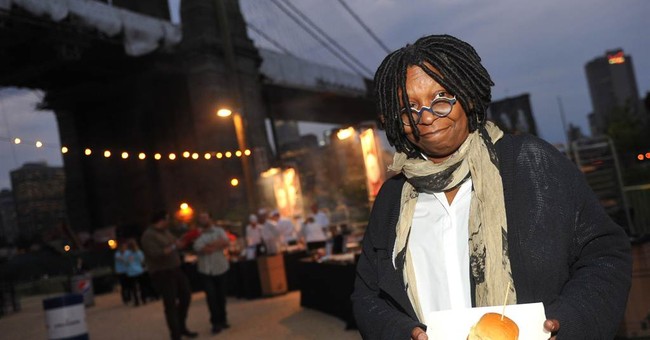 As news reports have been exposing new chinks in the armor of Virginia Democratic gubernatorial candidate Terry McAuliffe on a nearly daily basis, talking heads on the left have been amping up their incendiary rhetoric in an attempt to cast Republican Ken Cuccinelli as a fire-breathing bogeyman.

“First of all, how do I know that you haven't indulged,” demanded Goldberg on The View. “The second thing is: Why are you in my bedroom? Get out! Get out!”

While liberal media types frequently don’t let the facts get in the way of the story they want to tell, in this instance their blinders are particularly egregious as this issue has been hashed out repeatedly and completely throughout the campaign, with Mr. Cuccinelli making it clear that he advocates using the statute in question for the sole purpose of prosecuting child predators that would otherwise escape with minor penalties due to the way Virginia’s laws are structured.

Current Virginia law only allows sex crimes involving minors over 15 to be tried misdemeanors if the statue is not in place. As I have written before and has been covered extensively, Cuccinelli has only sought to keep it in place for the express purpose of bridging the gap between 15 and 18:

“As the court moved to overturn the statute, the Attorney General was in the midst of prosecuting the case of William Scott MacDonald, a 47-year old man who had solicited a 17-year old girl to perform sex acts. Only the anti-sodomy statute allows sexual predators like MacDonald to be charged with a felony – if the statue were overturned, sex with a minor over the age of 15 could only be handled as a misdemeanor under current Virginia law.”

Even Terry McAuliffe’s campaign, after initial sabre rattling, backed off attacks on the issue as McAuliffe found himself unable to answer the simple question of whether, if put in Cuccinelli’s place, he’d use the law if it meant harsher penalties for pedophiles.

In addition to ignoring questions from reporters, McAuliffe failed to answer a Commonwealth attorney’s inquiry about his position on the statute. When queried about the issue on a conference call with state attorneys, McAuliffe first claimed ignorance and then promised to follow up the next day. He never did, according to a report from The Washington Post

But the Whoopis of the world haven’t let their own candidate’s reticence stop them. This kind of ill-informed rhetoric has multiple consequences beyond what what a talking head looking for shock value may comprehend:

First, it creates widespread confusion among Virginians about the aims of not just Cuccinelli, but the numerous other Virginia attorneys from both parties who’ve used this statute to bring predators to justice. 90 sex offenders have been prosecuted under the anti-sodomy statute since 2003, and 38 of those cases were handled Democrat attorneys.

Secondly, Cuccinelli and his family became the target of threatening emails in the wake of Goldberg and Maddow’s diatribes, which their followers understandably heard as calls to action.

This isn’t responsible stewardship of the platforms these media figures have been afforded; in the future we can only hope they will take the time to get their facts straight and consider potential implications before going off half-cocked on the air or in print.

And, when examined, those facts indicate that Ken Cuccinelli is just doing his job using the tools he has at his disposal. His post as attorney general doesn’t allow him to make laws, only enforce them to bring criminals to justice and keep Virginians safe from harm.