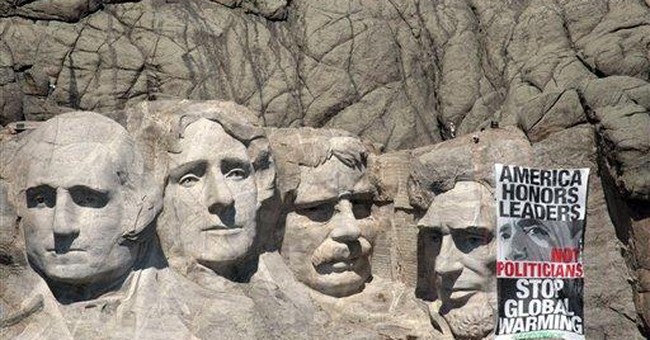 Editors' Note: This piece was co-authored by Ken Klukowski.

"Ever since Teddy Roosevelt first called for reform in 1912, seven presidents — Democrats and Republicans alike — have taken up the cause of reform time and time again," President Obama said in a statement hailing the Christmas Eve Senate vote to take over 1/7 of the nation’s economy. "Such efforts have been blocked by special-interests lobbyists who have perpetrated the status quo that works better for the insurance industry than it does for the American people."

Note the date of TR’s “calling” for reform. It’s 1912. Nationalized health care was part of the platform of the Progressive Party that year and every year thereafter. Americans are more familiar with the the name Theodore himself gave to that third party bid. After being shot by a would-be assassin in Milwaukee, TR said it takes more than a single bullet to stop a Bull Moose. Instantly, the colorful sobriquet was applied to the Progressive Party.

What did Theodore himself think of his new-found allies, the Progressives? He was sincerely committed to reform. And he certainly thought he had been cheated out of the Republican Party presidential nomination in 1912. After all, he had won all the state party primaries in the limited number of states that held them. But TR also recognized that some of his Progressive supporters went over the top. For them, he coined the wonderful phrase, “the lunatic fringe.”

TR did not want to wage war against wealth, only against the abuse of wealth. He termed the plutocrats of his time “malefactors of great wealth.” In modern terms, TR was for jailing the Bernie Madoffs and freeing the Bill Gateses. TR understood that economic growth was essential to modern industry. He protected our natural resources--more than any previous President--but you could count him among those who stood for conservation. He believed America’s treasury of natural beauty could be conserved for future generations while enabling Americans of his own time to responsibly use and replenish their nation’s bounteous resources.

Today, it would be fair to say the Lunatic Fringe is in charge. The health care bill just passed in the Senate is a hodge-podge of giveaways and bribes. Why should Nebraska not pay Medicare costs imposed by her senior Senator on 49 others states? And why should Nebraska citizens be forced to pay for abortions in New York and California?

President Obama’s Environmental Protection Agency has issued an “endangerment ruling” on carbon dioxide. What must this ultimately mean for American industry? For American population. Every human being discharges carbon dioxide into the atmosphere by the simple act of breathing. Can it be that Everyone Pollutes the Atmosphere?

Theodore Roosevelt could rightly be called America’s first “pro-family” President. He studied the Census Bureau statistics. He was deeply concerned about rising divorce rates and lowering birth rates. He understood that healthy children raised by loving, married parents were the true source of a nation’s strength. On a train trip to the West Coast, TR welcomed crowds of farm families that swarmed to meet the President. He praised them for bumper crops of wheat, corn, oats, and barley. But mostly, he welcomed a bumper crop of healthy American children. Among the majestic redwoods of California, he refused to speak until tacky billboards were removed from the stand of ancient trees TR regarded almost as a sacred grove. When will we have another President who is not only a tree-hugger, but also a baby-kisser?

The recent economic meltdown began in the housing industry. David Goldman, a savvy Wall Streeter, has written in First Things that young families with dependent children are the drivers of the home mortgage industry. And the U.S. has no more of these today than we had in 1969. This is the source of the real economic crisis. Theodore Roosevelt would certainly understand this.

How unfortunate that President Obama takes his inspiration from TR’s greatest error. Roosevelt was wrong to run on a platform that called for socialized medicine. He was even wrong to run at all in 1912. His Bull Moose candidacy fatally split the Republican majority and allowed the election of the disastrous Woodrow Wilson as a minority President. Nonetheless, for his undoubted achievements--including a Nobel Peace Prize awarded--imagine this--for actually making peace--TR deserves his place on on Mount Rushmore. Will President Obama’s lunatic fringe demand he be placed there, too?