Katie Yoder
|
Posted: Jan 07, 2020 7:57 AM
Share   Tweet
The opinions expressed by columnists are their own and do not necessarily represent the views of Townhall.com. 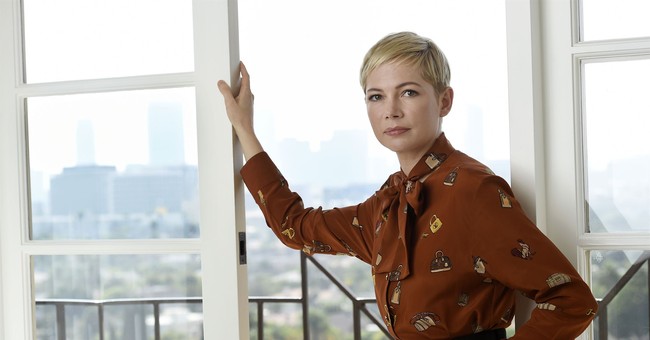 Publicly supporting abortion appears to be one way to win the adoring praise of film critics – and the media.

On Sunday, actress Michelle Williams declared her support for a “woman’s right to choose” while accepting the Golden Globe for “Best Performance by an Actress in a Limited Series or a Motion Picture Made for Television” for her role in Fosse/Verdon. In response, media outlets from CNN to Time magazine commended her “powerful” and “empowering” speech. Women’s media, including Bustle, went so far as to praise Williams’ comments as “especially poignant” because she delivered them while pregnant with her second child.

“I’m grateful for the acknowledgement of the choices I’ve made,” the 39-year-old actress began her speech. “And I’m also grateful to have lived at a moment in our society where choice exists, because as women and as girls, things can happen to our bodies that are not our choice.”

"I've tried my very best to live a life of my own making,” she continued. “And I wouldn’t have been able to do this without employing a woman’s right to choose.”

"To choose when to have my children and with whom, when I felt supported and able to balance our lives, knowing as all mothers know that the scales must and will tip towards our children,” Williams added. “I know my choices might look different than yours, but thank God or whomever you pray to, that we live in a country founded on the principle that I am free to live by my faith, and you are free to live by yours.”

She concluded by urging women to vote “in your own self-interest.”

Her comments won the admiration of national media. CNN’s headline asked readers to recognize the “powerful speech about choice” while Slate called Williams’ “speech about abortion” the Golden Globes’ “most powerful moment.”

Williams’ speech “stood out in its rhetorical elegance, impassioned delivery, and surprisingly personal nature,” writer Christina Cauterucci typed. “Its power is a testament to the importance of women’s representation in politics: No one knows the value of reproductive rights like someone who’s exercised them."

The New Yorker’s headline demanded “Michelle Williams for President.” That’s because, as writer Michael Schulman stressed, “There was no more eloquent plea” at the Golden Globes.

“Our political candidates could take notes on fusing the personal and the political,” Schulman said of her “beautifully angled” speech.

The Guardian recognized the actress as the “the real winner of this year's Golden Globes.” Film critic Ryan Gilbey declared, “were there a prize for most inspiring speech at the Golden Globes, it would go straight” to her.

For CBS News, Li Cohen highlighted that Williams “took home a best actress Golden Globe Sunday night, but not before shining the spotlight on abortion rights.”

According to New York Times writer Maya Salam, Williams spoke “personally about the importance of women’s rights and reproductive freedom.”

Glamour contributor Abby Gardner lauded Williams, who “may just be the best speech giver in all of Hollywood” because “she creates a cultural moment with her powerful words.”

“Let’s just give Michelle Williams all the awards, all the time,” Gardner concluded.

Or does it? The idea that a woman’s success relies on abortion – the ending of a human life – not only limits women but also fails to cherish their unique participation in the creation and love of a new person.

Our society, our culture should always stand for more than our “own self-interest” – especially when it concerns another’s life.