Katie Kieffer
|
Posted: Jul 10, 2017 12:01 AM
Share   Tweet
The opinions expressed by columnists are their own and do not necessarily represent the views of Townhall.com. 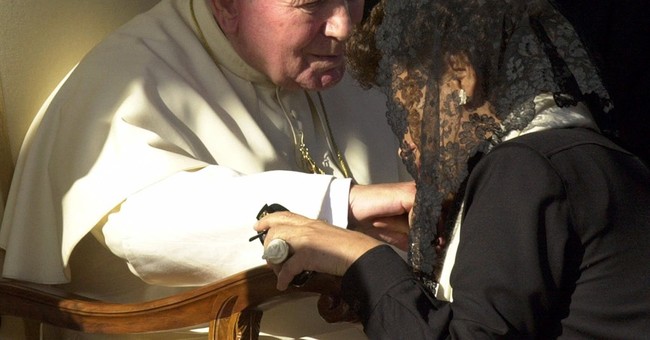 As in 1984, the Catholic Church has a historic opportunity to bring society closer to God in solidarity with the world’s most powerful political leader.

President Trump was relaying how—in 1979—one million Poles attended Mass by Pope John Paul II and, amid his sermon: “…suddenly raised their voices in a single prayer … [and] sang three simple words: ‘We want God.’”

And then President Trump went to a place no modern politician is brave enough to go: he named the most important missing element of modern life—God. “The people of Poland, the people of America, and the people of Europe still cry out ‘We want God.’”

Except next to no one is publicly crying out for God these days. Many Americans are afraid to mention God in public much less in private conversation. Trump was courageously giving voice to the silent cry for God that millions of humans hold deep within their hearts.

A Rock that Rocks the Boat

We think of rocks as naturally solid and sturdy objects. But it takes a prolonged or intense force to create a rock. A volcano converts lava into rock. And scientists just discovered that the concrete ancient Roman architects used to build sea walls became stronger after spending hundreds of years in the ocean.

What do rocks have to do with Trump? Quite a bit, actually.

After the Apostle Peter denied Christ three times, Christ did the opposite of what you or I might do if a friend let us down and called Peter a “rock;” the foundation upon which He built His Church. For, Christ knew the depths of Peter’s heart and his potential as a leader.

Like Peter, Reagan and Trump are flawed men. Before becoming President of the United States, both men made mistakes. And Trump has shown us that “turning the other cheek” isn’t always easy for him to do. He took the high road after so-called comedian Kathy Griffin did a photo shoot holding a model of his decapitated and bloody head. But he’s let others—like MSNBC anchor Mika Brzezinski who publicly attacked his intelligence, masculinity and sanity—get under his skin.

Yes, Trump is not perfect. He’s human like you and me. But, like Peter, his heart seems to be in the right place.

What other politician talks about God as openly as Trump? We do need God. And we need more leaders who publicly acknowledge this need.

President Reagan collaborated with Pope John Paul II on the common goal of disemboweling communism and the former Soviet Union.

Pulitzer Prize winner Carl Bernstein writes that Pope John Paul II and Reagan formed a secret alliance against communism that centered around Poland: “A free, noncommunist Poland, they were convinced, would be a dagger to the heart of the Soviet empire; and if Poland became democratic, other East European states would follow.”

The papal-presidential pact smuggled supplies (from food to printing machines) and spies (both clerical and lay) into Poland and slowly but surely grew a resistance movement that ushered Western values into Europe and destabilized communism.

Today, Trump is boldly urging the world to remember the example of Poland and root out a new global threat, namely Islamic extremism.

Catholics and Christians—why not urge the Vatican, the world’s most powerful non-partisan force—to support Trump’s call to return God to society?

Rather than hyperventilating when Trump falls, like the time he called Ms. Brzezinski “low I.Q. Crazy Mika,” we could remember that he’s not a saint. Maybe someday. Today, Trump remains rough around the edges yet brimming with charismatic zeal.

No one can deny that Trump is passionate about America just as no one who reads the Bible can deny that Peter, at heart, loved Christ. Trump is already a billionaire. He doesn’t need the stress of his 11-year-old son Barron having nightmares of a comedian holding Trump’s decapitated head.

President Trump clearly feels that he’s capable of making the United States a better place for Barron—and the rest of us. So instead of enjoying his family, wealth and golf courses in peace—he’s taken on the world’s most demanding job. And last week he took a page from Reagan by boldly doing what no other politician has the guts to do. He asked us to follow God.

Trump can’t turn the world into a more God-fearing society alone. It is crucial that we do our part as well. A great place to begin is by encouraging Rome to break free from any attachment to popularity. Let us urge the world’s two most powerful leaders and cities to unite around our fundamental yearning: We want God.