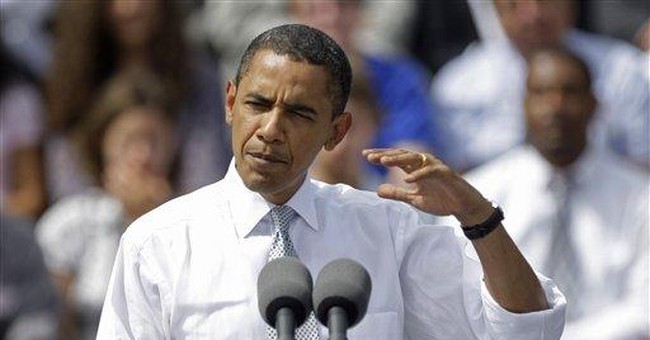 The mix of politics and religion can be an intoxicating cocktail. Just now, you can smell the incense everywhere, from Martha's Vineyard to Washington. For a left that obsesses over a wall of separation between church and state, when death comes and health care bills need rallies, there is little hesitation to break out the devotional smells and bells. But the loss of Sen. Edward M. Kennedy, one of the most prominent Catholic politicians in the United States, a leading proponent of health care reform and major supporter of the president's agenda, should not obscure a pivotal fact: Barack Obama has put himself at war with the Catholic Church.

In one of the most overlooked news stories of the health care debate, the president said, during a conference call organized by liberal religious activists: "I know there's been a lot of misinformation in this debate. And there's some folks out there who are, frankly, bearing false witness."

It's doubtful that the president actually wants to engage in a public examination of political conscience. Because bringing up the eighth commandment inevitably makes one meditate on the fifth, which deals with human life itself. Obama's accusation was made in direct reference to the debate about abortion and the health care bill. "You've heard this is all going to mean government funding of abortion," the president said. "Not true." According to Obama, "fabrications" "have been put out there in order to discourage people from meeting what I consider to be a core ethical and moral obligation"; in other words, that most righteous and noble of ideas: socialized medicine.

And with that, the president inadvertently began to pull away the vestments from the eyes of Catholics who think he is a perfectly acceptable representative of their views.

On August 11, Cardinal Justin Rigali sent a letter to members of the House of Representatives about the health care legislation under consideration. He highlights legislative language that would open the door to taxpayer-funded abortions. He points out that when amendments were introduced this summer that would protect against this -- protect life -- they were shot down. That's a bad precedent. If that's how life fares when the C-SPAN cameras are on, what happens when it comes time for the final closed-door compromises?

Not only is Rigali the archbishop of Philadelphia, he also engages in the health care debate in his position as chairman of the Pro-Life Activities Committee of the United States Conference of Catholic Bishops, speaking on behalf of all of the Catholic bishops in the United States. He's also far from the only bishop who has taken to writing and speaking out against some of the harmful details that have turned up in some versions of the legislation. Denver's Archbishop Charles J. Chaput put it bluntly: "Killing or funding the killing of unborn children has nothing to do with promoting human health, and including these things in any 'health care' proposal, no matter how shrewdly hidden, would simply be a form of lying."

The Catholic coalition against the president and his reckless claque gained an unlikely ally in liberal preacher and Obama collaborator Jim Wallis (author of "God's Politics: Why the Right Gets It Wrong and the Left Doesn't Get It") recently. In a CNN interview, Wallis admitted what the president wouldn't: that current iterations of ObamaCare are not clear "yet" on abortion funding. Is Wallis bearing false witness too?

There are many complex, legitimate issues that blur the lines between moral obligations and political choices. But sometimes the choices are crystal clear. For Catholics, any expansion of legal abortion -- and taxpayer-funded abortion --speaks to the most profound obligation: to protect vulnerable human life.

So the president's casual and patronizing invocation of a commandment was the ultimate in unholy political disses. And while the coverage may pale in comparison to the ubiquitous coverage of the Kennedy funeral Mass, it is significant as a practical, moral, and political matter.

If Obama didn't care about the mere moral factor, if he could put aside the political aspect, a very practical facet still remains: there are over 600 Catholic hospitals in the United States. The bishops speaking out against ObamaCare represent the largest health care provider in American history, one that has been vital to the American story. And they are, by the way, on board with the idea of reforming health care. But as another bishop, William Murphy of Rockville Center, N.Y., put it in an earlier communication with Congress, "Genuine health care reform that protects the life and dignity of all is a moral imperative and a vital national obligation."

President Obama is treading on multiple commandment violations. And while that is a matter for his eternal and political soul, as a policy matter, it's unconscionable.