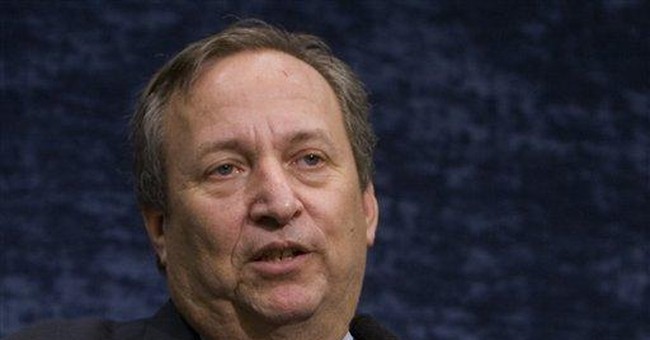 Fresh ire aimed at former Harvard University President Larry Summers prompts the question: Shouldn't there be a statute of limitations on dumb things expressed in public?

Forever accursed is the economist and Clinton-era treasury secretary for having raised -- more than three years ago -- the eensy-weensy possibility that innate differences between men and women might explain in part why more men than women reach the top echelons in math and science.

His comments, though not completely without scientific basis, unleashed a millennium worth of female scorn, making Hell a suddenly attractive destination for the discriminating traveler in search of cooler climes.

Research pointing to male-female differences that could partly explain different career outcomes is available to anyone in search of clues to the gender universe. But let's not go there. The social construct versus hard-wiring debate will continue unabated until the last woman utters: "No, honey, you stay in bed. I'll go see what that noise was."

For these purposes, let's stipulate that Summers said a dumb thing. He didn't, really. Provocative, yes, but it was a question about theory, not an assertion of belief. Impolitic? Without question. Still, we'll call it dumb.

Should said offense forevermore disqualify Summers from public service? Or even public appearances?

Summers was driven out of Harvard following his remarks. In September 2007, he was dropped as the keynote speaker at a University of California Board of Regents meeting when a female professor circulated a petition to have his invitation withdrawn.

Now, feminists have begun raising objections over speculation he might be considered for a second term as treasury secretary. Kim Gandy, National Organization for Women president, expressed her concerns to the Huffington Post. Gandy acknowledged that Summers is a smart guy on economics, but wondered whether his perceived bias would preclude women being hired within the department. That seems a stretch.

There may be compelling reasons to appoint someone other than Summers, but his having said something dumb -- or at least unpopular -- once upon a time shouldn't be one of them.

According to Financial Times business commentator John Gapper, Summers is "genuinely an inventive and original thinker and there are precious few of those." No mention of people skills, but haven't we had enough of hiring people according to their beer-a-bility?

What say we call a moratorium on punitive measures for dumb things uttered while in the commission of "good stuff?"

Many would benefit from such a moratorium. A few that come to mind: Howard "Arrrrrggggggg!!!!!" Dean; John "I actually did vote for the $87 billion before I voted against it" Kerry; Andrew "He's (Bill Clinton's) probably gone with more black women than Barack" Young.

The stainless steel-tongued Joe Biden gets his own page. Make that a booklet.

Even Obama should get a pass for once saying he had campaigned in all 57 states with one to go, a mental detour interpreted by fevered minds on the right as proof that he's a secret Muslim. (There are -- aha! -- 57 member states in the Organization of the Islamic Conference.)

One small slip, repeated and amplified, can have serious consequences. A new Beliefnet.com exit poll found that half of McCain voters think Obama is or was a Muslim, with 32 percent saying, "He used to be Muslim and still has too many connections to Islam."

Although Republicans, led by the renowned neologist George W. Bush, are doubtless equally guilty of foot-in-mouth incursions (Trent Lott's infamous birthday paean to Strom Thurmond comes to mind), the GOP might benefit as much from an Adultery & Wide Stance Amnesty Act.

Given all the words uttered in the course of a presidential campaign, some are going to be screamingly funny; others ridiculous; some embarrassing and still others painful.

Covering all of the above, Biden, speaking to the Columbia, S.C., Rotary Club, all but boasted: "Hey, I'm from a slave state, too!"

Well, dang, Bubba, why didn't you say so in the first place?! At the risk of a too-brisk segue, sometimes intelligent, thoughtful, talented people simply step in it. And though some misstatements are too delicious to ignore, there really ought to be a point at which good outweighs bad; when smart outpaces stupid.

When even a screamer like Dean, who as Democratic National Committee chair rebuilt his party in all 57 states to run Republicans out of Washington last week, ought to be remembered best for the latter.

Make that all 50 states.

And give Summers a break.