The Ecstacy of Barack 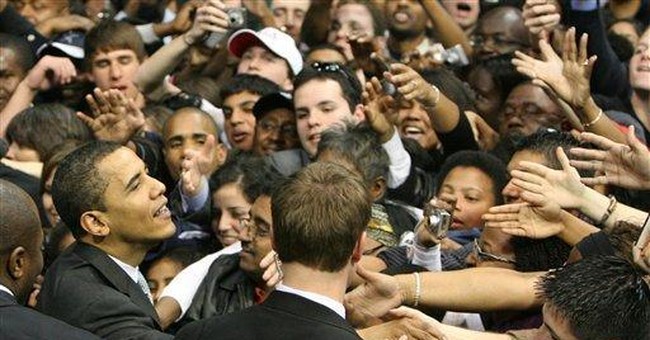 WASHINGTON -- Much has been made of the religious tenor of Barack Obama's presidential campaign.

Reports of women weeping and swooning -- even of an audience applauding when The One cleared his proboscis (blew his nose for you mortals) -- have become frequent events in the heavenly realm of Obi-Wan Obama.

His rhetoric, meanwhile, drips with hints of resurrection, redemption and second comings. "We are the ones we've been waiting for," he said on Super Tuesday night. And his people were glad.

Actually, they were hysterical, the word that best describes what surrounds this young savior and that may be more apt than we imagine. The word is derived from the Greek hystera, or womb. The ancient Greeks considered hysteria a psychoneurosis peculiar to women caused by disturbances of the uterus.

Well, you don't see any men fainting in Obi's presence.

Barack Obama has many appealing qualities, not least his own reluctance to be swaddled in purple. Nothing quite says, "I'm only human" like whipping out a hankie and blowing one's nose in front of 17,000 admirers. The audience's applause was reportedly awkward, as if the crowd was both approving of anything their savior did, but a little disappointed at this rather ungodly behavior.

So what is the source of this infatuation with Obama? How to explain the hysteria? The religious fervor? The devotion? The weeping and fainting and utter euphoria surrounding a candidate who had the audacity to run for leader of the free world on a platform of mere hope?

If anthropologists made predictions the way meteorologists do, they might have anticipated Obama's astronomical rise to supernova status in 2008 of the Common Era. Consider the cultural coordinates, and Obama's intersection with history becomes almost inevitable.

To play weatherman for a moment, he is a perfect storm of the culture of narcissism, the cult of celebrity, and a secular society in which fathers (both the holy and the secular) have been increasingly marginalized from the lives of a generation of young Americans.

All of these trends have been gaining momentum the past few decades. Social critic Christopher Lasch named the culture of narcissism a generation ago and cited addiction to celebrity as one of the disease's symptoms -- all tied to the decline of the family.

That culture has merely become more exaggerated as spiritual alienation and fatherlessness have collided with technology (YouTube, Facebook, MySpace, etc.) that enables the self-absorption of the narcissistic personality.

Grown-ups with decades under their double chins may have a variety of reasons for supporting Obama, but the youth who pack convention halls and stadiums as if for a rock concert constitute a tipping point of another order.

One of Obama's TV ads, set to rock 'n' roll, has a Woodstock feel to it. Text alternating with crowd scenes reads: "We Can Change The World" and "We Can Save The Planet."

Those are some kind of campaign promises. The kind no mortal could possibly keep, but never mind. Obi-Wan Obama is about hope -- and hope, he'll tell you, knows no limits.

It is thus no surprise that the young are enamored of Obama. He's a rock star. A telegenic, ultra-bright redeemer fluent in the planetary language of a cosmic generation. The force is with him.

But underpinning that popularity is something that transcends mere policy or politics. It is hunger, and that hunger is clearly spiritual. Human beings seem to have a yearning for the transcendent -- hence thousands of years of religion -- but we have lately shied away from traditional approaches and old gods.

Thus, in post-Judeo-Christian America, the sports club is the new church. Global warming is the new religion. Vegetarianism is the new sacrament. Hooking up, the new prayer. Talk therapy, the new witnessing. Tattooing and piercing, the new sacred symbols and rituals.

And apparently, Barack Obama is the new messiah.

Here's how a 20-year-old woman in Seattle described that Obama feeling: "When he was talking about hope, it actually almost made me cry. Like it really made sense, like, for the first, like, whoa ... "

This New Age glossolalia may be more sonorous than the guttural emanations from the revival tent, but the emotion is the same. It's all religion by any other name.

Whatever the Church of Obama promises, we should not mistake this movement for a renaissance of reason. It is more like, well, like whoa.