Joy Villa
|
Posted: Sep 23, 2020 11:06 AM
Share   Tweet
The opinions expressed by columnists are their own and do not necessarily represent the views of Townhall.com. 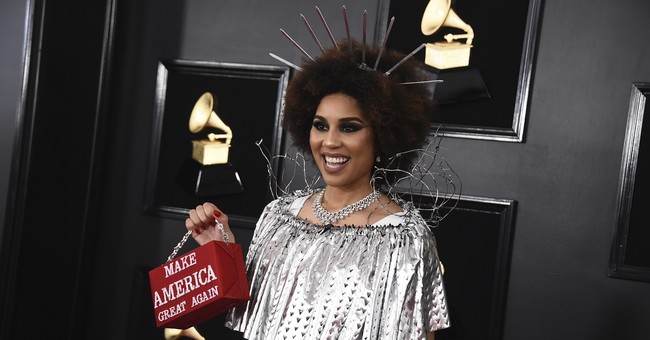 This week I received a crazy message on Facebook. A white leftist called me the N-word. I get bad messages like this often these days. But being Black was never a problem for me until I came out as conservative.

Right after I wore my first pro-Trump, pro-MAGA gown to the Grammys in early 2017, I received thousands of letters, emails, and social media messages calling me disgusting racial slurs. In addition to vilifying my Christian faith, people disparaged my color, bashed my political views, and threatened me and my family with physical harm—even death.

That was just the beginning of hate directed my way.

Last year, as I walked through an airport in the D.C. area wearing a Trump pin, an older white woman spat out at me, “Gross!” She said it right to my face. I felt her disgust like a dagger.

I felt unsafe in that moment—but I also knew I had to stand up to this. When I confronted the woman, she said she meant my pin. “Your Trump pin is gross,” she said. But she rushed to add that it was her “choice” to say whatever she wanted to say.

I told her, “You can disagree with someone’s politics, but it’s not OK to attack me and call me ‘gross.’” She needed to learn manners.

Today, an outrageous cancel culture has become all the rage—and a severe slice of it is directed at conservatives of color, or at anyone who dares in any way to depart from the liberal, leftist script. Black Americans, Hispanic Americans, Asian Americans, and anyone else of any color, race, or ethnicity who supports President Trump are treated immorally by members of the so-called “tolerant left.”

We are seen as people who can no longer be “controlled.” And that’s exactly what the leftist mob wants today—control.

I’m of mixed race and heritage. I’m proud of all parts of my background. On my mom’s side, I’m black and Choctaw Native-American. On my dad’s side, I’m Italian and Argentinian. My mixed background has helped shape my unique perspectives on politics, society, education, and black and Latin-American culture.

I’ve never felt the need to “choose” my race from among this mix, even though others have asked me repeatedly, “What are you?” They’ve said I “have to belong somewhere,” that I have to fit into a nice, round peg. I refuse to do that. As a result, they see me as a “freak.” Some people have said I’m “not white enough” to be considered white and that I’m “not black enough” to be considered black. Ridiculous.

I am proud of the person I am. And I love all of my people of all different colors and all different ethnicities from which I’m descended.

I don’t use my race as an excuse in any way for anything. No one else should, either. People need to take responsibility for their actions—and do what’s right for themselves, their families, their communities. They must reject the hate, violence, chaos and craziness that’s going on in too many cities in our great country right now.

It’s not easy being a conservative of color. But for all of us who are exercising our God-given, America-given right to say and do what we believe, I say: Remain steadfast. Stand up to whatever others throw at us. Stay positive in the face of negativity. And push forward with courage.

This article is adapted from Joy Villa’s new book, “Kickass Conservative!” (www.joyvilla.com). She is a #1 Billboard artist, actress, and conservative activist.