Trump's Parting Shot To China Should Be Full U.S. Recognition of Taiwan

Josh Hammer
|
Posted: Jan 15, 2021 12:01 AM
Share   Tweet
The opinions expressed by columnists are their own and do not necessarily represent the views of Townhall.com. 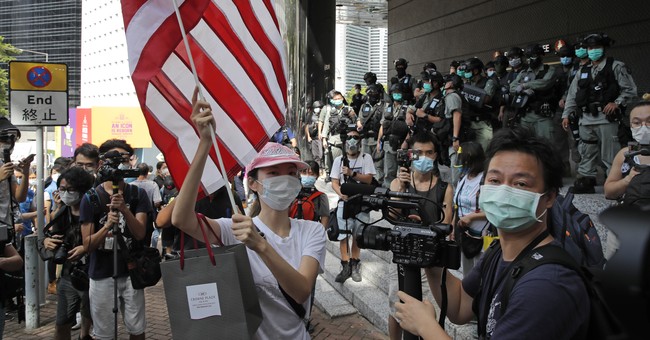 President Donald Trump's two greatest foreign policy accomplishments both involve departures from outmoded paradigms that had, for decades, enraptured bipartisan neoliberal elites: unprecedented Arab-Israeli rapprochement in the Middle East and an assertive China containment strategy in the Asia-Pacific. On the former front, Trump boldly departed from the misbegotten "inside-out" conflict resolution approach, which elevated to the forefront the need for Israeli capitulation to Palestinian-Arab intransigence; on the latter front, Trump became the first president since Richard Nixon's famous 1972 trip to China to openly call into question our relationship with that ascendant, hegemonic Communist regime.

The key difference is that, as Trump prepares to ride off into the sunset, progress on the latter is likely at greater risk of a prompt post-inauguration reversal from his Democratic successor. The physical moving of the U.S. embassy in Israel from Tel Aviv to Jerusalem, one of the Trump administration's myriad displays of staunch friendship with the Jewish state, is unlikely to be undone. Nor would any sane politician seek to nix the Abraham Accords, the series of landmark peace deals between Israel and Islamic nations that the administration helped negotiate. But pugnacious China-skeptical rhetoric, hardline opposition to Huawei's emergent 5G telecommunications network and harsh tariffs on Chinese imports are the sort of moves that would be all too easy for a longtime China dove such as Joe Biden to quickly reverse.

In order to help box in his successor and secure the continuity of our long-overdue recalibration with our preeminent 21st-century geopolitical threat, there is one farewell action above all that would stick in the craw of the Chinese Communist Party, or the CCP, and redound to America's substantive benefit. Trump ought to formally recognize Taiwan (also known as the Republic of China) as an independent state, distinct from the Beijing-based regime -- and he must do so, with all the diplomatic accoutrements such a formal recognition entails, posthaste.

There are few territorial disputes about which the CCP is more adamant than its insistence that both mainland China and Taiwan are part of a single, unified Chinese state -- with the Beijing-based People's Republic of China, or PRC, as the sole legitimate representative of that state. It has also been de facto, if not quite official, U.S. policy since the Jimmy Carter administration. As with most other Carter-era foreign policy initiatives that are remnants of a capitulatory Cold War posture, this stance is misguided and counterproductive: It is past time for the U.S. to formally repudiate the "one-China policy" and open an embassy in Taipei.

The one-China policy was predicated upon the belief that, through appeasement and economic liberalization, the PRC could become less authoritarian and ultimately better "integrated" into the much-ballyhooed "liberal world order." Whatever merit such an idea might have had as a theoretical musing has now been decisively disproven by history. The PRC under CCP General Secretary Xi Jinping is a rapacious hegemony that commits genocide against unwanted minorities, operates a nonpareil system of Orwellian state surveillance, steals intellectual property, commits predatory trade practices and unleashes deadly pandemics upon the world. Worse, that same much-lauded post-1972 economic liberalization has both made Americans complicit in CCP crimes against humanity -- think of Disney filming its recent "Mulan" film partially in Xinjiang, where a genuine genocide is currently unfolding against Uyghur Muslims -- and contributed to the hollowing out of our industrial base, the loss of mass blue-collar jobs and the concomitant proliferation of drug overdoses across the American heartland.

Trump had both the instinct and courage to change course. He can help solidify those gains by ending the one-China policy, converting the de facto embassy that is the American Institute in Taiwan into an official embassy, and formalizing all relevant diplomatic channels to the Taiwanese government. Taiwan is everything the PRC is not: It is a free market-oriented, pro-Western bastion that, with proper Western fortification, would do wonders to keep the People's Liberation Army at bay due to its strategic position. It would meaningfully deter Jinping's menacing "wolf warrior diplomacy" and help anchor a comprehensive China containment strategy spreading from South Korea and Japan through the Philippines and down all the way to Australia. And much like Trump's moving of the U.S. embassy in Israel from Tel Aviv to Jerusalem, a formal christening of an American embassy in Taipei is an action that would be politically difficult to undo.

Earlier this week, John Fund of National Review reported that many U.S. officials have been urging Trump to officially recognize Taiwan. It would be a fitting capstone to the first presidency in a half-century to recognize the PRC for the arch-foe that it is.