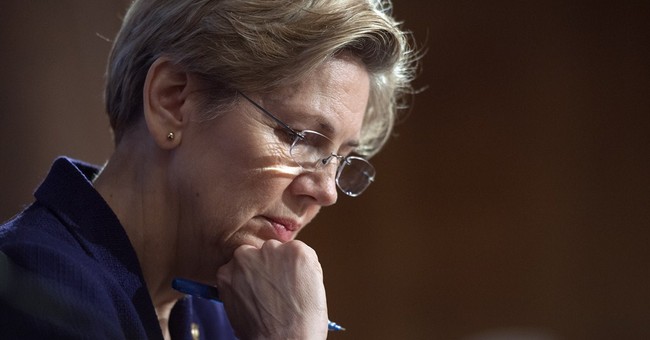 Paging Elizabeth Warren: This is your moment.

In 2007, Democrats were delirious with rage about the Iraq war. Hillary Clinton, the "inevitable" presidential front-runner, had voted for the war and refused to apologize for it. Other leading candidates, including Joe Biden, John Edwards and Chris Dodd, voted for it too. This left a huge opening for a credible antiwar candidate. Barack Obama, inexperienced and underqualified, nonetheless jumped into the vacuum. The rest, as they say, is history.

Today, the issue that obsesses the base of the Democratic Party is income inequality. I think that's foolish. The underlying causes of inequality -- miserable economic growth, stagnating wages, poverty, etc. -- are vastly more worthy challenges. Though, in fairness, many people actually have those problems in mind when they talk about inequality.

There's another component to the inequality obsession: populism. People increasingly feel that economic and political elites are enriching themselves, not by making great products or selling valuable services, but by cutting backroom deals and selling influence. This rage is remarkably bipartisan. It is the one theme that loosely unites tea partiers and Wall Street occupiers alike.

Sen. Warren owes her left-wing hero status to the Democratic version of this kind of populism. She's been talking for years about how the well-connected "rig the system" for their own benefit. Now, I find many of Warren's proposed solutions -- more regulation, more taxes, more government, etc. -- abhorrent. But, believe it or not, I am not a Democratic primary voter. Those who are love what Warren is selling.

Warren would be able to defuse Clinton's greatest asset (her gender) and exploit Clinton's greatest liability (her wealth and how she came by it) while in the process generating huge excitement from the status-quo-weary grass roots.

Start with gender. The Clinton team is reviving the ludicrous claim that opposition to her candidacy is sexist. (They tried that line on Team Obama in 2008, but Team Obama came back with insinuations of racism.) What fun it would be to watch the Clintons try to spin support for Warren as sexist.

Then there's Clinton's wealth. Ever since claiming she was "dead broke" when she and her husband left the White House, Clinton has been desperately trying to remove her feet from her mouth.

In a recent interview with The Guardian, Clinton claimed that she's on the right side of the inequality argument because of the way she earned her money. The American people "don't see me as part of the problem," she explained, "because we pay ordinary income tax, unlike a lot of people who are truly well off, not to name names; and we've done it through dint of hard work."

Many think this was a shot at Mitt Romney, and if it was, it's pretty pathetic. But even if Democrats think it's a serious argument, Romney will not be running in the Democratic primary -- unlike Clinton (presumably).

Clinton made her money by giving $200,000 speeches to corporate fat cats and trading on her connections. She may think that making millions for boring books and flying around in rented private jets to give really boring speeches is a fair wage for fair work. Heck, maybe it is! But she simply lacks the political talent to sell that interpretation.

Seen through today's populist prism, Clinton's record is a target-rich environment. For instance, in 1978, as a young associate at the Rose Law Firm and as wife of the attorney general and soon-to-be governor of Arkansas, Clinton sought the help of Tyson Food executive James Blair. Blair and Clinton's shady commodities broker, Robert "Red" Bone (a former Tyson executive), managed to help Clinton turn a $1,000 investment into a $100,000 profit in an extremely dubious series of cattle-futures transactions. A paper for the Journal of Economics and Finance found that the odds she earned that return in a straightforward manner were 31 trillion to 1. No one has proven anything criminal, but most journalists and experts agreed that she had to have gotten "special treatment" (USA Today's words).