It's Time for Obama to Look At Terrorism Differently 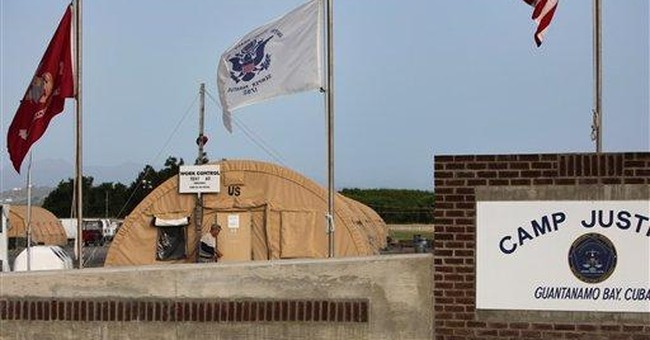 It is always dangerous to mistake your ideological preferences for shrewd political strategy, but that is precisely what President Obama and his advisors have done with the war on terror.

On the right, the prevailing critique of the president's approach to the war on terror is that it is both deeply ideological and unserious. Obama remains fixated on the idea of closing Guantanamo, even if it means keeping irredeemable terrorists in U.S. prisons indefinitely. The administration initially banned the use of the term "war on terror," preferring the ridiculous bureaucratese "overseas contingency operations." Homeland Security Secretary Janet Napolitano favors "man-caused disasters" to describe 9/11-style terrorism. Attorney General Eric Holder has decided to send self-professed 9/11 mastermind Khalid Shaikh Mohammed and four others to a civilian trial in New York City, allegedly without consulting anyone save his wife and brother.

Immediately after the Fort Hood shootings and again after the foiled Christmas Day attack by suspect Umar Farouk Abdulmutallab, the president's initial response was to look at the incidents through the now-familiar ideological prism. These were "isolated" attacks from individual "extremists."

Admirably, Obama was quick to correct the record about Abdulmutallab, contradicting Napolitano's initial contention that "the system worked." Rather, Obama admitted there was "systemic failure." Since then, the media have reported that Abdulmutallab's arrest and interrogation were as flawed as the system that let him on the plane. FBI agents interviewed the jihadist for 50 minutes, according to the Associated Press, before he was read his Miranda rights and lawyered up, and no one even bothered to consult with Obama's national security team.

Meanwhile, pro-Obama pundits have been rolling out a revealing argument: Terrorism happens; get over it. For instance, Time's Peter Beinart and Newsweek's Fareed Zakaria argue that the American response to the Christmas Day bomber was "hysteria" or "panic." Both say that the threat from al-Qaida is overblown and distracts us from smart policies and more important priorities.

Whatever the merits of these arguments and Obama's responses, one thing is becoming clear: They amount to awful politics. One of Scott Brown's biggest applause lines leading up to the Massachusetts special election last week to fill Ted Kennedy's Senate seat was that "in dealing with terrorists, our tax dollars should pay for weapons to stop them, not lawyers to defend them."

"People talk about the potency of the health-care issue," Brown's political strategist, Eric Fehrnstrom, told National Review, "but from our own internal polling, the more potent issue here in Massachusetts was terrorism and the treatment of enemy combatants."

Indeed, after years of debate over the tactic, a Rasmussen poll found that 58 percent of Americans favored waterboarding Abdulmutallab to get intelligence.

Of course, if the Obama administration's reluctance to treat terrorists like enemies is derived entirely from deep-seated ideological principle, then it should stick to its guns. But couldn't some of the reluctance be a holdover from the politics of the George W. Bush years? The Democrats came into power believing that downplaying and downgrading the war on terror was both right and politically smart. The former is debatable, the latter unsupportable.

Overseas, Obama doubled down in Afghanistan and has lobbed more Predator drones at al-Qaida than Bush did. His base didn't like it, but it was nonetheless both right and politically shrewd. The White House insists that it is not ideological but pragmatic, and yet it clings to an ideological nostrum that hawkishness on terrorism is not only atavistic but at odds with a progressive agenda at home.

The British empire destroyed Thuggee terrorism in India in the 1830s. (The Thuggees may have killed 1 million people.) But the war on Thuggeeism hardly dominated British politics. Bill Clinton initiated "extraordinary rendition" without any serious political blowback or distraction (in part because it was largely kept secret). LBJ's Great Society and civil rights victories coincided with escalation in Vietnam. And let us not forget that domestic spending skyrocketed under Bush even as he prosecuted the war on terror.

Purely partisan conservatives should hope that Obama continues to see the war on terror through the same lens he's used for the last year. But it would be better for America -- and Obama -- if he saw the light.