Reading Between the Lines of Obama's Poetry 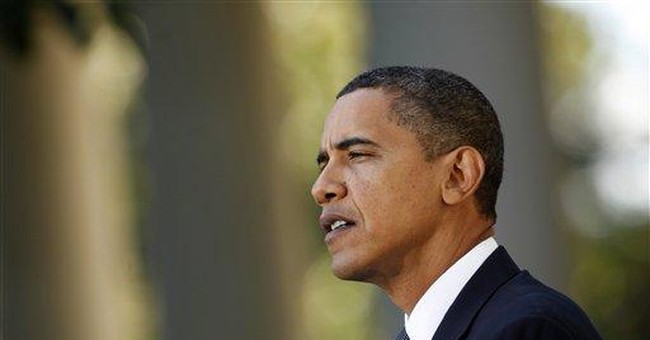 Irving Kristol took Wilde's observation and ran with it. "The amateur's feelings are sincere enough -- why else should he be writing poetry? -- but he takes the writing of poetry to be more important than the poem itself," Kristol noted in his influential 1972 essay, "Symbolic Politics and Liberal Reform." "For him, writing poetry is a kind of symbolic action, in which he liberates his most earnest sentiments, and it is in this impatient action and in this instant liberation that he seeks fulfillment."

The successful poet, meanwhile, understands that good poetry is ultimately not about the experience of the author but of the reader. "He understands that a plea of sincerity is of no account in the ultimate court of literary judgment, which will look at the poem itself and simply ask: Does it work?

"It seems to me," Kristol wrote, "that the politics of liberal reform, in recent years, shows many of the same characteristics as amateur poetry. It has been more concerned with the kind of symbolic action that gratifies the passions of the reformer than with the efficacy of the reforms themselves."

Kristol -- who died last month, prompting me to reread him -- dubbed this heart-on-your-sleeve approach the "New Politics," and he lamented that it had taken over the Democratic Party.

For Kristol, the "outstanding characteristic" of the New Politics was its "insistence on the overwhelming importance of revealing, in the public realm, one's intense feelings -- we must 'care,' we must 'be concerned,' we must be 'committed.' Unsurprisingly, this goes along with an immense indifference to consequences."

During the 1990s, Bill Clinton represented the high-water mark of the New Politics. Clinton bit his lip, rheumied up his eyes on cue and conveyed a warm fog of empathy wherever he went. If in trouble, his first instinct wasn't to defend results but to testify about how he'd been "working so hard."

In 2000, his wife Hillary one-upped him as a master of the New Politics, winning a Senate seat as a carpetbagger by telling New Yorkers the only issue in the race was which candidate would be most concerned about the issues that concern New Yorkers.

That same year, the New Politics became bipartisan. Contrary to claims from both its left-wing critics and right-wing fans, George W. Bush's "compassionate conservatism" was not an alternative to Clinton's feel-your-pain liberalism; it was a Republican version of it. Unlike his father, W. was obsessed with convincing voters, particularly swing voters, that he cared, that he was a "different kind of conservative." When somebody hurts, he said, government has to move. By the end of his presidency, compassionate conservatism was in tatters. The left couldn't spot any compassion; the right couldn't identify much conservatism.

But Bush succeeded in conjuring forth the greatest expression of the New Politics in living memory: Barack Obama. One thing was clear about Obama's candidacy: It was all about the poetry of "genuine feeling." He may have been cool and aloof, but supporting him was a statement of passion, of self-image. He made supporters feel good about themselves. "We are the ones we've been waiting for," he said. "We are the change that we seek."

Obama insisted that his rhetoric wasn't "just words" but something greater, more profound -- certainly not the "bad poetry" that Wilde and Kristol attacked. But it was hard to find the substance. "What's troubling about the campaign," warned liberal historian Sean Wilentz, "is that it's gone beyond hope and change to redemption."

The campaign officially ended last November, but Obama has spent much of his presidency acting as if he hadn't gotten the news. The problem is that Obama's New Politics approach is great for a presidential campaign, and it can even work for a presidency -- when times are going well, as they were in the 1990s. But when times are tough, as they are now, Americans want decisions, action, progress.

That is certainly the case for the president's own political base, which seemed almost as annoyed with his Nobel Peace Prize as his opponents did. They want to stop celebrating his potential and start celebrating his accomplishments -- which means getting something more concrete than words on health care, jobs, the war and, increasingly, gay rights. And if that spells the end of "New Politics," good riddance.

Obama's feelings are sincere and genuine, as Wilde and Kristol would say. But we are at the point at which the gifted poet must distinguish himself from the amateur. Is the poetry a means to an actual end? Or is it all there is?