'No' To Obama's Experimental Government 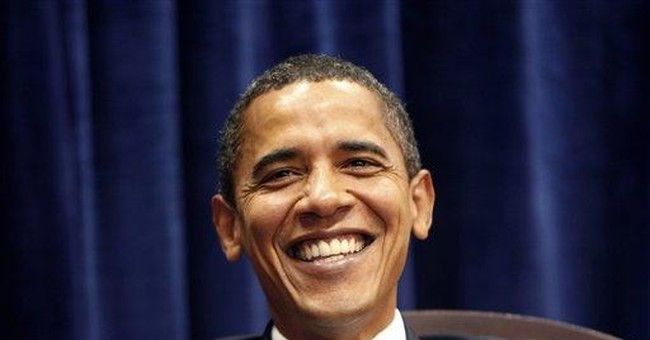 On Sunday night, President-elect Barack Obama told "60 Minutes" that Franklin D. Roosevelt would be a model of sorts for him. "What you see in FDR that I hope my team can emulate is not always getting it right, but projecting a sense of confidence and a willingness to try things and experiment in order to get people working again."

This is a problematic standard. What do you want in a surgeon? One who "gets it right" or one who projects "a sense of confidence?" Ditto accountants, defense lawyers, mechanics and bomb-disposal technicians: cocky and self-assured, or gets it right?

Before you answer that, please ask yourself what your point of view on this question was during the eight years of the Bush administration.

In short, there can be a chasm between being right and merely appearing to be right. Why anyone stakes greater value on the appearance than reality is a mystery to me.

But as Obama clearly recognizes, that was a big part of the FDR magic. FDR came into office promising "bold, persistent experimentation" -- and delivered. Raymond Moley, an early member of FDR's "brain trust," saw the New Deal for what it was. "To look upon these programs as the result of a unified plan was to believe that the accumulation of stuffed snakes, baseball pictures, school flags, old tennis shoes, carpenter's tools, geometry books and chemistry sets in a boy's bedroom could have been put there by an interior decorator," Moley wrote later.

Yet Americans thought it was all part of a plan, even though experimentation and planning are in fact near opposites. Why? Because FDR always projected such confidence, even as he made things worse. But this isn't another column about how FDR prolonged the Depression. Been there, done that. I'd rather be forward-looking.

In fact, I want to be experimental, too. So here's my idea: Just stop.

Stop talking about bailouts and stimuli. Stop pondering ever more drastic action. Give it a rest. Let it be.

One of the main reasons there's all of this "money on the sidelines" out there among private investors is that Wall Street doesn't know what the government will do next. Will it bail out the auto industry? The insurance companies? Which taxes will go up? How far will interest rates go down? How long will the federal government own stakes in the banks? Will more stimulus checks go out? If so, how big will the deficit get?

Interventionists, bailout czars and "bold experimenters" in all parties claim to be like firefighters; they can't stop what they're doing until the fire is out. But this analogy only works if you understand the nature of the fire. If it's a credit crisis, that's one thing. If it's uncertainty, it's quite another.

And if the problem right now is uncertainty, then these aren't firefighters, they're arsonists.

Treasury Secretary Henry Paulson told Congress he'd spend his kitty of tax dollars on bad mortgage-backed securities. Instead, in the spirit of bold experimentation, he's spent much of it to date buying banks.

Obama insisted he had a specific plan for the economy -- but his plan seems to be to "project confidence."

The problem with this "In Obama We Trust" approach is that it makes private-sector decision-making very difficult. If your boss says he will lay off half his employees next month, but he doesn't know who yet, will you buy a new house this month?

In a time of stability and growth, government can afford bold, persistent experimentation. But in a time of uncertainty, the last thing it needs is more uncertainty. Yet Obama's confident pragmatism, like FDR's, is a threat to confidence where it matters -- among consumers, credit markets and investors.

The engine company in Washington has pumped more than a trillion dollars through the fire hose. It's time to turn off the spigot, not only to see where we are but to let the normal people start fixing things.

By all means, let's hope President Obama will project confidence. But maybe he should express less confidence in the government's ability to get people working again, and more in the ability of regular Americans to rise from the ashes of any hardship. In short, don't just do something, President Obama, stand there.