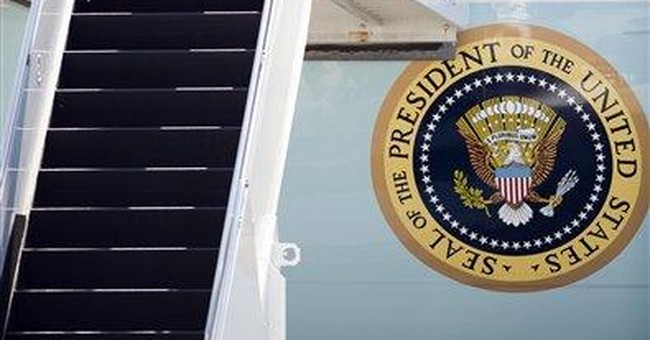 How do you make a dreadfully bad piece of legislation -- the nearly $900-billion so-called "stimulus" bill -- worse? Simple -- add protectionism.

The "Buy American" provision of the stimulus bill, which mandates the use of domestic iron, steel and manufactured goods even if imports are cheaper, makes our trading partners nervous. That created a problem for President Obama: "I think it would be a mistake ... at a time when worldwide trade is declining for us to start sending a message that somehow we're just looking after ourselves and not concerned with world trade," he said.

But some members of his party were elected on protectionist platforms, and they are not about to blow this chance to reward their union and industrial constituencies. What was Obama to do?

He did what old-style politicians always do: tried to have it both ways by resorting to vague rhetoric. He said he'd "see what kind of language we can work on this issue."

The Senate then added a line saying that the "Buy American" section must be "applied in a manner consistent with U.S. obligations under international agreements."

So is the bill protectionist or not? It sounds as though our trade agreements must be respected, but as The New York Times noted, "[I]n many cases it [a "Buy American" provision] is not considered a violation of trade treaties." Public Citizen's protectionist website, Eyes on Trade, agrees: Under its trade agreements, the United States has "always been allowed to do most if not all of what is in the stimulus package."

As long as it remains in the bill, the "Buy American" section will haunt us. Protectionism is poison. Prosperity means having access to the least expensive goods the world has to offer. When we save money buying something cheaper from abroad, we have more money to spend on other things or to invest. Laws that force us to pay more for things cannot make us wealthier.

Protectionist unions and firms say that a "Buy American" policy creates jobs at home. But that is misleading, because while protectionism does save some American jobs -- often temporarily -- the policy also destroys jobs at home.

It destroys jobs in two ways. First, when foreigners lose sales here, they have fewer dollars with which to buy American exports or to invest in the U.S. economy. Jobs in the export sector disappear, and the jobs that would have been created through the new investment won't be created.

Second, when foreign nations retaliate against American exporters, even more jobs are destroyed.

"Buy American" is a dishonest slogan because it leads to a loss of American opportunities for prosperity. It is special-interest legislation that is paid for dearly by other Americans. As my first college economics professor, Burton G. Malkiel, wrote in The Wall Street Journal last week, "Beggar-thy-neighbor policies create more beggars and hostile neighbors."

The alleged "stimulus" bill is a rotten idea to begin with. Government has no resources that it hasn't first taken from someone else. By borrowing $800 billion to pay for pet political projects, government prevents that money from being used to rebuild the economy according to consumer preferences. Bad stimulus drives out good.

Protectionism makes it even worse, and we should know better. In 1929-30, President Herbert Hoover and the U.S. Congress helped turn a depression into the Great Depression by enacting the infamous Smoot-Hawley tariff. Hoover's mere announcement that he would sign the bill pushed the stock market into the tank. Hoover and Congress then made their bad tariff decision worse by approving a "Buy America Act," which required federal projects to use only American supplies. Hoover signed it on his last day in office. Countries the world over retaliated, and by 1932, U.S. exports had fallen 64 percent, aggravating unemployment, which approached 25 percent.

The effects of the "Buy American" provision of the "stimulus" bill may not be as egregious, but who knows?

What we do know is that many of our so-called leaders have learned nothing from history.