What the "War" on Whatever is Really About 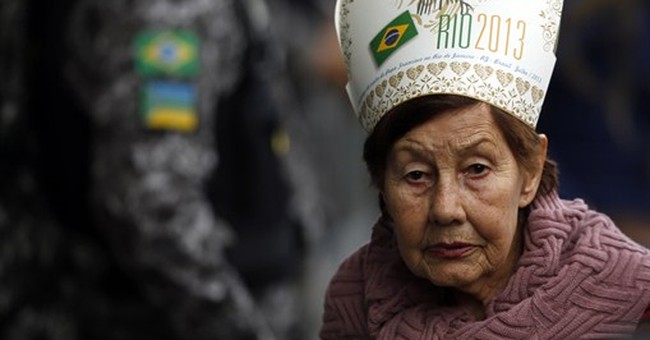 Every time our culture passes gas sideways, liberals love to trot out the theory of “income inequality” as the culprit behind it.

From the modern theory of “bullying,” to global warming, to breast cancer, to riots in Sweden, France, or the disappearance of the arctic ice shelf, income inequality looms large in liberal cosmology.

At a time when more people in the history of world have become upwardly-mobile, solid members of the middle-class, liberals believe that they must stop the natural process by which people are moved out of poverty in favor of some sort of state-sponsored program that ensures “fairness.”

Participants in the annual World Economic Forum summit in Davos, Switzerland are citing worldwide income inequality as a problem that needs immediate attention, according to multiple reports. The political, cultural and business leaders convening in Switzerland this week are the latest group to express pointed concern over the growing gulf between the planet's richest and poorest citizens.

Several of the wealthiest Davos attendees have told the press that they believe the current lopsided distribution of wealth is unsustainable -- that the "global social-economic order will change, if we want it or not," in the words of one industrialist quoted in Bloomberg.

It's not just them. The Forum's annual Global Risks report names "severe income disparity" as the issue most likely to affect the world over the next 10 years. And a poll of Davos participants conducted by Bloomberg News found that more than half believe income inequality is bad for economic growth -- a conclusion also reached by the International Monetary Fund last year.

About two-thirds believe governments should take active steps to address the issue, the survey also found.

The Davos summit, taking place this week, comes after nearly a year of international protests inspired by a lack of economic opportunities, from Tahrir Square to Zuccotti Park, and on the heels of numerous studies showing much of the world's population struggling with deprivation.

3)  Rich people and government types- our betters- agree on this.

4)  We must do something about it immediately.

And whatever else they are saying, they mean for you to pay for it.

Obama even had the "audacity" to suggest to young Africans that they can't aspire to have big homes, cars or even air conditioning.


You see, “Income inequality” means something different in Egypt than it does in Sweden or the U.S, even though liberals would have what happened in Tahrir Square versus what happened in Zuccotti Park was part of the same phenomenon.

Much of the hype about income inequality in the Western world is more about the changing dynamics of society and the make-up of households than it is about income.

While noting that 40 percent of all households now have either a woman earning more than a man or a woman as sole provider, the study also says there is a huge difference between married households and single mother households.

“The income gap between the two groups is quite large,” says Pew. “The median total family income of married mothers who earn more than their husbands was nearly $80,000 in 2011, well above the national median of $57,100 for all families with children, and nearly four times the $23,000 median for families led by a single mother.”

The only people surprised by the finding are liberals.

As our contributor at Political Calculations wrote back in October of 2011:

The same holds true for the opposite end of the income earning spectrum. If people with really low income earning potential join together to form families and households, or perhaps if they choose to split apart, and increasingly do so over time, then the resulting low income family and household will also make income inequality among families and households rise, even though there has been no real change in the amount of actual income inequality among individuals.

Liberals are getting wise to the argument that maybe people who get married and stay married do better than ones who don’t. And it worries them. This is just the type of argument that conservatives will use to bolster the traditional family unit that has been around for 7,000 years of recorded history.

So to combat this kind of nonsense progressives trot out their old standby, a liberal academic expert in some new science, to lets us know that all is not as it seems: “Stephanie Coontz, who teaches history and family studies at The Evergreen State College,” reports NPR, “says women know they'll be better off if they marry a man who earns a good wage, but they may not have that option.”

NPR doesn’t even bother to cite any statistics beside professor Coontz assertion that high school graduates make $4.00 per hour less in constant dollars than they did in 1979- a statement for which I can find no evidence.

"In many low-income communities, there are not many men like that available," says Coontz of good wage-earning men. "Poverty is as often a cause of unwed motherhood as it is a result."

So now it’s poverty that’s stopping people from being married, not a liberal ideology that is hostile to marriage in general. What are you gonna believe? 7,000 years of use and tradition, or Ms. Coontz and her liberal betters who teach modified home economics on the side?

“Whenever someone expresses moral disapproval in a legal context,” says U.S. Supreme Court Justice Elena Kagan in regards to the only type of marriage liberals approve of- that is gay marriage- “the red flag of discrimination goes up for me.”

But here is the punchline that liberals are getting at: People who stay married- presumably to spouses of the opposite gender- and reap the benefits of their commitment need to pay for those who can’t or won’t.

“US children in single mother families have a poverty rate of 63 percent when only parental earnings are considered,” says the Nation, “comparable to the 61 percent average for children in single mother families in other high-income countries. But when transfer payments are included—such as a government child allowance, unemployment insurance and other assistance programs—the US rate only declines to 51 percent, while the peer countries average poverty rate falls all the way down to 27 percent.”

We need, it seems, to follow the European model, because, yeah, that’s working out so well right now.

Just ask Ms. Coontz. She has a Masters in European History.

Her class American Families: Historical and Sociological Perspectives studies “the gender and sexual norms of the 19th century, including variation by race and class, then examine the changes pioneered in the early 20th century. We discuss the rise of the 1950s male breadwinner family and then follow its demise from the 1960s through the 1980s. We end the quarter by discussing new patterns of partnering and parenting in the past 30 years.”

The class runs from 9 AM to 5 PM on Saturdays. It is offered for part-time credit only, because, yeah, it seems like it’s working out real well right now.