John Nantz
|
Posted: Jul 04, 2016 12:01 AM
Share   Tweet
The opinions expressed by columnists are their own and do not necessarily represent the views of Townhall.com. 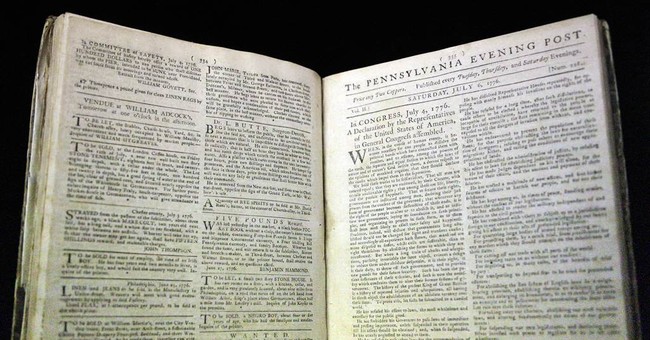 The Fourth of July, for most Americans, is a day filled with the comforts that a youthful summer eagerly supplies in golden hues and generous heat. New flags flash proudly with crisp red and white stripes--beaming stars on a field of blue; an undulating, living object caught and writhing between the playful fingers of summer's capricious breeze. Kids bound outdoors filled with the giggling beams of the sun's boiling disc and tantalized by the sizzling, uniquely American delicacies cooking on dad's carefully stoked charcoal grill. But, all of this summer glee exists because of ancient parchment dry as an autumn oak leaf.

Holidays are a fine thing, so long as we are jarred from our slumber to wake, however briefly, to the glories of a priceless inheritance passed like a baton from one generation to the next. Independence Day usually culminates in spectacular firework shows that harken back to an era when life and limb were fodder to the thundering machinery of mad King George's tyranny. Liberty's dead call us to remember and pass the sacred totem, hollowed by their patriot's blood, a talisman against tyranny, written on 18th century parchment.

The Declaration of Independence is a quick read. Even if you're a slow reader, you should be able to conquer it in 15 minutes. It can be read in its entirety before a hotdog chars on the grill. In fact, the first few paragraphs distill genius and divine revelation to produce a wonder in succinct complexity. The Founding Fathers knew this document would hang over their heads like the Sword of Damocles and would define them for all posterity. So, they chose every word with meticulous care.

Take the time to read it. It is the essence of our body politic and to the degree we are unmoored from this sheltering harbor we are ever in danger of falling prey to the savagery of tyrannical seas. If you don't have a copy, avail yourself of the wonders of Google.

But, if you're really pressed for time, consider this crucial sentence found in the second paragraph of The Declaration of Independence:

“We hold these truths to be self-evident, that all men are created equal, that they are endowed by their Creator with certain unalienable Rights, that among these are Life, Liberty, and the pursuit of Happiness."

The Declaration is a political treatise as spectacular as any kingly diadem and it's easy to miss the brilliance of a precious gem when it's couched in so much splendor. The linchpin of every liberty is described within the span of four words, "endowed by their Creator." Millennia of philosophizing failed to discover what theologians extrapolated from Divine revelation. For Greek and Roman citizens, their rights existed only to the degree and extent to which the government applied them. In other words, the source of human rights was the state. Greece and Rome created civil rights in the image of man, producing only tyranny for most, and merely the illusion of democracy.

The Bible says, "where the Spirit of the Lord is, there is liberty." (2 Corinthians 3:17) And so, true civil rights awaited the day that men turned to the counsel of God to understand themselves in the light of His truth. Being made in the image of God, we are imbued with intrinsic value and rights adhere to us as creations bearing God's image. These rights are "unalienable," meaning we cannot divest ourselves of those rights even by our own volition, just as we cannot completely efface the stamp of God's image on us.

Therefore, the rights that are cited in the Declaration, by way of example, are only properly exercised in the context of their Divine origin. Life can only be lived with purpose and joy insomuch as it is lived in His service. Liberty can only be properly enjoyed as it is bounded by the laws of nature and of nature's God. The pursuit of happiness can only be achieved in pursuit of righteousness--the foundation of real joy. These truths are the essence of the civil society which must exist for a democratic republic to function.

Sadly, the left knows this better than most conservatives. And, this is why the left constantly erodes the pillars of the civil society. Their work is insidious and relentless as they gnaw like termites at the family, church, and education. Life, in their leprous grasp, becomes irrelevant before consuming desire. Liberty is corrupted into license as liberalism extinguishes the guiding light of God's truth. And the pursuit of happiness is transformed into the all consuming abyss of unfettered desire.

There is so much more in our Declaration of Independence. Our celebrations have meaning if we take the time to read the document that is the occasion for the holiday. While the coals burn low, read with thoughtfulness the lines that our forefathers penned with so much care--to which they pledged their lives and wealth. Their legacy is dissipating as the minions of darkness bend the arc of history toward tyranny, cloaking their treachery in Orwellian truth speak and enslaving our posterity in service to a glib equality and reckless liberty.