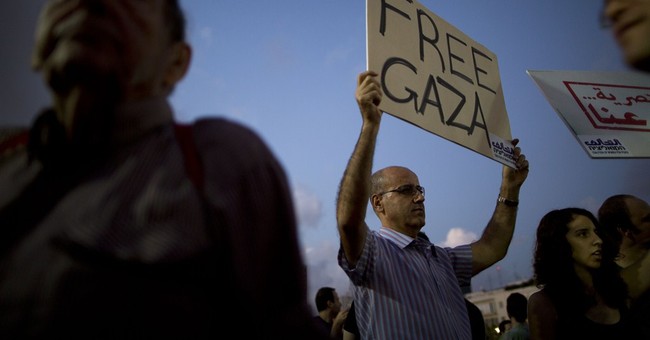 The Hamas propaganda machine is running full throttle, pumping out disinformation faster than their murderous barrage of indiscriminate missiles, tunneling like grubs into the psyche of the unsuspecting. Their fellow travelers and supporters in the establishment media are all too happy to carry Hamas' corpse-laden water.

Worse still are the useful idiots in our own government who parrot the terrorist narrative without so much as a moments reflection. Recently, the addled Nancy Pelosi mouthed what she'd been fed by the Qataris, claiming that "Hamas is a humanitarian organization." Simply astounding. Israel was most recently provoked by Hamas’ kidnapping of three Israeli teenagers who were shot and then buried in shallow graves. This atrocity was committed amid a constant barrage of rockets launched from Gaza, a Hamas stronghold. Yet Pelosi, in her dotage, mutters inanely about the nature of Hamas and continues to be taken seriously on networks such as CNN. Sadly, Pelosi is only one of a dissonant chorus of professional cacklers singing Hamas’ praise.

Not to be outdone by the dysfunctional Pelosi, Hillary Rodham Clinton weighed in for the professional pant-suit class. During an interview with Jorge Ramos, Hillary exercised her renowned powers of foreign policy analysis and produced a dazzlingly stupid assessment of the current conflict in Gaza. Hillary opined that rocket batteries were placed among Palestinian children because Gaza is “pretty small.” Apparently, Hillary subscribes to the Kim Kardashian doctrine on Mid-East conflict resolution. With such finely honed powers of deductive reasoning, it's no wonder that Hillary concluded that the Benghazi terrorist attack occurred spontaneously and not coincidentally on the anniversary of 9/11. She's the walking embodiment of the liberal dogma that intention always trumps capability or outcome.

For serious, thoughtful people, the idiocy of the Left comes as no surprise. What is surprising are comments from the Right calling into question the legitimacy of Israel's response in Gaza. Social media is rife with the sophomoric. There, it is especially true that many know just enough to be dangerous.

For some, Israel overreaches in Gaza because it is rightly a Palestinian enclave and Hamas has been provoked. Historically, the Israeli claim to Palestine is incontrovertible since it is carefully documented in Biblical literature. In some quarters it's fashionable to disregard Biblical accounts with regard to Israel's territorial claims. However, historical accounts in the Biblical record are a trusted and unimpeached source of reference for archeological science. Therefore, disregarding Biblical history is analogous to rejecting Gibbon’s The History of the Decline and Fall of the Roman Empire or Plutarch’s Lives of the Noble Greeks and Romans. We would know nothing of King Leonidas and his 300 if not for the writings of Herodotus. Yet, the Biblical record exceeds the ancient historians in forensic integrity and detail.

For a Christian, to reject the Biblical narrative and Israel's historical claim to Palestine is to risk the stigma of heretic. The Cannon of Scripture is a Christian's rule for faith and practice and to trivialize its historical claims is to call into question one's citizenship in The Kingdom Of God. Even secularists accept the Bible as accurate with regard to its historical record. The Biblically prescribed boundaries, which encompass Gaza and the West Bank, have been addressed in a previous column.

Claims that Hamas has been provoked into acts of animalistic violence are absurd in the extreme. Israel has comported itself in model fashion as an occupying force and has scrupulously observed the Geneva Convention in its treatment of Palestinians. In accordance with international norms, Israel does not grant Palestinians the same access to its judicial system and democratic processes simply because to do so would imply a grant of citizenship. Simply put, Palestinians are occupying reacquired territories and must submit to Israeli standards of immigration and naturalization or remain subject to Israeli Defense Forces (IDF) military courts. IDF forces continue to adhere to stringent rules of engagement that include warning Palestinian citizens of impending military action. Still, depraved Hamas operatives entice civilians to occupy areas of military importance while they skulk back to their fetid dens and seal the fate of innocents.

Most recently, the Obama administration has played the idiot for Hamas by condemning an IDF response to credible information regarding the location of a rocket battery. In textbook Hamas fashion, the rocket battery was concealed in a United Nations school. IDF forces responded to neutralize the threat killing 15 civilians who were used as human shields by the monstrous Hamas.

In warfare, you have to choose a side. Equivocation results in death and defeat. Obviously, Hamas cannot hope to defeat IDF forces in open battle, so they inflict as much human carnage as possible and attempt to beguile the superficial with silly notions of provocation. Hamas is provoked by Israel in the same way that the 9/11 terrorists were provoked to murder thousands of people in the Twin Towers. The provocation is that Israel and America exist, that we enjoy liberty, and that we refuse to submit to the devilish doctrines of their rabid Mullahs.