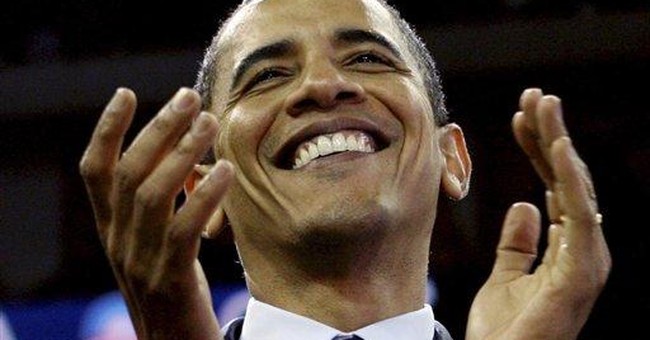 Does it surprise anybody that the latest word to enter the English language is 'obama' in its many variations?

"The word is derived from the name Obama Barack, the senator from Illinois and a top contender for the Democratic nomination for the U.S. presidency," notes the Global Language Monitor (GLM), which tracks the growth and evolution of the English language around the globe.

And the list is growing, according to Paul JJ Payack, GLM's president and chief word analyst.

"To enter the English language, a word has to meet certain criteria, including frequency of appearance in the written and spoken language, in the media, have a large geographic footprint, and to stand the test of time," he points out. "In the past, this process would unfold over many years, even decades or centuries. However, the Internet, with instant global communication to billions of people has radically accelerated the cycle."

He adds that several other names have made the leap into language, including "OK," which is short for "Old Kinderhook," the nickname given to President Martin Van Buren, who was born in Kinderhook, N.Y.; as well as Caesarean section, after Julius Caesar.

It's not every day that Congress calls on the Pentagon, the U.S. Geological Survey (USGS), and the National Science Foundation to kick off a joint mission, but the expertise of all three government agencies could come in handy when digging 165 feet into the Antarctica ice to recover the remains of three naval aviators.

It was on Dec. 30, 1946, says Rep. Mark Steven Kirk, Illinois Republican, who has just introduced a resolution to bring the U.S. aviators home, that a Navy aircraft participating in Operation Highjump crashed over Antarctica, killing three of the nine on board.

Among those killed in the crash of the "George One," as the seaplane was known, was radioman Wendell Hendersin, the brother of one of the congressman's constituents, Betty Jean Spencer, of Mundelein, Ill.

"Along with the other casualties, Hendersin was buried in a common grave near the crash site. Although the survivors held a small service, Hendersin never received a proper burial," Mr. Kirk notes. "After two weeks stranded on the ice, the survivors were rescued, but the remains of the three Americans were never recovered."

The congressman recalls that while servicemembers killed overseas at that time were usually buried abroad, in the 61 years that have passed, Defense Department policy has changed "and technology now makes a recovery operation likely to succeed at lower risk."

It was the USGS that determined the location of the "George One," estimating the wreckage has sunk to an icy depth of 165 feet. The other victims in the frozen grave are Fred Williams and Maxwell Lopez.

Writing last summer in the Smithsonian's Air & Space magazine, Carl Hoffman mentioned that Hendersin's mother had requested a grave for her son at Arlington National Cemetery, but she was turned down by the Navy. So the family instead held a memorial service in Wisconsin, "but with no body to bury, they placed no headstone to mark a grave."

Meanwhile, Williams' family in Clarksburg, Tenn., decided against holding a service. "It was just too painful. Nobody talked about it," Williams' 70-year-old niece, Kate Williams Beebe, was quoted as saying. "It was like a closed door. Grandma and Granddaddy wanted his body back, but they knew he wouldn't be returning."

Lopez's family did hold a memorial service in Rhode Island in 1947, according to the aviator's 42-year-old nephew, Ted Lopez, who keeps his uncle's scrapbook that contains the Western Union telegram informing the family of his death. Mr. Lopez, interestingly enough, is the Smithsonian's Air & Space magazine graphic designer.

We had to laugh at yesterday's official White House pool report surrounding President Bush's travels in the African country of Ghana, which stated "the screeching you may have heard from the press conference apparently came from peacocks."