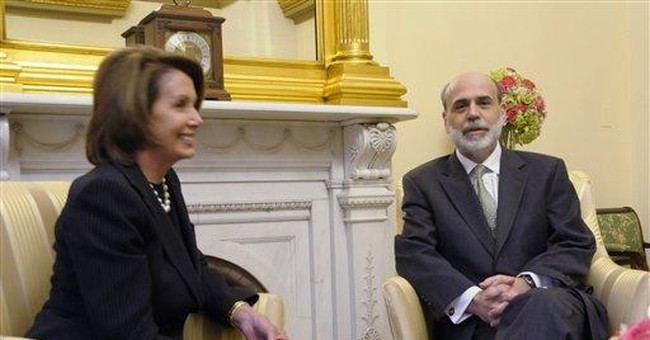 We turn to the office of the Secretary of the Senate to make sense of all the upcoming "sessions" now on the calendar for the new "second session" of the 110th Congress.

The Senate convened at 11 a.m. yesterday for a "pro forma session," although no votes were taken because the body won't actually reconvene for the second session until next Tuesday — that is, after another pro forma session Friday, which lasts usually a few seconds at most (to satisfy constitutional obligations). Still confused?

"January of 2008 brings with it three types of sessions: a new 'session' of Congress, a 'joint session' for the State of the Union, and maybe even a 'few pro forma sessions,' " the secretary educates. "In addition, a meeting of one or both chambers is called a 'session.' Either chamber is said to be in session on any particular day when it is meeting."

In other words, Congress can go into session even though its already in session.

Then there are the joint sessions, when the Senate and the House meet to conduct formal business, listen to an address by the president, or count electoral votes.

One of our favorite-sounding sessions is the "lame duck session," which occurs when Congress reconvenes following the November general elections to take care of unfinished business.

"Among the lawmakers who return for this session will be those who were defeated for re-election or chose not to run again. They are informally called 'lame duck' members participating in a 'lame duck' session," the secretary explains.

Of course, there are "special sessions," when the president convenes a session after Congress has adjourned sine die (indefinitely); and there are also "closed sessions," sometimes referred to as "secret sessions," which we can't tell you too much about because classified national security material is introduced and debated.

One interesting piece of trivia: The secretary's office says that between 1789 and 1795, every session of the Senate was closed, and until 1929 the Senate routinely discussed all of its executive business — treaties and nominations — in closed sessions.

Did Republican Rep. Jeff Flake of Arizona, having discovered a $375,000 earmark for dairy farm profitability in Pennsylvania in the Omnibus Appropriations bill for fiscal 2008, actually say "taxpayers deserve butter than this?"

The congressman had butter find himself a butter speechwriter.

Let's say MSNBC's Chris Matthews doesn't get his wish and New York Sen. Hillary Rodham Clinton does become the next president of the United States. One question pundits have been contemplating is what role Bill Clinton might play in any future Clinton administration.

Mr. Clinton told this columnist in New York last year that if history is made in November 2008, he would welcome the opportunity to circumnavigate the globe as a "goodwill ambassador" of sorts, undertaking fence-mending as needed.

"I would do whatever she wants me to do," Mr. Clinton added.

Now we see that the American Spectator has interviewed Washington pundit Cheri Jacobus, who says while "the affection for Bill may be providing a boost for Hillary Clinton in the Democratic primary, it is unclear how the prospect of extending a two-family dynasty would play" — referring, obviously, to the Bushes and Clintons (we pointed out a few days ago that one-quarter of the U.S. population has lived only under presidents named Bush and Clinton).

"It's a double-edged sword for Hillary Clinton," Miss Jacobus opines. "On the one hand, she wants to look strong and presidential, but every time she stands on the stage with her husband, she doesn't look presidential, she looks more like a first lady."

In her new book "PRUDE: How the Sex-Obsessed Culture Damages Girls (and America Too!)," author Carol Platt Liebau charges that "in a culture that celebrates Paris Hilton, thong underwear, and songs like 'My Humps' (wherein the female singer extols the sexual magnetism of her breasts and buttocks), there's scant recognition or respect for female modesty or achievement that isn't coupled with sex appeal."

At 4:30 p.m. today, the Los Angeles author will participate in a panel on "Marriage, Modesty & Modernity," at the University Club on 16th Street Northwest, hosted by the Claremont Institute. Other panelists will include Best Friends Foundation President Elayne Bennett, Kathryn Jean Lopez of National Review Online, and Jennifer Marshall of the Heritage Foundation, who is author of "Now and Not Yet: Making Sense of Single Life in the Twenty-First Century."