10 More of the Greatest Pieces of Conservative Wisdom 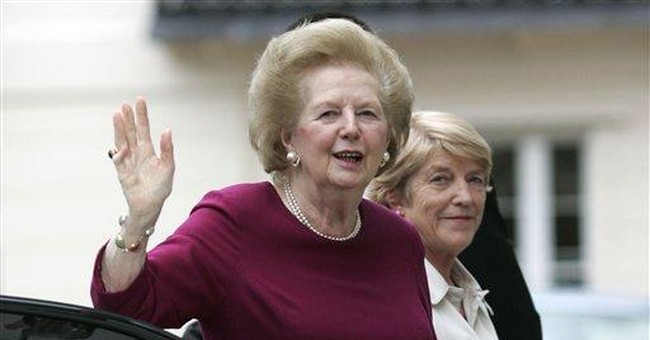 "A measure of hypocrisy is necessary to a functioning society. It's quite possible, on the one hand, to be opposed to the legalization of prostitution yet, on the other, to pull your hat down over your brow every other Tuesday and sneak off to the cat house on the other side of town. Your inability to live up to your own standards does not, in and of itself, nullify them. The left gives the impression that a Republican senator caught in a whorehouse ought immediately to say, "You're right. I should have supported earmarks for hookers in the 2005 appropriations bill." That's the reason why sex scandals take down Republicans but not Democrats: Sex-wise, the left's standards are that whatever's your bag is cool – which is the equivalent of no standards. Thus, Monica Lewinsky was a "grown woman" free to make her own decisions on the carpet of the Oval Office. Without agreed "moral standards," all you have is the law. When it's no longer clear something is wrong, all you can do is make it illegal." -- Mark Steyn

The flesh is weak and we human beings often do foolish things that conflict with our own moral values. Not to excuse the hypocrisy of that, but who's the better person -- the fellow who advocates high moral standards and falls short occasionally or the person who never falls short because he advocates living an immoral life? Clearly, the former is the better husband, the better father, the better Christian, and just plain old better for our society. Hypocrisy is a notable failing, but there are still far worse things than hypocrisy.

"The virtue of a federalist, republican form of government is that the more you push these decisions down to the level where people actually have to live with their consequences, the more likely it is they will be a) involved and interested in the decision-making process, and b) happy with the result. Federalism is also morally superior because it requires the consent of the governed at the most basic level. Sure, your side can lose an argument, but it's easier to change things locally than nationally. And, at the end of the day, if you don't get your way, there's always the highway. It's easier to move to the next state than it is to move to Canada." -- Jonah Goldberg

The likelihood of a decision being wise is often inversely proportional to how far removed the decision maker is from the person directly affected by the decision. This is why it's so disturbing to see the federal government trying to regulate everything from what kind of TV we can own to the sort of light bulbs we have in our homes.

Even the most dull-witted bunglers in the mountains of Appalachia or the outskirts of Berkeley probably have a much better handle on their own individual circumstances, how to make themselves happy, and how to spend their own money than a Ph.D from Harvard with a genius level IQ who's sitting in Washington, D.C.

It is patriotism that helps transform a mere stranger to a countryman that, under the right circumstances, a man will help and defend, sometimes at the cost of his own life. For love of country, people will donate money, toil for countless hours in the most thankless of jobs, and even take up arms if necessary. Such a noble urge should be encouraged, taught to our children at every opportunity, and honored for the good it does for our society.

"The accumulation of wealth is a process which is of itself morally neutral. True, as Christianity teaches, riches bring temptations. But then so does poverty." -- Margaret Thatcher

Too many people in our society have been persuaded that most rich people have, at worst, done something immoral to become so wealthy or at best, that they're merely lucky. Although there are some people who fit that description, most affluent people got that way by serving their fellow man in some form or fashion. Moreover, these successful people often tend to pay enormous sums in taxes and employ large numbers of people directly or through their purchases. That is something to be admired and encouraged, not frowned upon, lest we learn the tragic lesson of Aesop's farmer, who killed the goose that laid the golden egg.

"It is not the critic that counts; not the man who points out how the strong man stumbles or the doer of deeds could have them better. The credit belongs to the man who is actually in the Arena, whose face is marred by dust and sweat and blood; who strives valiantly; who errs and comes short again and again, because there is no effort without error and shortcoming; but he who does actually strive to do the deed; who knows the great devotion; who spends himself in a worthy cause, who at the best, knows in the end the triumph of high achievement, and who at the worst, if he fails while daring greatly, knows that his place shall never be with those cold and timid souls, who know neither victory nor defeat." -- Teddy Roosevelt

We live in a "microwave" society where we expect everything right now, exactly the way we want it, with zero mistakes. That's not the real world. Human beings are not robots, and, yes, we make mistakes, fall short, and disappoint.

It's not a bad thing to have high standards, but there's very little to be said for destroying men's entire careers for a single thoughtless statement, demanding that politicians address our every problem to make us happy, or expecting soldiers to never make an honest mistake in the middle of a war zone.

Put another way, excellence is achievable, but perfection is not.

"Tolerant, but not stupid! Look, just because you have to tolerate something doesn't mean you have to approve of it! ..."Tolerate" means you're just putting up with it! You tolerate a crying child sitting next to you on the airplane or you tolerate a bad cold." -- South Park

For all of us to live in an open, free society with a wide variety of different views, we have to be able to tolerate a variety of widely diverging opinions. However, this is not enough for some people, who insist that we treat every opinion and lifestyle choice as equally valid and healthy for society. But, what they are failing to understand is that there is a difference between tolerance and acceptance. Just because you can do something doesn't always mean you should.

"Diversity worship and multiculturalism are currency and cause for celebration at just about any college. If one is black, brown, yellow or white, the prevailing thought is that he should take pride and celebrate that fact even though, just as in the case of my eye color, he had nothing to do with it. The multiculturist and diversity crowd see race as an achievement. In my book, race might be an achievement, worthy of considerable celebration, only if a person was born white and through his effort and diligence became black." -- Walter Williams

Race-based groups like the NAACP, the KKK, La Raza, and the American Nazi Party do very little good and much harm to our country. In fact, the very idea that something as arbitrary as skin color should determine people's actions, beliefs, and political party is odious and un-American. Moreover, it has long been apparent that the sort of ethnic tribalism inevitably displayed by people in these race-based groups is actually more of a source of strife in our country than the racism they are supposedly combating.

There are many reasons why people should prefer capitalism over socialism. One of the most compelling is that it is better to be poor while still having the opportunity to become wealthy through your own efforts than to be poor and have little opportunity to advance, but to share your fate with almost everyone else.

"People sleep peaceably in their beds at night only because rough men stand ready to do violence on their behalf." -- George Orwell

Because we humans are such short-lived creatures, we tend to have a myopic view of the world. We think that because we're civilized, everyone else is just as civilized. However, the truth is that nations like America are the exception and the rule, historically, has been little more than the law of the jungle.

The world is full of evil men with bad intentions who will take more than a mile if you give them an inch. When we forget that and think we can just talk out every difference with our foreign enemies who have sworn to kill us -- or begin to treat home grown criminals in our jails like they're victims of society instead of victimizers who got where they are by preying on their fellow citizens -- there is always a heavy price to be paid.

"When government does, occasionally, work, it works in an elitist fashion. That is, government is most easily manipulated by people who have money and power already. This is why government benefits usually go to people who don't need benefits from government. Government may make some environmental improvements, but these will be improvements for rich bird-watchers. And no one in government will remember that when poor people go bird-watching they do it at Kentucky Fried Chicken." -- P.J. O'Rourke

It's always amusing to hear a politician rail against "special interests" because when they begin naming names, you'll notice that they always seem to be the groups that are influential with THE OTHER political party. So, what inevitably happens when a different political party takes power? The old special interests are shoved to the side, people cheer, and then shortly thereafter the new special interests are catered to and the cycle starts anew. The key to stopping this behavior isn't to change parties or put some new rule in place; it's to get the government out of the business of handing out favors in the first place.