John Hanlon
|
Posted: Mar 11, 2016 12:01 AM
Share   Tweet
The opinions expressed by columnists are their own and do not necessarily represent the views of Townhall.com. 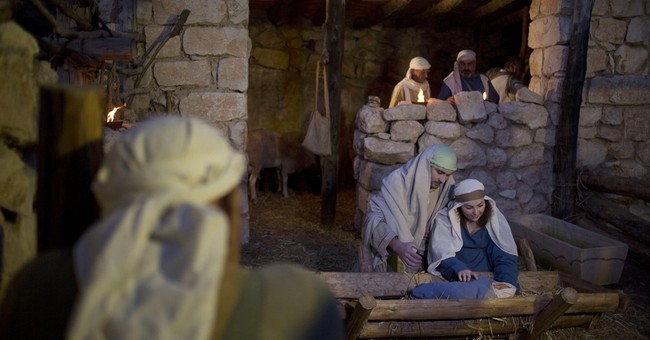 In recent days, we’ve seen more films willing to explore both the life and legacy of Jesus Christ. Only a few weeks ago, Risen depicted a fictional story about a Centurion who was searching for the body of Christ after it mysteriously disappeared from its tomb three days after his death.

The new film The Young Messiah takes a different approach. Instead of imagining what life must’ve been like after Jesus’ crucifixion, this drama imagines what Jesus’ youth was like as the young man came to terms with his own abilities and his destiny. Based on Anne Rice’s novel Christ the Lord: Out of Egypt, the film is fictional but as its opening text notes, it was “inspired by Scripture and rooted in history.”

In addition to directing the feature, Cyrus Nowrasteh co-wrote the screenplay with his wife Betsy Giffen Nowrasteh (the duo had most recently collaborated on the unforgettable 2009 feature, The Stoning of Soraya M.).

I recently had the opportunity to chat with Cyrus about his work on the movie and how Hollywood’s relationship with faith-based films has changed over the years. Below is a slightly edited transcript of our conversation.

How did you originally come in contact with the book the film was adapted from?

Well, the book came out over ten years ago and my wife read it when it came out and I remember her reading it. My wife is a screenwriter. We write screenplays together and separately but I remember talking about the book and how moved she was by it and what the premise was, which is a seven-year-old Jesus sensing there was something different about him and starting to ask questions and coming to the full comprehension of who he is and I thought that is a brilliant, brilliant idea for a story that has never been done but I was in no position to get the movie made then.

Then in 2009 we did a film called The Stoning of Soraya M., which was released by Lionsgate — primarily an art-house release — and Anne Rice wrote a rave review of The Stoning of Soraya M. and through some happy coincidences, we were able to get a copy of [her] book to consider adapting it to a film. That’s how it all started and I read it, fell in love with it and realized it had great potential.

When you’re adapting a book into a film, you have to choose priorities because you can’t fit everything from a book into a feature-length movie.  What was your top priority in terms of this adaptation?

It’s hard to say. There are three or four great and beautiful scenes in the book that are almost word for word like that in the movie but your task in doing an adaptation is to sort of streamline things, dramatize them a little bit more, give them a little bit more forward-propelling plotted narrative drive  but with this you also have theological issues that you have to consider and reconsider because we’re telling a story that’s outside of the Bible and we want to remain consistent with the Bible as much as possible in our interpretation of the character of young Jesus so there’s all kinds of considerations in play.

Were there any passages in the Bible you kept going back to make sure everything was accurate?

The Bible does not cover these years. We’re covering age seven of young Jesus. We’re trying in a way to foreshadow the character of Jesus as he’s revealed in the Bible through the character of Jesus as a child so they have to be consistent. There has to be a compassion and a generosity and a kindness and a curiosity of this young child that mirrors Jesus as he’s portrayed in the Bible.

How difficult was it to find the right person to play Jesus and how did you know you found the right actor to do it?

It was a difficult process because there aren’t a lot of seven-year-olds with a long acting resume. We did a global search. We had an open casting call out. We had tapes sent in by parents of their children. We probably saw beyond 2000 kids and from all over. We needed to cast a child first cause I’m going to cast around him then. I can’t cast an actor from Greece as a child, an actor from Australia as Joseph and an actor from inner-city Chicago with a Chicago accent playing Mary cause it’s just not gonna work. People are going to laugh you off the screen so whoever the child is, we cast around him and remain consistent with accent and look. We ended up with Adam Greaves-Neal, who is an extraordinary young actor out of London and we cast around Adam.

It’s a heavy responsibility for a child to be portraying Jesus onscreen but young Adam did it with real grace under pressure. I think he’s a wonderful actor and he’s done a wonderful job.

When you first met Adam, did you know immediately?

I knew immediately. There was no doubt. He just had a presence about him, an intelligence and a sweetness. He was it.

Did you see signs of God’s presence when you were filming the movie?

We had many many obstacles thrown before us in the making of this movie. We had a jump start in early 2013 when we were deep in preproduction and about to start shooting but we had to shut down [for financial reasons]. We had sets being built. Casting was being done and we had to shut down and three million dollars went down the drain. That’s a death knell for a movie. You’re done. The likelihood of getting the movie back up after something like that is slim and none but this one would not die.

It took a year and nine months for the movie to get back up and was so much better for it. So many things were better about the film as a result of that delay and so it was kind of a blessing in disguise.

During that period, was your faith in the film tested?

Sure. I went through some deep dark moments wondering ‘Okay. Am I the right person to make this film? Is my faith deep enough? Maybe God’s telling me something’ but it wouldn’t go away. The corpse was always breathing. One day, it got up, stood and started running and it was amazing.

How did making this movie change your faith?

I think it deepened it and enriched it certainly based on the experiences I just told you about. It was an amazing process. All of the obstacles that had been thrown up before this film. What we had to do to get there. We were blessed. We had one rain day out of a forty day shoot. It was almost perfect weather. Our child Adam matured in the intervening year and nine months to the point where I felt like he really understood the scenes, what he was playing and how to play it. He had become an actor.

Has Hollywood’s relationship with faith-based films changed over the past few years? It does seem like there are more religious films coming out now.

The Young Messiah is now in theaters everywhere.