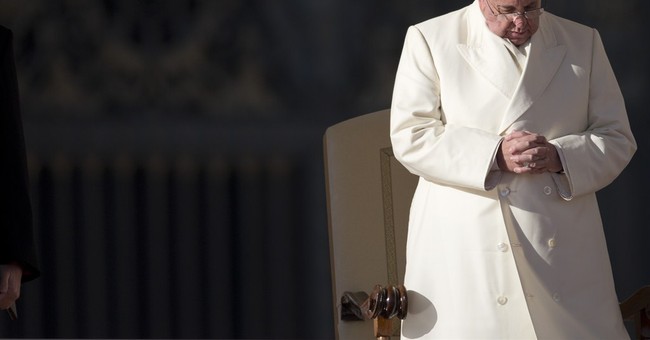 "Pope Francis attacked unfettered capitalism as 'a new tyranny,'" reads the lead of the Reuters story by Naomi O'Leary. She is referring to the Evangelii Gaudium, the latest apostolic exhortation from the Holy Father. Similar headlines appeared at NBC, at the Daily Kos, in the Nation and elsewhere. But as Robert Ramono points out, nowhere did the pope actually say those words.

Still, the document is a mixed bag. It does contain some anti-capitalist rhetoric, using phrases familiar on the left. But it is also full of anti-statist, anti-collectivist exhortations. On balance the entire document looks like it was written by a committee whose members all have different views.

For me, however, this is a disappointment — a step back from progress I thought had been made only a few years ago. I participated in a conference at the Vatican in 1996, at which a group of pro-free enterprise intellectuals were assembled to analyze the crisis of the family and the role of government in creating it.

John Paul II met with our group and greeted each of us individually. We all thought this was a turning point for an institution that hitherto had shown little understanding of economics or appreciation of how markets work.

Now it seems that everything that was learned has been unlearned.

Here are some of the things Pope Francis had to say:

...[S]ome people continue to defend trickle-down theories which assume that economic growth, encouraged by a free market, will inevitably succeed in bringing about greater justice and inclusiveness in the world. This opinion, which has never been confirmed by the facts, expresses a crude and naïve trust in the goodness of those wielding economic power and in the sacralized workings of the prevailing economic system.

Let's start with first principles. Search almost any introductory economics textbook and you are unlikely to find the words "survival of the fittest," "trickle-down theories" or "powerful feeding on the powerless." These are not economic terms. They are slurs used by those on the left to cast aspersions on free markets and pro-growth policies. Worse than that, these are terms used by those who tend to reject economics, history and social science in general.

Here are some undisputed facts. For the 100,000 year history of the human race (including most of the 2,000 year history of the Catholic Church) virtually every human on this planet lived on about $1 a day — rarely more than $3 a day. This was no one's fault. It was the natural condition of humankind. And then, about 200 years ago, a remarkable thing happened. It's called capitalism. Wherever free markets and the institutions that sustain them have developed, the lives of people have become immeasurably better.

Although "unfettered capitalism" doesn't really exist in the world today, the closest thing to it would probably be Hong Kong. When this country became a British colony, it was a rock in the ocean with no natural resources and an impoverished population. By the time Britain handed the country back to China, the per capita income in Hong Kong was higher than it was in Britain.

The success of Hong Kong fits a pattern. In general, countries with more economic freedom have higher standards of living, longer life expectancies and more prosperous lives by almost any measure. Further, the greater the degree of economic freedom, the higher the standard of living of those at the bottom of the income ladder. Economic freedom is also associated with more equality of income. These principles have been verified year after year in annual studies of economic freedom around the world by the Fraser Institute and the Cato Institute. (See a summary here.)

When I visited the Vatican almost two decades ago, these principles were not in dispute. Participants in the conference included Nobel Prize-winning economist Gary Becker (University of Chicago) and America's foremost writer on theology and capitalism, Michael Novak (American Enterprise Institute). The attendees were united in a common belief that big government is more likely to be a cause of problems than a solution. As I wrote in The Freeman:

The conference document, published in Osservatore Romano, the unofficial newspaper of the church, places much of the blame for the breakdown of the family on government. It says "the welfare state, and its social welfare systems, which began with the best intentions, accelerate this family breakdown by weakening parental responsibilities and choices." Although some recommendations can be interpreted as expanding the role of government in some areas, the overall theme is that power should be transferred from government to families. In addition, the document states that deregulation of the labor market would free employers "to give jobs to young people and with the elimination of rent controls young families would gain adequate housing."

And the pope at that time was also explicit:

In his most recent encyclical on economics, Centesimus Annus, Pope John Paul II noted that the modern welfare state is often costly, bureaucratic, and counterproductive; further, he averred that it often substitutes for private sector charity that does a better job. Although contending that it can be a mixed blessing, the Pope called capitalism the most efficient instrument for utilizing resources and effectively responding to needs.

The current pope hales from Argentina and this may influence his thinking. Although free markets have emerged in Latin America to one degree or another, the countries of Central and South America have often experienced great difficulty adopting the institutions of capitalism. (See Hernando De Soto's explanation of this.) More often than not they have been living under crony capitalism. In Argentina some call it "fascism." It's easy to confuse these other isms with the free market forces that have so successfully lifted the developed world out of poverty over the last two centuries.

Unless advisers are on hand to explain the differences, that is.

It sounds like we need another Vatican economic conference.