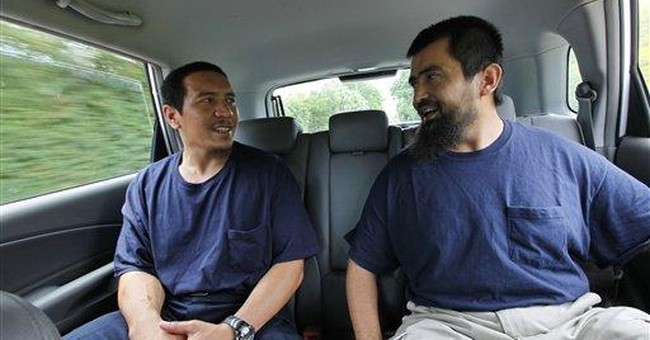 It did not come with the promise of 72 virgins, but newly released Guantanamo Bay detainees managed to make it to paradise after all.  What the fawning media neglected to mention was that these supposedly friendly lads all trained at an al Qaeda-linked terrorist camp in Taliban-controlled Afghanistan.

The absence of critical coverage might help explain why Team Obama is proudly still planning to reward even more Gitmo detainees soon with new digs in paradise—almost all of whom possess terror training on their résumés.   Nor will the press spend much time explaining that taxpayers could be footing a bill of over $1 billion for the new Terrorists in Paradise ProgramTM.

Serving as a painful reminder to Americans about the degradation of journalism, the mainstream media “reported” on the exploits of hardened Islamic extremists—as they went swimming, fishing, and frolicking.  Aside from Fox News, not one mainstream media outlet turned a critical eye to the “former” terrorism suspects flying to Bermuda on a private jet accompanied by President Obama’s lawyer, White House Counsel Greg Craig.

One aspect of the story did generate actual reportage—but only on one side of the Atlantic.  U.K. news outlets reported that the British government was, ahem, “pissed.”  Because of U.K. journalists, we know that the State Department ignored basic protocols by keeping in the dark America’s steadfast friend, which as Bermuda’s colonial master is responsible for its foreign policy.

U.S. media outlets, in sadly typical fashion, largely glossed over the kerfuffle.  Just for sheer news value, wouldn’t it make sense to cover the man-bites-dog story of how the president who was supposed to usher in an era of good diplomatic feelings had managed to “piss off” one of America’s closest allies?

Many fascinating angles abound, yet the media only regurgitated what it was spoon-fed by the White House.  The most obvious question to explore: Why, if these Uighurs (as the Chinese Muslims are known) are actually the sweet souls suggested in countless stories over the weekend, did no other country want them?  And why did the U.S. have to resort to knee-capping (or worse) one of its oldest—and most important—friends?

News accounts have suggested that they are harmless chaps who were caught in the wrong place at the wrong time.  Perhaps.  But the “wrong place” was very wrong: Pakistan and Taliban-controlled Afghanistan, and most of them trained an al Qaeda-linked training camp in Tora Bora.  And the “wrong time” was equally troubling: shortly after 9/11.

The very same U.S. government now tripping over itself to declare as genuinely benign the Uighurs also believes that the Tora Bora camp at which most of them trained was sponsored by al Qaeda.  (To the casual reader, Tora Bora sounds familiar because it is the place U.S. forces barely missed a fleeing Osama bin Laden in late 2001.)

Officially, the Uighurs are not a threat to the United States because the sole focus of their rage is China.  Then why, a reasonable observer might ask, does the U.S. government deem the Uighur organization with which most of the Gitmo detainees were affiliated, the East Turkistan Islamic Movement (ETIM), a Specially Designated Global Terrorist?

Despite this weekend’s news accounts conveniently describing the Uighurs as simply unlucky tourists, evidence suggests otherwise.  The ETIM-run Tora Bora camp wasn’t exactly a vacation resort, as the vast majority of the Gitmo-detained Uighurs admitted receiving weapons training, according to U.S. government documents that have been made public.  As the blog The Long War Journal observed, ETIM “is dedicated to international jihad and shares a similar ideology with al Qaeda and the Taliban.”

ETIM and al Qaeda share more than common goals and beliefs.  “Leaders of the ETIM belonged to the inner circle around bin Laden, including Hasan Mahsum (a.k.a. Abu Muhammad al-Turkistani, who was killed by Pakistani security forces in 2003), so it’s dubious that these guys are truly ‘freedom fighters,’” notes David Draper of the NEFA Foundation.  “It’s even more unlikely that these guys are telling the truth when they say they’d never heard of al Qaeda.”

Contrast known facts to the fuzzy feature stories about the Uighurs in paradise.  Typical is this pleasant description from the Associated Press: “The four men in short-sleeve shirts looked like ordinary tourists, enjoying a Sunday lunch and butter pecan ice cream afterward as they observed the sparkling waters surrounding this Atlantic resort island.”

And there’s more news coming up for the mainstream media to ignore.  13 additional Uighurs are scheduled to be released soon from Gitmo, bound for the picturesque Pacific island of Palau, best known for hosting one season of the CBS reality show, “Survivor.”

This “relocation” will cost the taxpayers a mint, too.  Palau is reportedly receiving $200 million in “development assistance,” which works out to roughly $15 million per “former” terrorism suspect.  All parties involved deny any sort of quid pro quo, which would mean the timing was pure serendipity.  Again, perhaps.

Assuming that the facts are actually as they appear, though, paying countries to take terrorists could result in quite a tab.  If Obama wants to release an additional 70 Gitmo detainees, a fairly conservative estimate in order to minimize the number of suspects held after the base’s scheduled shuttering early next year, the total cost would be over $1 billion in taxpayer money—assuming no inflation.

While many in the mainstream media are not-so-privately cheering Obama’s planned closure of Guantanamo Bay, does their fervor excuse them from meeting even minimal journalistic standards?

Here’s the key question: Would they maintain their superficial coverage if the Gitmo detainees were going to move into their neighborhoods?