Yet Another Troubling Terror Trial 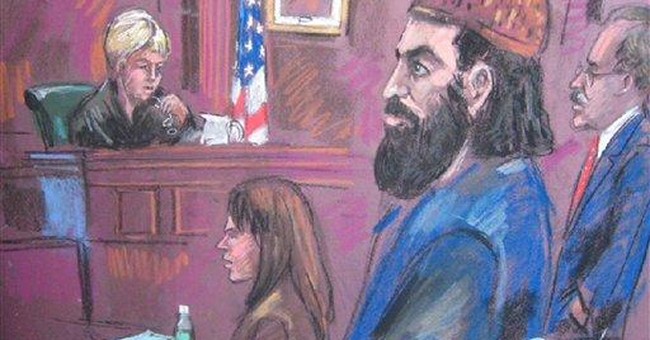 Given that hard evidence is often scarce in trials of unsuccessful terrorists, federal prosecutors in Miami no doubt felt fortunate to be trying defendants who participated in a ceremony pledging allegiance to al Qaeda—which was captured on video.

The defendants took surveillance photos of government buildings. The leader of the cell admitted requesting from an apparent terrorist financier boots, uniforms, vehicles, machine guns and $50,000. Just in case the reason for the request was unclear, Narseal Batiste stated—on tape—that it was for creating an “Islamic army” to wage a “full ground war” and commit an attack that would be “as good or greater than 9/11,” such as blowing up the Sears Tower.

It wasn’t enough. They weren’t convicted.

In a stunning defeat for common sense, a Miami jury last month couldn’t convict seven defendants on a single of the 28 total charges. One man, who had moved to Atlanta months before the arrests and had severed ties with the group, was acquitted entirely. The jury deadlocked on all charges brought against the other members of the “Liberty City Seven.”

Though prosecutors are re-trying the remaining defendants soon, odds of success the second time around seem dicey. Put simply, it appears that several jurors were determined to acquit, no matter the evidence.

Consider that Batiste’s explanation should have prompted laughter, not doubts about his guilt: He claimed he did it for the children.

Taking the stand, the group’s leader testified that he was actually trying to con the undercover informant to get money to build a community center.

Even though the defense provided no independent, corroborating evidence, several jurors believed the “theory of it all being a scam,” said jury foreman Jeffrey Agron. He offered that the defense indeed had a certain appeal—but nothing to back it up. Agron explained, “I kept saying, ‘It’s a great story. It makes sense. Now where’s the evidence?’”

One media-touted theory is that the defendants inspired sympathy as hapless wannabes. A dismissed juror—who was shown the door near the midpoint for reading a police pamphlet outside the courthouse on terrorism during the trial—explained that he was favoring acquittal for that very reason. “They were playing ninja,” said Eldon Brown. “These guys were living in the movies. They were completely out of touch with reality.”

Then there’s the inherent problem of prosecuting unsuccessful terrorists: By definition, they never actually have succeeded.

Juror Michael Silva clearly didn’t feel threatened by the defendants, explaining after the trial, “It was not like [prosecutors] had evidence of somebody planting explosives.” Silva did not state that he pushed for a universal acquittal, but Agron said that a different juror kept insisting during deliberations that explosives being planted or something similar would have been necessary.

Never mind that one of the charges brought against each of the defendants—conspiracy to support al Qaeda—required no imminent attacks or anything beyond an agreement to support bin Laden’s network. Swearing an oath to al Qaeda clearly satisfies that requirement, but the defendants also took reconnaissance photos of government buildings—more than enough under the law to convict on the conspiracy charge.

Not discussed in the post-trial analyses is something very much on the minds of people responsible for putting away terrorists, namely that Islamic pressure groups, such as the Council on American-Islamic Relations (CAIR), may have made it substantially more difficult to win convictions in terror trials.

For years, CAIR and its ilk have spewed hyperbolic rhetoric casting Muslims nationwide as the victims of an Islamophobic law enforcement. And the narrative of a government hellbent on prosecuting as a terrorist any Muslim opposed to U.S. policies has found a receptive audience outside the Islamic community.

Lending credibility to these obscene charges are none other than high-ranking government—and law enforcement—officials, who headline events sponsored by CAIR, Islamic Society of North America and other Islamic conspiracy theorists. The government is, in short, legitimizing those who seek to de-legitimize them.

Several people who have been closely involved in terrorism trials have noticed unusual skepticism of the government’s motives and evidence in prosecutions of Muslims facing terror-related charges. One government official described an incident where a juror openly insinuated that the accused Muslim was the victim of anti-Islamic bias.

It’s entirely possible that knee-jerk distrust of the government played a role in two high-profile cases. Mountains of damning evidence existed in the prosecutions of Sami al-Arian in Florida and the Holy Land Foundation executives in Texas, yet neither trial yielded any convictions.

Unusual—and unsubstantiated—skepticism of the government is the only rational explanation in the Liberty City mistrial. To the jury’s acquittal hardliners, hundreds of recorded conversations and intercepted phone calls were trumped by Batiste’s uncorroborated, after-the-fact story that he was trying to get money for a community center.