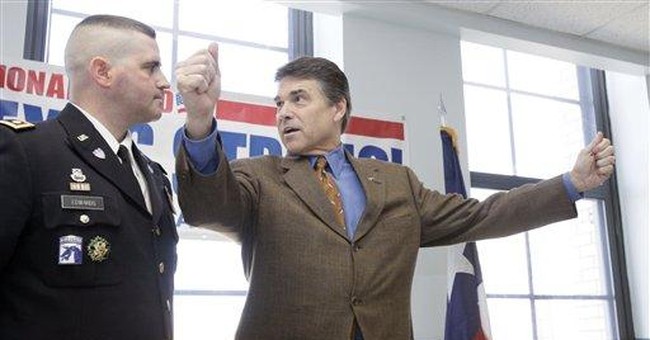 That likely means that Perry will enjoy a fourth term as Texas governor — the longest serving governor in Texas history. That's remarkable, considering Texans' longstanding aversion to incumbent politicians, especially during an era of tea parties, which are especially strong in the Lone Star State.

Early primary returns accurately reflected polling in late hours of the race, with Perry eking out an early 20+ percent margin over Hutchison. Spoiler candidate Debra Medina, a self-proclaimed tea party activist who is actively endorsed and supported by Texas secessionists, won 17 percent of the vote, with Hutchison getting 30 and Perry getting 52 percent.

The method by which Hutchison conceded was curious. She threw in the towel while returns were still coming in — and while Perry only had 52 percent of the vote. If Perry eventually would've slipped below 50, a runoff would be required. But Hutchison said she would concede no matter if a runoff was required or not.

The move will probably benefit her in the long-run. Hutchison had been stockpiling campaign cash to fight Perry in a runoff, but now that she doesn't have to do that, she can keep presumptively keep the cash for her Senate re-election bid.

Perry's lead seemed to indicate that Texas voters are warmer towards Texas insiderism than Washington insiderism — Hutchison has been in the Senate for sixteen years, compared with Perry's ten year stint as governor. But Perry also benefitted from Hutchison’s off-kilter campaign. She paraded around endorsements by James Baker and the first President Bush, two entrenched Texas politicos that have no resonance with independent tea party voters. She flip-flopped on when she would leave her Senate post while making her gubernatorial bid. And she was tripped up last-minute by an abortion question during a televised debate, which made her widely perceived as was far to the left of Perry on abortion despite a 94% approval rating by the National Right to Life.

Perhaps the larger narrative of Hutchison is that she has needed to transition from a time when bringing home earmarks for one’s state was considered a basic necessity to a time when earmarks are considered a dirty word. Perry suffered from that dissonance as well, having promised to reject federal bailout money then using them to give benefits to his state’s unemployment rolls. But Hutchison’s Washington connections were too much to overcome, and Perry was seen as the far more conservative choice in a state where being conservative is everything. Topped off with endorsements from Sarah Palin, the NRA, and other big conservative players, and Perry had no trouble maintaining a strong lead throughout the campaign.

Perry’s biggest threat, Medina, faded away after Medina made the comment that she would entertain 9/11 truther conspiracy theories live on Glen Beck’s radio program. She quickly issued a retraction, but the damage was done. The conservatives who were considering Medina rushed back to Perry, and the possibility of Medina siphoning off votes disappeared along with the possibility that Hutchison might enjoy the spoils.