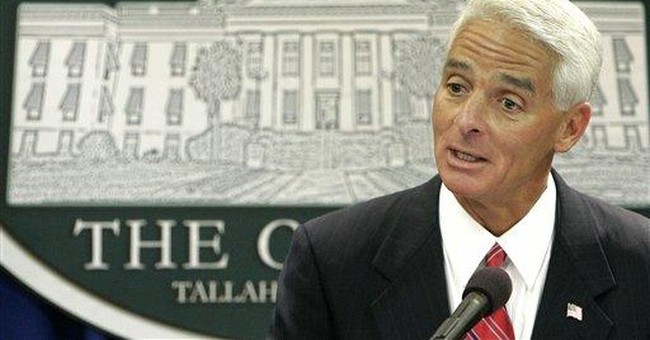 When Marco Rubio announced his candidacy for the open U.S. Senate seat in Florida, he inadvertently launched another battle in the war over the GOP’s march to the center.

Some observers say that immediately supporting a more centrist, establishment politician bodes poorly for the GOP’s prospects in Florida and elsewhere. Mario Lopez is president of Hispanic Leadership Fund, which works to expand the GOP’s base.

“It just seems like there are a certain amount of assumptions there, not all of which we agree with,” said Lopez. “It’s not a guarantee that somebody a little more conservative is going to be a loser in Florida. Someone with a positive, clear, articulate message can certainly win.”

In addition to his centrist approach to social issues and overtly liberal environmental policies, Crist endorsed Obama’s stimulus plan, which was supported by only three Republicans in Congress. One of those Republicans, Arlen Specter, has since switched parties.

As Speaker for the Florida House of Representatives, Rubio promoted a strict diet of fiscal responsibility and limited government, and is more conservative on social and cultural issues.

“Whether it's right or wrong for them to have done so, there is a perception that the National Republican Senatorial Committee and the RPOF lining up behind Crist so easily shows that they're not sufficiently interested in pushing young leaders forward and bringing new, diverse talent to the party's front bench on a national level,” said a Republican strategist who is closely following the Senate race in Florida.

Senate leaders said that choosing Crist over Rubio was more pragmatic than ideological.

"It was a choice about who could win," NRSC Chairman John Cornyn (Texas) told Politico, a week after he said that he would take no position in the race.

But the fact that Cornyn did take a position may have sparked even more debate about Rubio’s viability as the Republican nominee. Rubio’s lack of name recognition and untested fundraising potential means that any publicity is good publicity, said Michael Franc, Vice President for Government Relations at the Heritage Foundation.

Crist promoted a far more conservative message during his gubernatorial race than he has adhered to during his governorship, meaning that Florida voters are receptive to a more hard-line candidate, said Franc. They will be even more receptive to one in 2010.

“The kind of voters who during good economic times might have gravitated to the center or center left are going to be looking at more fundamental things” such as lower taxes and limited government, said Franc. ”They’re not going to be voting on esoteric issues like gay marriage or environmentalism.”

Senate leaders have recognized that Crist may not be a reliably conservative vote in the Senate. But Crist has sky-high approval ratings and is seen as a far safer choice in the general election than Rubio.

This leads some observers to question why Crist wouldn’t run for another term as Governor and let Rubio take a crack at the Senate seat. This point is especially poignant given Crist’s reputation as someone who is more interested in climbing the political ladder than representing the state of Florida. Crist spent one term as Attorney General before running for the governorship, where he has again spent only one term before announcing his Senate bid.

Adding Crist to the ranks of GOP moderates and defectors like Olympia Snowe and Arlen Specter may mean a diluted Republican presence in the Senate even if the party does manage to earn more seats there. And the NRSC setting a precedent of endorsing moderate candidates this early on in the election season could signal a more widespread shift to the center for the party as a whole.

Democratic Strategists Acknowledge Grim Reality: Kamala Harris May 'Do More Harm Than Good'
Rebecca Downs
Cuomo's Groping Accuser Willing to Take a Polygraph, Requests He Take One Too
Landon Mion
GOP Members Demand Data from a CDC 'Sowing Confusion and Distrust' on Mask Guidelines
Rebecca Downs
The Left's Coercion Campaign Against the Unvaccinated Is About To Look Even More Foolish
Matt Vespa
NYC Business Owner Lays Out How Another Mask Mandate Will Crush Surviving Stores