Jerry Falwell, Jr.
|
Posted: Jul 04, 2019 12:01 AM
Share   Tweet
The opinions expressed by columnists are their own and do not necessarily represent the views of Townhall.com. 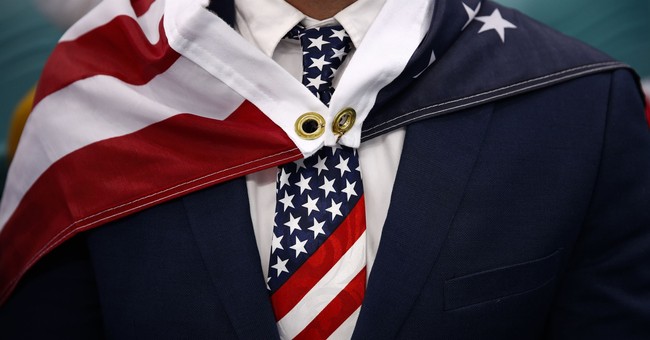 On Independence Day, we celebrate not only the beginning of our country’s history, but the story behind our shared membership in the American nation — one that the Democrats would prefer that we forget.

It is not a time simply to remember the founding, Thomas Jefferson’s immortal words, or the mechanics of how our great republican experiment began. It is the day on which we most remember that we — Americans — are America.

This country is not simply a place, nor is it a mere set of ideas. It is a people, a set of shared experiences, institutions, and a story that binds us to this land in a way others are not.

There are warts and scars in that story, like there are in the history of any nation. It includes the bloodbath of the Civil War that proved necessary to overcome slavery, that fatal flaw of the founding that Jefferson called out in his first, July 2, 1776 draft of the Declaration of Independence. It includes our government’s atrocious treatment of American Indians as we moved west across the great frontier, and against Japanese Americans following Pearl Harbor. And it includes centuries of regrettable societal hostility towards gay people.

That does not mean it is acceptable for us to discard our founding values, disparage our history, or forget that we’re Americans first before we’re a race, tribe, or sexual orientation. It doesn’t mean we can forget the Founders, tear down their statues, and replace them with the secular saints of 20th century progressivism. It doesn’t mean Christopher Columbus’ heroic voyage should be recast as a genocidal exercise to be remembered on “Indigenous Peoples’ Day.” And it doesn’t mean that the “Spirit of Stonewall” should take an equivalent place beside the Spirit of ‘76.

Far too much of the rhetoric we see from the left today is designed to weaken our conception of ourselves as a nation and blur the distinction between citizen and foreigner into non-existence.

Gavin Newsom, California’s ambitious Democratic governor, accused his state’s Republicans of “fear of the other,” as though that invalidated their concerns over their national integrity. New York City Mayor and presidential no-hopeful Bill de Blasio, meanwhile, told Americans that if you “feel you're falling behind” or “feel the American dream is not working for you: the immigrants didn't do that to you.”

Putting aside the fact that Newsom and de Blasio are dead wrong on the economics — illegal immigration absolutely hurts wages and job prospects for the most vulnerable Americans — the sentiment they’re expressing completely misses the point.

American patriotism is not about being cruel or hateful towards immigrants, foreigners, or even criminals who break our immigration laws. It’s about understanding ourselves as a distinct people who expect — no, demand — that the politicians and elites who guide our great shared institutions, both public and private, do so for our benefit first.

America is the most benevolent nation on the face of the Earth. We have saved entire continents and routed out tyrants from far away lands to support the God-given liberties of non-citizens.

If our politicians can’t distinguish between people who are born into the generations-long story of America, or are welcomed into it in accordance with our laws and culture, and those who break our laws and demand entry while waving the flags of other countries, then they don’t deserve the support of the American people.

That’s why liberals seek to blur the distinction between citizens and foreigners. It’s the only way they can even hope to get away with advocating for providing taxpayer-funded healthcare to illegal aliens before every one of their fellow Americans has the best care possible.

So this Independence Day, let’s look back on our proud history and remember that some people are Americans and others are not. That’s what “declaring independence” is all about.

Jerry Falwell, Jr. is the President of Liberty University