Is The Bike-Lane Fever Breaking?

Jeff Jacoby
|
Posted: Jan 09, 2019 11:30 AM
Share   Tweet
The opinions expressed by columnists are their own and do not necessarily represent the views of Townhall.com. 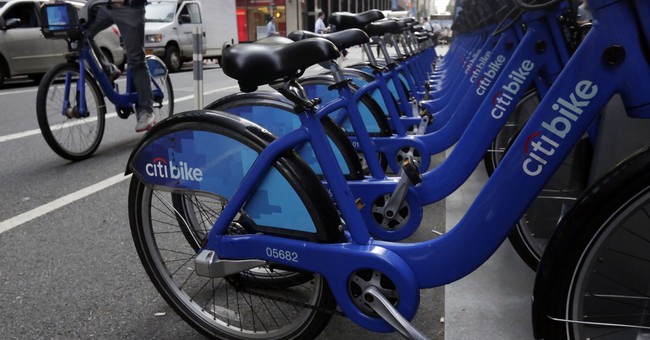 SEATTLE IS one of the most bicycle-friendly cities in the United States — by one reckoning, themost bicycle-friendly. It's also a city in which bike commuting is rapidly losing its appeal. In 2017, according to recent Census Bureau data, a mere 2.8 percent of Seattle's workforce commuted to work by bicycle. That was down from 3.5 percent in 2016, and from 4 percent in 2015. The Seattle Times reports that bike commuting in the Emerald City has fallen to its lowest level in a decade. In raw numbers, the number of people cycling to work in Seattle has plunged from a peak of 16,000 to fewer than 12,000 — a decline of one-fourth.

It isn't only Seattle where the bloom is off the cycling rose. Between 2016 and 2017, bicycle commuting dropped by 12.1 percent in Boston, by 13.7 percent in Atlanta, by 19.9 percent in San Francisco, and by 24.1 percent in Austin. Nationwide, the average number of Americans using a bike to get to work fell to just 836,569, a decrease of 3.2 percent over the past year. It was the third consecutive annual decrease — at a time when the number of US workers is climbing. (Note: The Census Bureau asks about biking only in the context of commuting.)

Considering the billions of dollars that federal, state, and local governments have poured into bicycle infrastructure over the past decade, the steady drop in cycling amounts to a sharp vote of no confidence in bicycles as the much-touted wave of transportation's future. So maybe it's time for public officials and policymakers to turn their backs on the militant, self-righteous bike lobby and its fantasy of a world in which drivers defer to cyclists as the rightful kings of the road. Bicycles — nimble, healthful, non-polluting, cheap — have many advantages. But they don't belong in crowded urban traffic.

There could be a number of reasons for the drop in bicycle commuting. Americans overwhelmingly prefer to travel by car, and lower gasoline prices are making it easier for them to do so. At the same time, more Americans are working from home, and so don't commute at all. It is also plausible, as the head of the California Bicycle Coalition told USA Today, that some commuters have switched from biking to ride-hailing services like Uber and Lyft.

Plainly, however, tens of thousands of Americans have had second thoughts about cycling to their jobs. And that's despite the recent mania for inserting bike lanes into city streets, which has everywhere disadvantaged the vast majority of commuters who drive in order to accommodate the tiny minority who bike.

Subtracting or squeezing already-crowded car lanes for the benefit of cyclists is a terrible idea. As bicycle lanes have worsened traffic congestion, they have led to a "bikelash" in communities as disparate as Los Angeles, Memphis, and Boise, Idaho. The doctrine that cars, buses, and trucks should "share the road" with bicycles sounds egalitarian and green, but it's as impractical as expecting motor vehicles to "share" urban thoroughfares with skateboards and strollers. The chief function of those roads is to keep people and goods moving as rapidly, efficiently, and safely as possible. Bike lanes unavoidably impede that function — often to the detriment of bike riders themselves.

"Cyclists are at high risk when they're on the road," observed environmentalist Lawrence Solomon in Canada's Financial Post. Citing data from Canada and Europe, he noted that the accident rate for bicycles is at least 26 times the rate for cars, explaining that dedicated bike lanes are more likely to cause accidents, especially when cyclists and drivers turn or cross at intersections. Within the European Union, cyclists accounted for 12 percent of all urban road deaths as of 2017. In the almost obsessively bike-friendly Netherlands, wrote Solomon, a whopping two-thirds of individuals seriously injured in road accidents were bicycle riders — the majority of them hurt not by cars but by poor road conditions or the cyclist's own negligence.

In the United States, meanwhile, the Transportation Department reports that the number of annual cyclist fatalities climbed 20 percent between 2007 and 2016.

For drivers and cyclists alike, the roads can be a challenge, clogged and dangerous. Where street space is scarce and traffic is heavy, bicycle lanes simply don't work. They may initially have seemed appealing, but Americans know better now. Commuting by bike is not the wave of our urban future. It's just another overrated utopian scheme.