Jeff Jacoby
|
Posted: Apr 26, 2017 10:45 AM
Share   Tweet
The opinions expressed by columnists are their own and do not necessarily represent the views of Townhall.com. 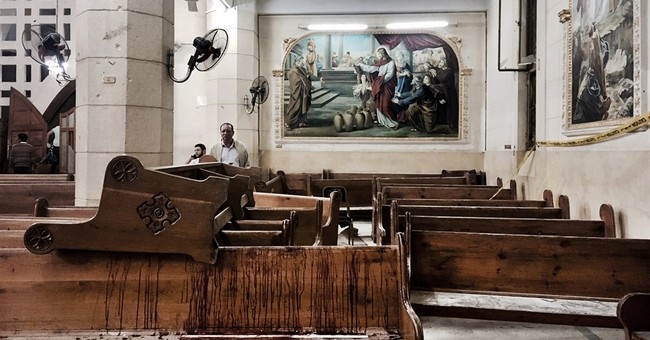 WORDS OF FORGIVENESS can be deeply powerful. They can also be deeply misguided.

On April 16, a savage named Steve Stephens shot and killed Robert Godwin Sr., a 74-year-old Cleveland man who was innocently walking home from Easter dinner with his children. Stephens recorded his cold-blooded act of murder, then posted the video on Facebook. For two days the killer was at large; he was eventually tracked down in Pennsylvania, where he shot himself as police approached his car.Even before Stephens was found, his victim's family announced, on national TV, that they had forgiven him. "Each one of us forgives the killer. . . . We want to wrap our arms around him," one of Godwin's daughters told CNN. Another said: "I hold no animosity in my heart against this man."

Godwin's children are devout Christians, and they attributed their instant willingness to forgive their father's murderer to their faith.

On the other side of the world, the Christian family of another murder victim was reacting in exactly the same way.

More than 40 Coptic Christians died when Islamic State terrorists bombed two Egyptian churches on Palm Sunday, and the widow of one of the victims, Naseem Faheem, was interviewed on Egyptian TV.

"I'm not angry at the one who did this," she said through tears. "Believe me, I forgive you."

Such expressions of unconditional forgiveness are profoundly affecting. The host of the Egyptian program was stunned by the widow's words; a video of his reaction — long silence, and an exclamation that "the Copts of Egypt are made of steel!" — went viral. When relatives of the parishioners murdered by Dylann Roof in a South Carolina church in 2015 declared their forgiveness for the killer, their words were all but universally praised. Admired, too, were the Amish parents and grandparents in Lancaster County, Pa., who reacted to the 2006 massacre of their daughters by proclaiming that they would "not think evil" of the man who slaughtered the girls, and that none of them "wants to do anything but forgive."

Rushing to forgive a killer may bring some solace to a victim's relatives, but by what right can anyone "forgive" the murder of another human being? I wish nothing but consolation and peace of mind for those who grieve. But no one is entitled to forgive an offender for a crime committed against someone else. Particularly when the offender has shown no remorse for the evil he committed, and done nothing to repair the damage he caused.

Many Christians believe that if they wish to follow in Jesus' footsteps, they must always pardon wickedness and pray for the forgiveness of evildoers. But no-strings-attached absolution is not what Jesus taught. "Forgive us our sins," he instructed his disciples to pray, "as we forgive those who sin against us." Against us — not against others. Everyone is free to beseech God's forgiveness on those who have tormented them. That is what Jesus did on the cross, when he asked God to forgive his crucifiers (who "know not what they do"). But Jesus never asked God to forgive the Romans who crucified so many thousands of other innocent men and women. And he certainly never instructed his followers to do so.

That is terrible advice. What would society become if the response to every act of brutality and cruelty — every murder, every rape, every armed robbery, every terrorist bombing — was ready forgiveness by thousands, or even millions, of other people? That isn't a path to compassion and social harmony. It is a recipe for callousness in the face of suffering, and an invitation to even more brutality.It isn't only the families of murder victims who seem to think reflexive forgiveness of killers is a good thing. After Godwin's children extended their forgiveness to the man who gunned down their father, Cleveland Police Chief Calvin Williams urged the entire community to do likewise. "They were forgiving of Steve for this atrocious act, and we need to follow their lead," he said.

Only the victim of a crime has the right to forgive that crime. That makes murder unforgivable under any circumstance in this world. And in the next? Not even God will forgive a killer who has not confessed his guilt and undertaken heartfelt repentance.

By all means fight the evil inflicted upon others. But never imagine that you have the right to forgive it.