Does A Police Officer's Race Matter? 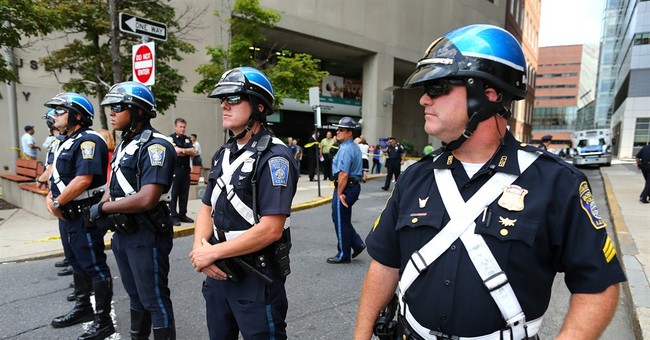 Can you judge a police officer's abilities by the color of his skin?

When Boston Police Commissioner Edward Davis earlier this month promoted five officers to sergeant, the commotion it generated had everything to do with the officers' race. All five happened to be white, even though the pool of 21 officers eligible for promotion on the basis of their Civil Service test scores had included nine nonwhite candidates. The commissioner was blasted by a minority officers' advocacy group, which accused him of making a "conscious effort" to keep minorities from moving up.

Boston's mayoral hopefuls jumped on the issue. "How can we have a city of Boston that's 53 percent people of color," demanded City Councilor Charles Yancey, "and not have one person of color heading up any of the 11 police districts in the city of Boston?"

Davis pleaded in vain that there is more to police leadership than color. "I'm not going to promote every single time based on race, which is what they want me to do," he said. "I'm going to pick the best people for the positions." Nevertheless, he quickly added two black officers to the promotion list, and vigorously affirmed his commitment to a "diverse" police force. If his hands weren't tied by state law, which restricts most promotions to candidates who score well on the Civil Service exam, "our police force would look much more like the city in terms of diversity," the commissioner insisted.

The racial makeup of Boston's police force has long been a source of stress and frustration. For years critics have argued that the Civil Service exams —multiple-choice tests that reward memorized book knowledge — can't measure many of the qualities that effective police supervisors need, such as a knack for leadership, good communication skills, integrity, and sound judgment. Davis isn't the first commissioner to complain about the tests' inadequacy; his predecessors were vexed by them too. Last year Davis proposed spending $2 million on a project to overhaul the BPD's promotion system to advance more minority officers. Meanwhile, when it comes to his command staff — where he is free to disregard Civil Service scores — Davis has named the most diverse group in the department's history: White men account for fewer than half of the chiefs, superintendents, and deputy superintendents on his team.

The arguments for a more holistic means of screening officers for promotion sound plausible. Yet I never see the subject raised other than in the context of "diversity." The deficiencies of the existing test become an issue only when there are complaints about too few racial minorities being promoted. Does that mean that there is something wrong with the test? Maybe.

Or maybe what it means is that Boston's police department cannot readily escape the persistent racial gap in learning and test scores that has been so extensively documented in American life. The average black high school graduate reads and writes at the level of the average white 8th-grader; black students taking the SAT college entrance exam score (on average) 200 points below white students taking the same exam. It's easy to blame a test for the achievement gap it reveals. It's a lot harder to implant the educational values, habits, and skills necessary to actually close that gap.

It has become an unchallenged truism that police departments must "look like" the communities they serve, especially in cities with large minority populations. Plainly there is great value in having police officers who can move easily in minority neighborhoods or interview crime victims in a language they're most comfortable with. When there are minority cops patrolling the beat in minority neighborhoods, residents are less likely to resent the police as alien occupiers — and perhaps more likely to come forward with information that can prevent or solve a crime.

Yet it's one thing to say that a racially mixed police force can reduce public suspicion of law enforcement, or help in practical ways to make a city safer. It's something very different to suggest that racial diversity should be pursued for its own sake, and that there is something inherently foul about a promotion list that doesn't include a certain number of blacks or Hispanics. If the Civil Service test needs improving, improve it. But let's not be seduced by the false assumption that, ideally, the demographics of a police department should match those of the population.

On the contrary: Ideally, the demographics of a police department shouldn't matter. No one imagines that Boston's cops should mirror Boston's population in terms of religion or party registration. Boston needs to recruit and promote skilled, honest, and committed police officers; most residents would agree that it's irrelevant whether they happen to be Methodists or Mormons, Republicans or Democrats. Maybe it's still not possible to be quite so nonchalant when it comes to race. But shouldn't that be the goal? Fifty years after the March on Washington, shouldn't public officials be able to acknowledge that there is always a serious moral objection to treating skin color as a job qualification? Even if, for the moment, there is no easy way around it?