The jobs report looked good on the surface. Headline rate down to 8.2%. But, non farm payrolls were anemic. Some would say, a disaster. Quick someone call FEMA. We aren’t adding jobs at all, and the labor participation rate keeps falling.

In order to spin the number positively, you’d say that the labor participation rate falling isn’t a big deal because it can be attributed to baby boomers leaving the job market. Or, they might say that automation is eating jobs, since our productivity at lower labor participation is holding steady.

However, even though the headline rate continues to fall, people all over America are hurting in the worst economic period we have seen since the 1930's. It’s brutal out there. My wife and I went shopping at a meat market the other day and we were the only people NOT using food stamps. 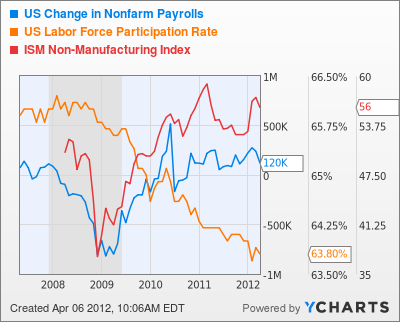 US Change in Nonfarm Payrolls data by YCharts

I made this chart on Ycharts. It’s interesting to see the correlation between the change in payroll growth (blue line) and the non-manufacturing ISM number(red line). I tossed in the labor participation rate line since so many look at it.

Recall, the huge stimulus was passed in March of 2009. There is a definite turn in all three lines after the stimulus was passed. Democrats will rely on that in the next election. However, just like the later 1930's, we are running out of other people’s money. The momentum has petered out, and all the chart lines are retracing.

Our economy continues to sputter. Obama likes to say the Republicans ran the car into the ditch. It’s Obama’s plan and vision that keep that proverbial car in the shop. Time for a new mechanic.